Well, according to Stanley Coren, a professor of canine psychology at the University of British Columbia, they are! Based on Coren and his research Golden retrievers are the 4th smartest dog breeds! Border Collies, Poodles, and German Shepherds are the only breeds that are smarter than Golden retrievers.

Are Golden retrievers smart and how do we know?

What makes Golden retrievers actually smart, how do we really know that they are the 4th smartest dog?

The first one is the number of repetitions necessary for the dog breed to learn a new command. Golden Retrievers, being smarter dogs, required fewer repetitions to learn basic commands.

The second factor is the success rate that a dog breed obeys a known command on the first attempt. Basically, this means, the higher the success rate the smarter the dog, which then means that they’re considered “more intelligent”.

There is one more way to measure a dog’s intelligence! We can see how intelligent a dog is by taking a look at a dog’s instinctive and adaptive intelligence.

For example, just like their name says Golden retrievers love to retrieve, so they’ll happily retrieve things for you! Even without you asking!

Adaptive intelligence is what a dog can learn without you explicitly teaching them.

This sounds a little bit confusing, so I’ll use an example. When you’re leaving for work, you tell your Golden retriever to go to its crate. This happens three, four, five times, but then one day your dog will see you getting ready for work and go to its crate without you telling them. This is then considered adaptive intelligence, which they learned from a previous experience.

It’s not possible to talk about a Golden retrievers intelligence without mentioning their EQ – emotional intelligence.

Their EQ is another important trait that makes Golden retrievers smart dogs. They just know when you are happy or sad, angry or exhausted. They simply have an amazing and unbelievable understanding of humans and their emotions.

Did you know that Golden retrievers are the most common dog breeds used as service dogs? Well, their EQ is why they are great service animals! Thanks to their EQ they are amazing at helping people, and they are highly sensitive to people who are in pain or hurting. 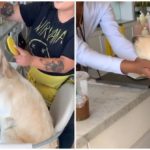