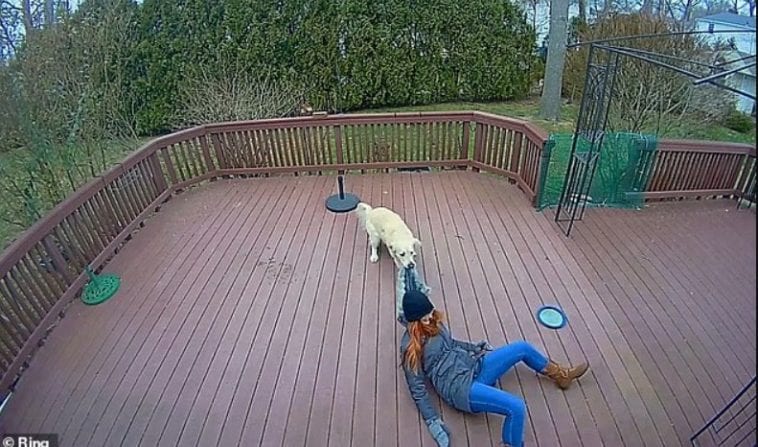 This is the hilarious moment a golden retriever drags his owner around her backyard by her fur-lined hood after mistaking it for a fluffy toy.

Footage shows the woman being tugged to the floor by her pet, called Grissom, as she laughs hysterically.

The clip was posted online by Ring, a security camera company based in Santa Monica, California.

As Grissom clamps down on her hood, the dog owner can be heard saying: ‘Oh my god. No one prepares you for what you do when this happens.

Despite her attempts to retrieve the hood, she is dragged to the floor by her golden retriever and screams ‘no’ while creasing up with laughter.

The dog owner shouts „let go of my hood! „, as Grissom tries to pull her to the other side of the decking.

After a brief moment of respite, the golden retriever starts tugging once more and she says: „He’s trying to do it again! „

Towards the end of the clip the dog owner is seen still lying on the floor as she attempts to pat Grissom’s head while asking: „Where are you? „

The video was shared alongside the caption: „Dog mistakes furry hood for a toy and drags his owner around the backyard deck while she is laughing hysterically. „

Social media users reacted to the highly amusing footage, with one posting: „The fact that she’s laughing and not mad at the dog just makes it 10x better. „

Another wrote: „She was laughing so hard that she didn’t think to unzip the coat. „

A third joked: „Legend says, even today, her laugh still echoes in the woods. „

A fourth added: „I had already lost it at “This is not how I want to go out Grissom” and then her laugh just made it worse. What a great laugh lol. „ 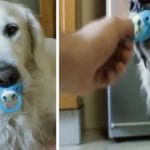 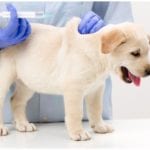