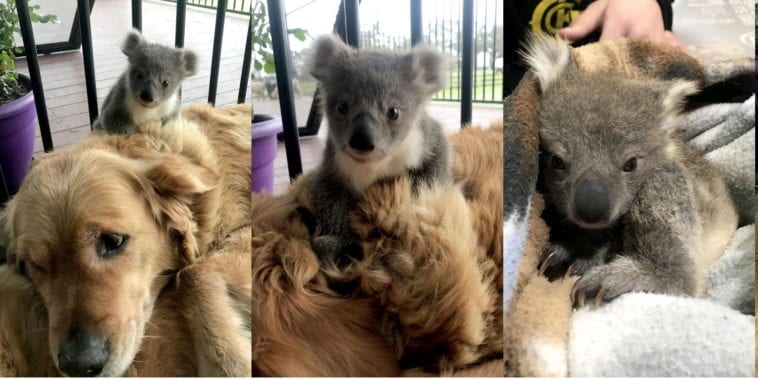 One of the most heartwarming scene between animals occured in Australia.

Once more, this is a proof that Golden retrievers have the biggest hearts!

Kerry McKinnon from Strathdownie in Western Victoria is the proud mommy of a Golden retriever named Asha, and he recently prepared the biggest surprise of her life by bringing home a baby koala! Believe it or not!

The temperatures in the area of Victoria sometimes drop down to 5 degrees Celsius (41F) , which can be very dangerous to animals that don’t have thick fur coats.

“It was quite early in the morning, and my husband yelled out to me to come have a look at something,” Kerry (45) recalls in an interview to News.com.au. “I didn’t know what he was talking about at first, but then I saw this tiny baby koala snuggled on top of Asha. I just burst out laughing. Poor Asha didn’t know what to think; she just kept looking at me with such a confused look. She looked a bit guilty when I came out to see what was going on. Her expression was hilarious.”

Kerry have to admit that at the begining she didn’t like the idea that her dogs have new friend.

“She kept looking back at the koala bear, but she wasn’t trying to get him off her or anything. She was happy to let him snuggle into her” she remembers.

READ  A new beginning: This woman held a maternity-shoot for a pregnant Golden to celebrate her being rescued off the street!

It is still unclear as to how the koala ended up on Asha. Most likely it happened due to the baby koala being separated from its mother since it was still young enough to be living with her. “I think the koala bear baby fell out of his mum’s pouch and didn’t know what to do. He would have just wandered over to our back porch and seen the dogs in their beds, then decided to snuggle in Asha’s fur because it’s nice and warm.”

Luckily the little baby koala bear ended up in really safe hands (or should I say paws) “Asha definitely saved the koala’s life by keeping him warm. He would have died out there if left alone all night. The poor thing could have been taken by a fox or something too.”

And this amazing story has its happy end. Local veterinarian checked baby koala and took the baby under their care, so they can release her back into the wilderness. 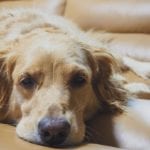 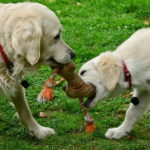