We don’t ever want to see our fur babies suffer, however, they too can get sick. We already know that dogs can be affected by a lot of the same diseases that we humans can suffer from, and cancer in dogs is no exception. Brain tumors, bladder cancer, and transitional cell carcinoma are just some of the types of cancer in dogs. That’s why it’s important that you as a dog owner know all the warning signs and help your dog get diagnosed as early as possible.

Cancer can affect dogs in a variety of ways. However, it’s important to remember that a cancer diagnosis isn’t a death sentence. Fortunately, there are numerous cancer treatment options available.

It affects dogs in the same way it affects humans. The uncontrolled development of cells in the body causes cancer. These cells might come from any part of the body. Cancer can extend and interact with the circulatory and lymphatic systems, as well as spread and infect other tissues in the body, if it is not detected and treated early.

Cancer is the biggest cause of mortality in dogs over the age of ten years. Half of all cancers in dogs, on the other hand, can be treated if caught early.

1. Lumps and bumps
2. Strange odors
3. Abnormal discharge from the eyes, mouth, ears, or rectum
4. Swelling in the abdomen
5. Wounds or sores that do not heal
6. Weight loss
7. Appetite changes
8. Coughing or breathing problems
9. Pain

Tumors in dogs typically appear as fleshy yet firm lumps of tissue beneath the skin and fur of the dog. Not all tumors will be visible from the outside. Tumors can sometimes be seen, but they can also be hidden deep within the dog’s body. Early detection and treatment, on the other hand, are critical for preserving your dog’s health and quality of life.

The most common type of tumor in dogs is cancer. It’s fairly common in some dog breeds, like Golden Retrievers. Most skin cancers can be seen with the naked eye, which helps find them early. Don’t ignore a strange lump or bump on your dog.

Early diagnosis is the key to effective treatment and a better prognosis for any type of cancer. Cancer often spreads to other parts of the body if it is not found early enough. 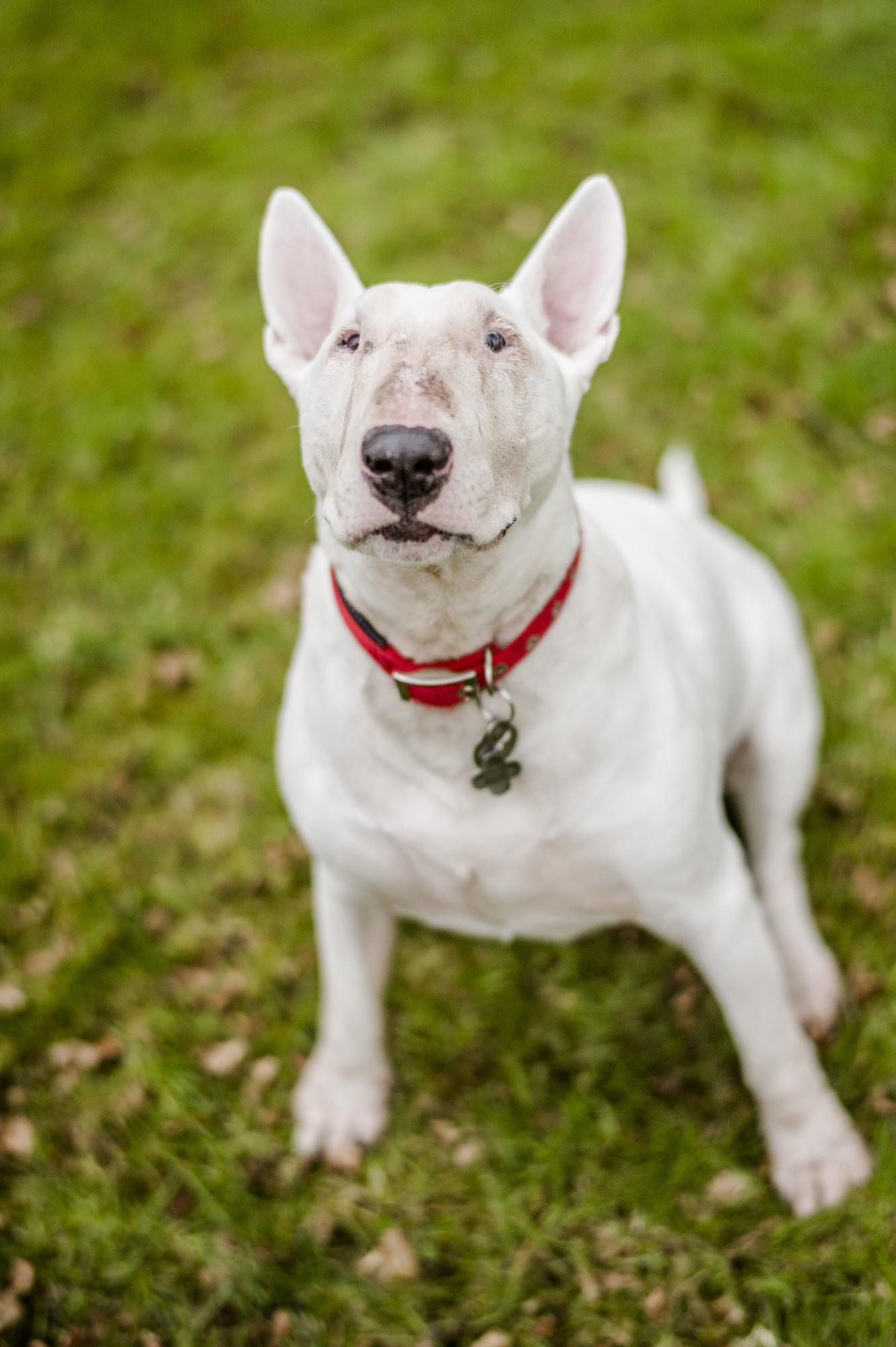 Dogs can get different kinds of cancer on their skin. The type depends on what part of the skin is affected the most. These are the three most common kinds of skin cancer in dogs:

Malignant melanoma. Most of the time, this kind of skin cancer happens in the mouth or on the mucous membranes. They tend to grow quickly and spread to other parts of the body. Malignant melanomas look like raised, often ulcerated bumps.

Squamous cell carcinoma. They are very aggressive, but they don’t tend to spread to other places. Most of the time, these tumors show up on your dog’s belly. Because this spot has the least hair to protect it from the sun.

Mast cell tumors. This is the type of skin cancer that dogs get most often. Mast cells release histamine, which is the chemical that causes some of the signs of an allergic reaction. Most of the time, these tumors form on the arms, legs, and chest.

Cancer in dogs is a tumor that grows in the lining of the liver. The liver is the organ that gets rid of toxins from the body. It also helps digest food and does other things. Most cancerous tumors come from cancer that has spread from another part of the body. Cancer that starts in the liver is very rare.

Dogs can get several different kinds of liver cancer. Hepatocellular carcinoma is the one that happens most often. Other kinds are rare. During your dog’s regular checkup, your vet may notice something wrong. Hepatomegaly, which is when the liver gets bigger, abdominal pain, and pain when you touch the liver can all be signs of serious conditions like this one.

When you put pressure on your dog’s stomach, he might feel uncomfortable or even hurt. Most of the time, this cancer has spread to other parts of the body, so the dog may be in pain from its primary tumor. 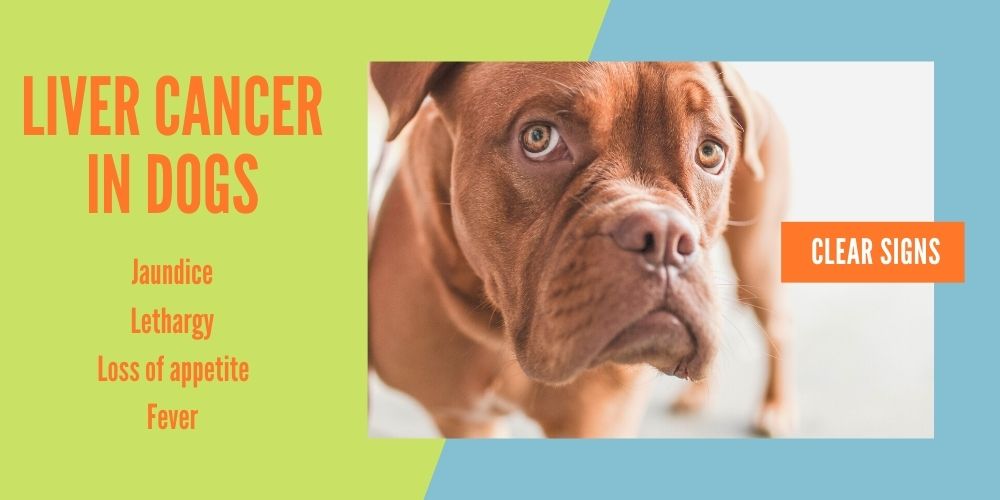 Even though liver cancer sounds scary, there are different treatment options. It depends a lot on how big and what kind of tumor has formed. If there are several masses all over the liver, the tumors can’t be taken out surgically. If cancer hasn’t spread to other organs, dogs with tumors that can be removed may be able to live for up to five years after the surgery.

On the other hand, liver tumors that can’t be removed can have a much worse prognosis. Most dogs only live between 3 and 6 months after getting the diagnosis. Chemotherapy can slow the disease’s progress, but it usually can’t cure it. 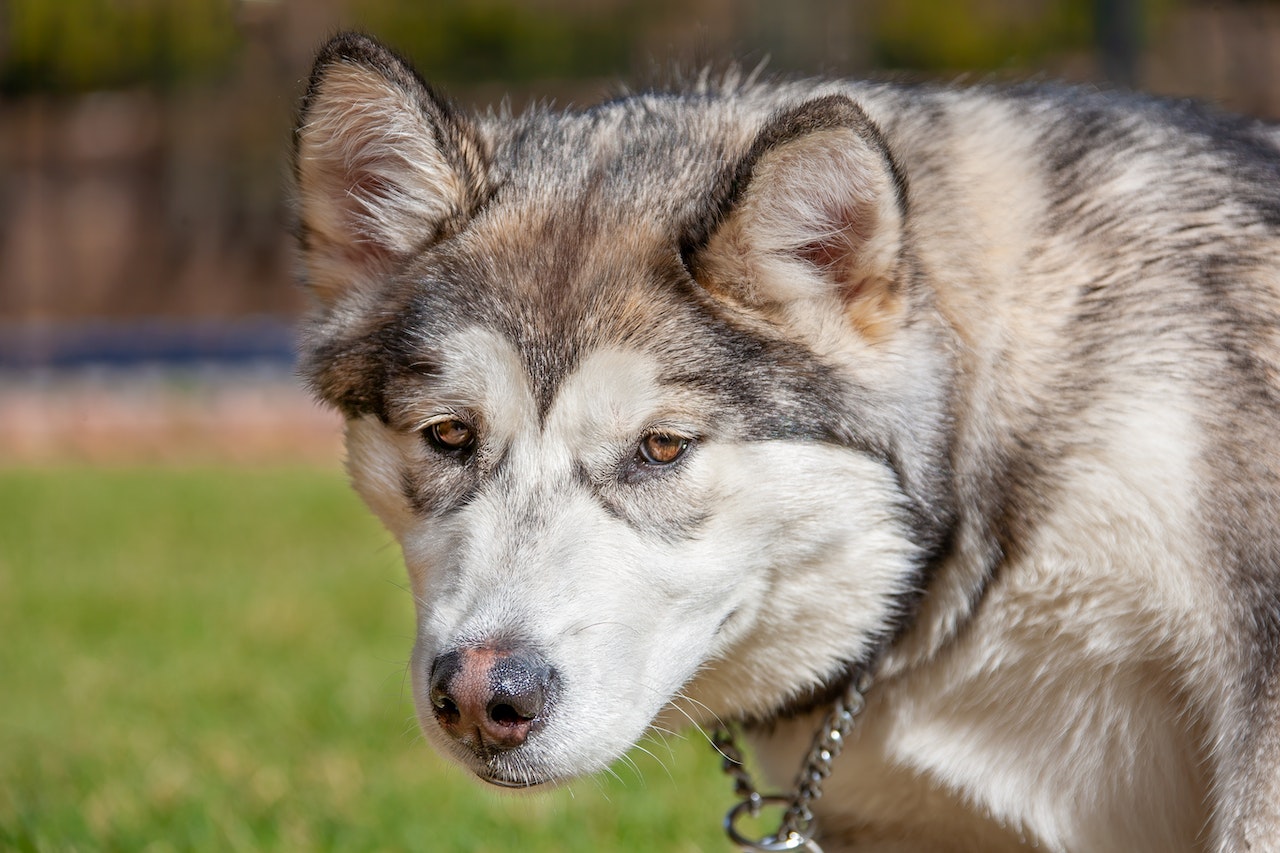 Depending on where the primary tumor is, the signs of hemangiosarcoma will be different. When hemangiosarcoma grows inside a dog’s body, it can cause blood loss into the abdomen or the space around the heart, which can make the dog weak, lethargic, or have pale gums. Hemangiosarcoma is often found in Golden Retrievers, German Shepherds, and Labrador Retrievers.

When owners take their pets to the vet because they are feeling weak, they may find out that a tumor has burst inside and needs surgery right away. Before surgery, it is important to check the blood to see how many blood cells there are, how well the blood clots, and how well the organs work. X-rays of the chest and an ultrasound of the abdomen will show if it is safe to give anesthesia and do surgery, and an ultrasound of the abdomen will show if there are any signs of spread that are big enough to see. Surgery is the main way that most dogs with hemangiosarcoma are treated, no matter where the primary tumor is. Metastasis may be put off by chemotherapy given after surgery.

Osteosarcoma is a primary bone tumor in dogs. It commonly develops in the bones of the limbs, but it can also form in the skull, spine, or ribs, and it can also develop in non-boney tissues including mammary glands and muscle. 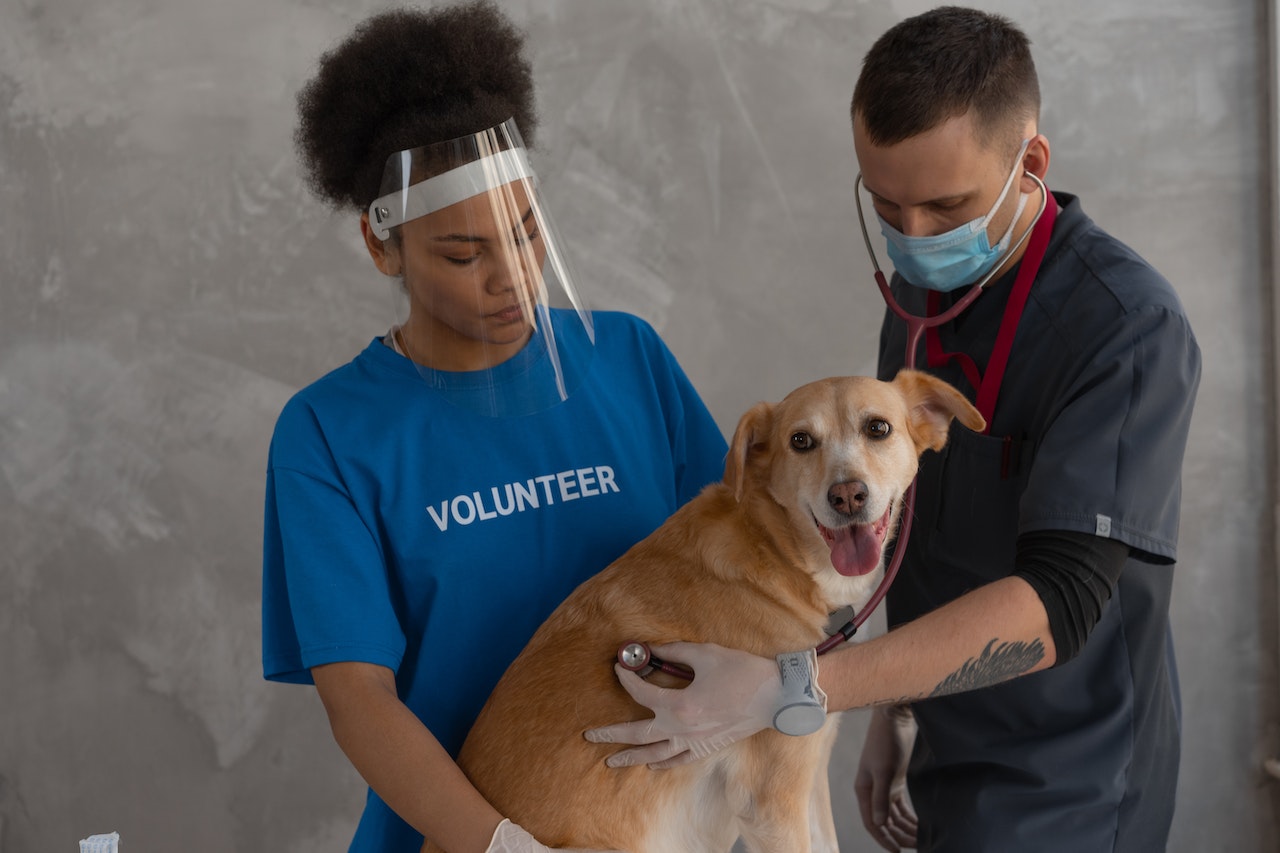 Obtaining x-rays of the afflicted spot is the initial step in treating a patient suspected of having an osteosarcoma. While x-rays alone cannot be used to diagnose osteosarcoma in dogs, they can be used to make a tentative diagnosis, and biopsy is not always required. In addition, x-rays of the lungs are taken to rule out the presence of any tumors that can be detected in the lungs.

The optimum treatment would be total removal of the main tumor, which almost often necessitates amputation. Many dogs do exceptionally well after amputation, but there are certainly those patients for whom this is not the best option.

The cancer cells have most likely spread by the time we diagnose the osteosarcoma. This indicates that they have traveled away from the initial tumor and are now located elsewhere in the body. These cells will eventually produce secondary tumors in the dog’s body. Chemotherapy is administered in this scenario to slow the growth of these cells into secondary tumors.

The average survival period after surgical removal of the tumor and subsequent radiotherapy or chemotherapy is 10-12 months, with a probability of 12-25 percent for a 2-year survival rate. Dogs who are not treated survive 1-2 months.

How long can dogs live with cancer?

How long a dog with cancer can live depends on two main factors: When the cancer was diagnosed, and what type of cancer it is. Early diagnosis is crucial for a successful treatment and, as a result, a longer life expectancy for your dog! Tumors in the early stages of cancer rarely spread and create other health problems. Aside from that, the sort of cancer your dog has is also very essential.

The odds of problems are reduced when cancer is diagnosed early. The tumor didn’t have an opportunity to spread or cause additional organ harm. Not all types of cancer are equally invasive.

Another major issue is that some cancers are “silent,” meaning they do not create symptoms until they have progressed. Make sure you understand the type of cancer your dog is suffering from.

Early recognition of cancer in dogs saves a dogs life

The topic of how long can a dog live with cancer has no common answer. It relies on a variety of factors, as we’ve already mentioned. We can’t predict whether your dog will live to a normal lifespan or succumb to cancer in a matter of months.

All of these considerations must be taken into account before setting any expectations. Obviously, your veterinarian will discuss it with you as well. But, regardless of the diagnosis, remember that the last thing you want to do is give up hope straight away.

When it comes to cancer, the most important consideration is your dog’s mental health. How well are they persevering in the fight, and how much energy do they have to keep going? As difficult as it is, sometimes the only thing we can do is let go before our animal friends’ fragile bodies suffer too much.

Can dogs smell cancer in humans?

Have you ever heard about dogs ‘smelling’ cancer in humans? Is there really any truth to that? Yes, it is true! Different diseases, inflammations, and malignant cells in a person’s body or bodily fluids can be detected by a dog’s sensitive sniff.

Changes in the smell of our skin, breath, excrement, urine, and sweat are the most typical ways that dogs detect cancer. So you could say that in a way dogs do smell cancer in humans.

Dogs can detect a variety of cancers. Melanoma, on the other hand, appears to be the most frequent. Dogs frequently lick a particular region on their owners’ skin, which is later diagnosed as melanoma. The canines that identified the melanoma were mostly untrained. Trained dogs can identify a far wider range of malignancies than untrained dogs.

Dogs that are trained to smell cancer in humans are called “medical detection dogs“.

Dogs taught to identify breast cancer were also able to detect melanoma and lung cancer, according to one study. This demonstrates that a common odor can appear in a variety of cancers.

How to prevent cancer in dogs?

Unfortunately, cancer is the biggest cause of mortality in dogs. Because the majority of cancers have a genetic basis, there isn’t much that owners can do to prevent it in their pets. There are, however, some decisions you can make to reduce your dog’s risk of contracting it.

To begin, you should engage with a responsible, recognized breeder who has paid attention to cancer in their pedigree and sought to eliminate it, according to the AKC.

Another thing to consider is spaying and neutering your pets. According to a new study, spaying or neutering a puppy before sexual maturity can raise the likelihood of some tumors forming. Spaying and neutering dogs could triple or quadruple their risk of developing certain malignancies.

Controlling your dog’s weight is the most critical thing you can do to keep them fit, healthy, and cancer-free for as long as possible. Make sure your dogs eats a healthy and balanced diet and gets enough exercise on a daily basis.