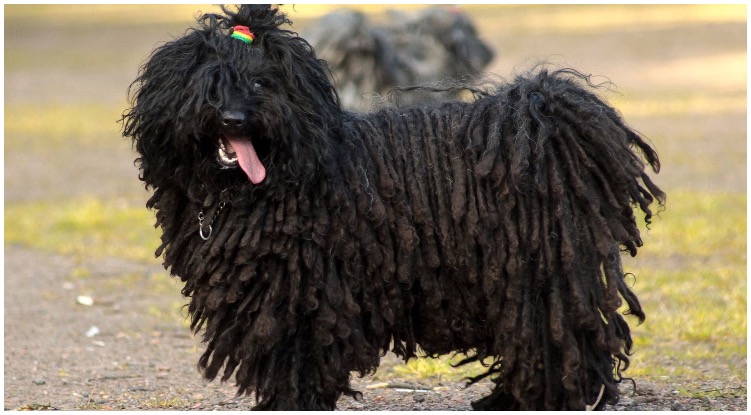 The Puli – the Hungarian name for “guide” – is a dog breed with a long history that is not yet too well known to us. He is also know as the dog with dreads.

The Puli is believed to be from Hungary. However, some people talk about his ancestors coming from Tibet or North India several thousand years ago.

His lush hair is definitely the one thing that makes him different. He is often named as a possible ancestor of the poodle. The Puli has its individual Rasta look and roots as a Hungarian herding dog.

History and origin of Pulis

It is believed that the ancestors of Pulis, as well as the ancestors of the larger Komondor, could originally come from Asia, more precisely from Tibet. This would also be supported by a similarity to the Tibetan Terrier.

However, an extensive gene analysis from 2017 with more than 13,000 dogs concluded that the pen is genetically located in a group between the poodle and the Schnauzer, which contradicts an origin from the Far East.

During excavations in Mesopotamia, much further west (the area of today’s Syria and Iraq), around 4,000-year-old amulets were found depicting dogs similar to today’s Pulis.

The fact is that in the 9th century the Magyars colonized the Carpathian Basin in today’s Hungary and already brought the first ancestors of the Pulis into the country.

For over a thousand years, the dogs were companions of the shepherds there. However, the number of ancestors of Pulis decimated significantly when the Ottomans in the 16th century Century conquered Hungary. The Habsburgs, who invaded a little later, even banned the breeding of their own Hungarian dog breeds.

The breed was first mentioned in written records in 1751.

It was not until 1867 that breeding was legalized and in 1915 a Hungarian researcher sought recognition by the FCI, which finally took place in 1954. In 1989, the German Puli Breed Club was founded. Meanwhile, the pen is also enjoying growing popularity outside Hungary.

At first, the appearance of the Pulis is reminiscent of the much larger Komondor because of the shaggy fur.

According to the breed standard, it should weigh between 10 and 15 kilograms depending on gender. He reaches the age of 12 to 16.

The waterproof dreads of this dog are usually black, pearl white or falcon, which refers to a pale yellow to light gray-brown coat color. The fur of black dogs can have nuances of rust-red or gray shades, while the pale pen should have a clear black mask.

The coat is very striking: the hair splendor hangs down to the floor in round cords. It forms during the first two years of life after the fluffy puppy hair dress has been taken off and the fine undercoat with the coarser top coat has been heavily felted.

Over time, the coat grows slowly, so it is not replaced. With this hair dress, the pen can perfectly regulate its body temperature. Unfortunately, the coat can smell very strong in wet conditions because of the remaining dead undercoat.

Typical of the appearance of the sweater is that the cords cover his eyes, which sometimes severely hinders his field of view. The dog has floppy ears and beautiful, dark, almond-shaped eyes. He wears his densely haired rod rolled up.

The dog with dreads have an independent character and are good guard dogs. They are also suitable as herding dogs for small animals as well as pigs and poultry.

This breed of dog has retained much of its originality. The Puli is considered a very intelligent, extremely learning, adaptable, spirited and vigilant dog. He is also said to have qualities such as independence, perseverance, agility, dominance, loyalty, willpower, courage and attachment. The Puli likes to work hard and persistently.

He defends his pack and his territory loudly barking and determined. He is rather suspicious of strangers, both humans and dogs. Pulis are often used as herding dogs for small animals, pigs and poultry. But they are quite capable of guarding herds of up to one hundred animals.

In order to drive the herd animals together, the dog fixes them with his eyes, barks them, or tweaks them in their heels. Her barking ability can be very annoying.

But he also proves to be a faithful companion within the family, who always tries to keep his “pack” together. He guards his property with Argus eyes. As with most dogs, the education of the Puli should also take place in loving consistency.

Taking care of a Puli

Pulis require a lot of space. If this running dog has enough exercise, you can also keep it in a smaller apartment.

Pulis are considered a very healthy breed. In order for this to remain the case, breeders pay particular attention to preventive examinations, e.g. whether there is a disposition for hip joint dysplasia, because of the low spread and the associated small gene pool.

Grooming is complex. In order to maintain its typical appearance, the Puli must not be combed or brushed. Rather, you have to “zot” the dog.

This means that the hair tips are pulled apart. This creates the characteristic cord or ribbon hair. Pulis are generally afraid of water, which is also due to the fact that the floor-length dreads of this dog quickly absorb water and hinders the dog from swimming.

These dogs should therefore only be washed as little as possible and only with clear water, but not during the cold season. It can take several days for the coat to dry properly again. In case of pollution, such as diarrhea, etc., you should only wash the dog off in places.

If you choose a pen, you should know in advance that this dog carries an enormous amount of dirt into the house due to its long, lush fur. Some owners shear their pen contrary to breed standards.

As a rule, however, this should only happen if, for example, the fur becomes a burden in older animals and restricts their freedom of movement, or if the bitch sheds her fur dress after the litter anyway.

So that he is not hindered when seeing, it is best to tie the dog’s hair together above the eyes. 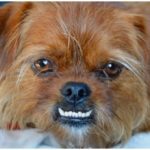 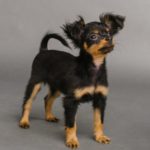