The Springer Spaniel is lively, intelligent, and eager to please. They appear to have a nice sense of humor and are content dogs. If raised with kids from an early age, they typically get along well with them. They are very loving with their whole families. They also get along well with other pets in the house, even the little ones. But as they were designed to hunt birds, they could mistake them for prey.

The English Springer Spaniel has long been a favorite of sportsmen because of the way he “springs” at game to flush it for the hunter. However, if given the proper training and exercise, this lively, beautiful dog can also make a wonderful family companion.

English Springers are medium-sized dogs with drop ears and the traditional gentle spaniel demeanor. Their dense, medium-length coat covers their little body and is ornamented with feathering, a longer hair fringe, on the ears, chest, legs, and belly. If two English Springer Spaniels were placed side by side, they may appear extremely different. This is because some hunting dog breeds are bred primarily to work in the show ring, while others are intended to work in the field. They eventually split into two distinct types, field and show dogs.

Both variations require a lot of activity. But if you’re looking for a companion, a field-bred Springer might be too energetic for you. Pick a dog with show ancestry. The exact opposite is true if you want a Springer that will compete in field trials. Therefore, while speaking with breeders, it’s imperative to be quite clear about what you want from a Springer.

History of the English Springer Spaniel

Spaniel-type dogs are believed to have originated in Spain hundreds of years ago. The Romans or traders are likely to have transported these dogs to other parts of the world. As early as 300 A.D., spaniels were referenced in Welsh law.

In paintings from the 16th and 17th centuries, spaniels with features resembling those of the modern English Springer Spaniel are shown. Before the invention of firearms, gamebirds or small animals were flushed by the spaniel by jumping at them and pushing them into the open where they could be caught by hunting hawks, coursing hounds, or nets thrown over them. Spaniels excelled at flushing wildlife for shooters when firearms were first developed in the 17th century.

Today the English Springer is a well-liked breed and is ranked 26th among the breeds recognized by the American Kennel Club. They are equally as popular as family companions, field dogs, or show dogs.

English springer spaniels, whether bench- or field-bred, are very sociable, playful, and clever dogs. They adore the water and will take advantage of any chance to splash around. Field-bred springers may have their hunting instincts piqued by cats or other small animals. English Springer Spaniels often get along well with kids and other animals. Similar to this, any remaining birds in a backyard may do so at their own risk. Because chances are your dog will hunt them.

English springer spaniels are quick to wag their tails and give people sloppy kisses in greeting, despite their hunting instincts when it comes to small animals. As someone approaches the door, they might bark alertly, but always more as a friendly greeting than as a warning.

The English Springer Spaniel is an intelligent breed. That combined with their inherent drive to work and hunt makes them adept at picking up cues. She would do well in agility training as well as in hunting and obedience contests. English Springer Spaniels enjoy having a task to complete. They will look forward to the daily training and preparation these events entail.

Even though the majority of English Springer Spaniels are quite open and friendly, it is still a good idea to socialize them to other dogs and people immediately away. This will ensure that your pup is calm, even tempered, and reliable in social situations.

Living with a Springer Spaniel

The English Springer Spaniel may fit in with a variety of environments and circumstances. But physical activity and social engagement are the two things that must always be a part of their lives. Both types of English Springer Spaniels are active dogs that should be taken outside every day, particularly in an area with lots of space to run around.

In a similar manner, both breeds of dog will form an immediate and strong attachment with the humans living in the home. If they are left alone for a period of time greater than a few hours, this may cause separation anxiety, which may lead to stress-related chewing or barking. A bored springer who is left outside alone for an extended amount of time may turn into a digger.

Aside from those factors, English Springer Spaniels are recognized for being low-maintenance, mellow friends who fit in well with a range of environments.

The grooming requirements for English springer spaniels are quite simple. Both varieties will benefit from a brush-down twice a week, while field-bred dogs are significantly easier to maintain due to their hair’s lower propensity to matting or holding burrs and dirt. They have a tendency to moderately shed, particularly in the spring.

The English Springer Spaniel is an eager and competent training partner due to their high level of intelligence. Use positive reinforcement methods, as they work best with this dog breed.

English Springer Spaniels have a double coat, so they do shed quite a bit. Their undercoat is short, soft, and dense, while their medium-length topcoat is flat or wavy. On their ears, breast, thighs, and belly, they have a fringe of feathering. Their coat sheds moderately most year, but it will shed more during spring.

There are many different color choices for English Springer Spaniels. The Springers with white markings and a black or liver base are possibly the most well-known. Field Springers tend to have more white so hunters can easily see them in the field, whereas Springers bred for the show ring typically have more color than white.

To keep your Springer looking his best and to prevent matting or tangles, brush him at least three times every week. Regular brushing will also help keep pet hair off your clothing and furniture. Take your dog for a trim every two to three months.

He needs to have his floppy ears checked and cleaned every week to avoid ear infections since they obstruct airflow. Use a cotton ball saturated with a cleaning solution suggested by your veterinarian to gently wipe out the ear, making sure to just clean the visible portion. Never insert anything, including cotton swabs, into the ear canal since doing so could harm it.

In order to get rid of tartar and bacteria, brush your Springer’s teeth at least twice or three times every week. Daily would be ideal, as it would prevent dog dental problems most efficiently.

If your dog doesn’t naturally wear down their nails, trim them frequently. This can be a tricky task for some dog owners, so if you aren’t sure how to do it, ask your dog groomer to do it for you.

English Springer Spaniels were bred to have a lot of activity and stamina. If you can’t give your dog enough exercise, he could grow anxious and destructive. This isn’t the right breed for apartment dwellers and couch potatoes.

English Springer Spaniels need a lot of exercise because they are hunting dogs. Keep them on a leash in unfenced areas because they can opt to go hunting on their own. Many owners of English Springer Spaniels who don’t hunt compete with their dogs in sports. You can try obedience, agility, flyball, and tracking since they are such gifted athletes. They also make excellent therapy dogs, cheering up patients in clinics and nursing homes.

If guests arrive at your home, English Springer Spaniels will bark, but if you’re looking for a guard dog, keep looking. They are kind, loving dogs who anticipate attention from even strangers.

These dogs are intelligent and eager to please, so training them won’t be a problem at all. Make sure you are using positive reinforcement methods, with a lot of treats and verbal praise. In addition to that, also socialize your dog as soon as you bring him home.

When you get home, some English Springer Spaniels may exhibit submissive urination. This is when they urinate in anticipation or fear. Making homecomings very low key in order to prevent this. Delay attention or gazing at your dog until you’ve been inside for a few minutes is the best way to handle this. Your puppy should outgrow this behavior if you do this. 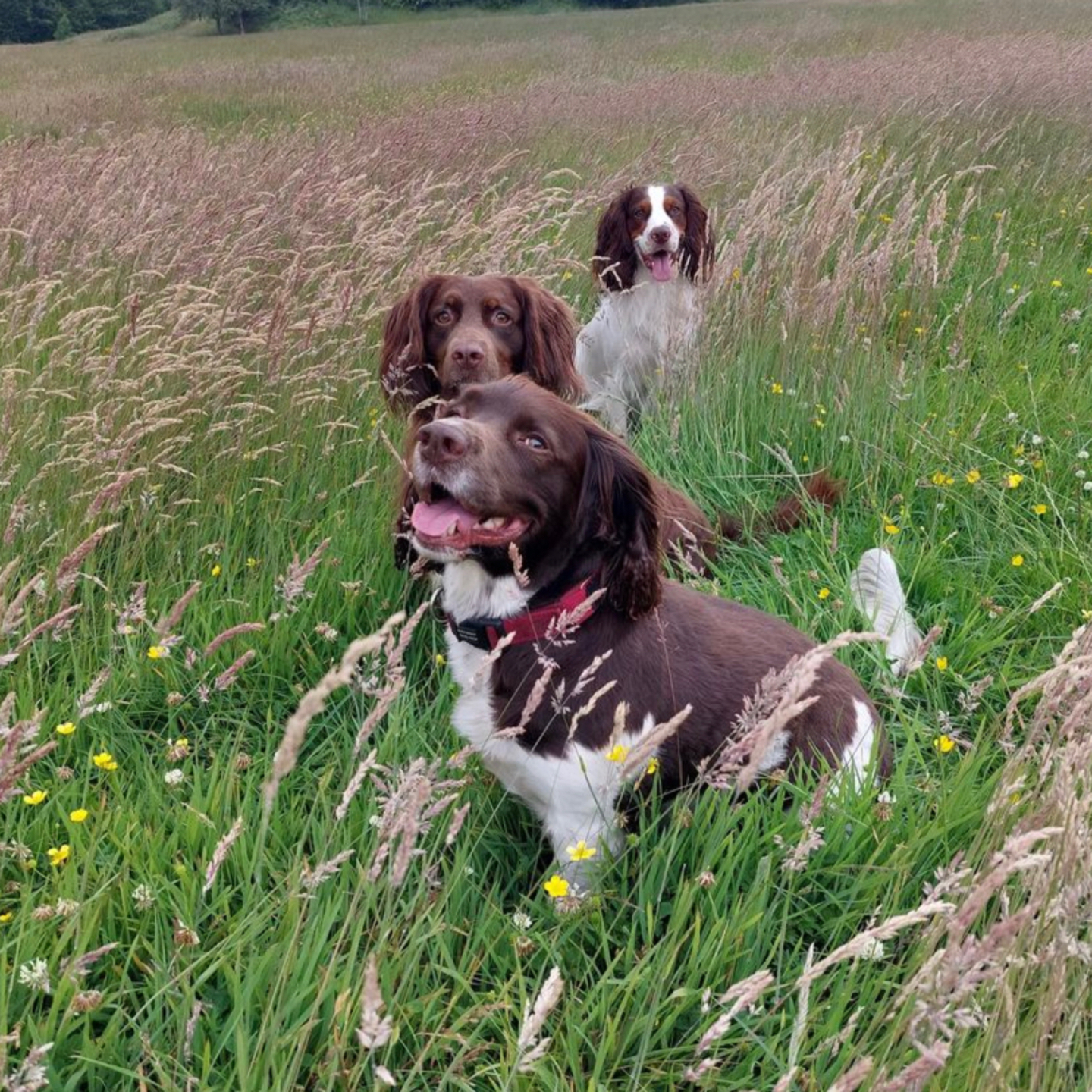 These dogs were made to be robust, so it’s no surprise that most of them are healthy. The average lifespan of this breed is 10 to 14 years. Their life expectancy can be even longer if you make sure your dog eats a healthy balanced and gets enough exercise.

However, that does not mean that your dog can’t get sick at all. English Springer Spaniels are susceptible to ear infections, as are most dogs with long ears, thus owners should constantly check and clean their pets’ ears to avoid irritation.

Additionally, if the breed’s needs for physical activity aren’t met, obesity can become a problem. Obesity can cause or worsen joint, back, or digestive issues, as well as the higher-than-average predisposition for diabetes in this dog breed. That’s why you have to make sure they are eating a balanced diet.

The English Springer Spaniel Field Trial Association (ESSFTA) lists elbow dysplasia or hip dysplasia, retinal dysplasia, and skin disorders as the other most prevalent health problems in this dog breed. Additionally, they are susceptible to Phosphofructokinase Deficiency (PFK). This can cause anemia and muscle discomfort.

In order to avoid these conditions, the most important thing you can do is to buy your puppy from a reliable breeder. Make sure the breeder did the necessary health tests for these health conditions. And that he has the papers to prove it.

Now that you learned so much about this fierce hunting dog breed, it’s up to you to decide if they are the right choice for you and your family. These canines need a lot of physical activity. They aren’t the best match for people who spend most of their time inside.

The English Springer Spaniel dog breed is best suited for hobby hunters, or people who enjoy the outdoors. If you can give them enough exercise, training, and love, then definitely consider adopting one of these puppies. You can also choose between the two variations. The field dog would be a better choice for hunters. While the show dog may be the better fit for active people who enjoy a family life.

Whichever of these two variations you bring home, make sure you also pay enough attention to their health. As we already explained, the English Springer Spaniel is probe to certain health conditions. That’s why regular vet visits are a must. And don’t forget about the vaccinations too!

Are you the proud owner of a English Springer? If so, make sure you leave us a comment telling us all about your adorable little pup. We are curious to know!