What is the rarest Labradoodle color?

There are three pretty rare Labradoodle colors: Red, Phantom, and Abstract. These Labrador Poodle mix puppies are the hardest to get your hands on, and breeders often increase their prices. But that doesn’t mean that other Labradoodle colors aren’t special. It’s up to you to pick the color or color variation that you like the most and then find a puppy matching that description. Let’s now dive in and see what it is that makes these three Labradoodle varieties so unique.

The rarest Labradoodle color is red. Due to the fact that their coat is a bit more mahogany than the one of a brown Labradoodle, these dogs look like living stuffed animals. Labradoodles are a teddy bear breed as it is, however, thanks to this adorable coat color, any of your guests could mistake your pup for a toy if they find them on the couch sleeping.

The color of their coat is similar to the one of an Irish Red Setter. But to be a real red Labradoodle color, their nose color has to be completely black. That gives them even more of that teddy bear look. The rarest color of Labradoodle dogs is also in pretty high demand, so don’t be surprised if you have a bit of trouble getting one of these dogs. Their price could be pretty high as well. 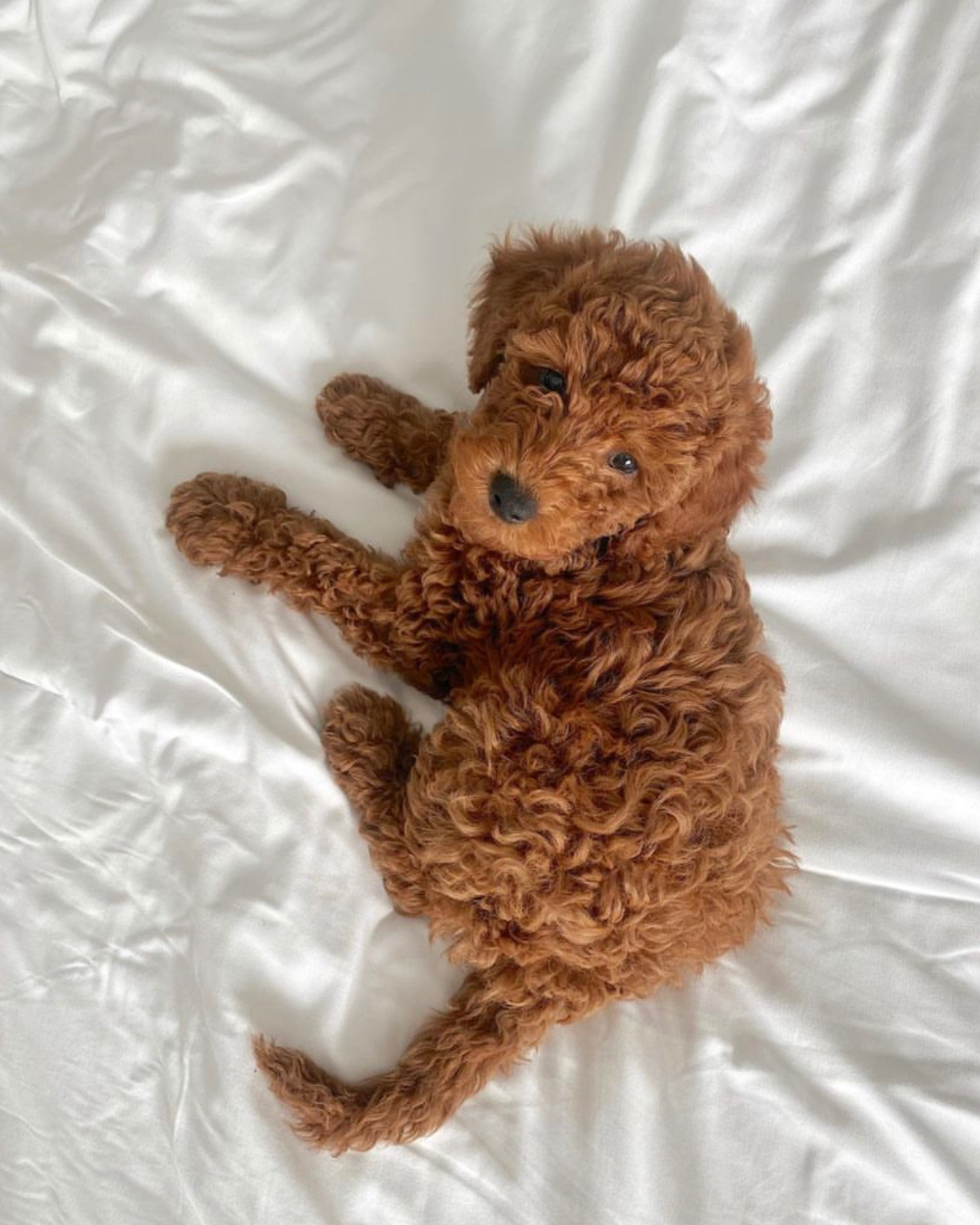 Have you heard about the abstract Labradoodle? Their fur color is pretty self-explanatory, it’s just an abstract mix of many different hues without any real pattern. So you could say that this Labradoodle variation is a work of art. However, for a Labradoodle to be considered abstract, he has to be less than 50% white. If that is not the case, then he is considered to have a parti Labradoodle color.

What is a Phantom Labradoodle?

We have already written about Phantom Poodles, but did you know that there are also Phantom Labradoodles? A Phantom Labradoodle puppy has a distinct coat pattern that makes him as unique as he is, and he can only inherit this coat from his Poodle parent. To be considered a “phantom”, dogs must have two distinct coat colors on specific parts of their bodies.

The dog’s body must be one color, usually black. The other hue appears above the dog’s eyes, on the face, to the side of the muzzle, and on the paws. A line of the secondary color will occasionally appear over the pup’s stomach or chest. As a result, the most prevalent Phantom coloration is black and gold or brown. However, other color combinations are occasionally found as well.

What is the most popular Labradoodle color?

This is pretty hard to tell. The most widely available one definitely is the cream Labradoodle color, however, grey Labradoodles, brown Labradoodles, black and white Labradoodles, and other solid color coats are pretty popular as well. As we have already explained, there are various colors and different shades to choose from when it comes to buying a puppy from a Labradoodle breeder. Both parent breeds, the standard Poodle and Labradoodle come in many different hues, so it’s no surprise that they can pass these color genes to their offspring as well.

What’s the most expensive Labradoodle?

This is pretty hard to tell! Labradoodles are expensive dogs as it is. The average cost is somewhere between $1,200 and $3,000. However, if you want one of those rare Labradoodle colors, like Red, Phantom, or Abstract, chances are that you will have to pay more than that. There is a lot that determines the price of a Labradoodle puppy. These include the type of breeder you are buying from, your location, the current demand for the dog you are interested in, and more.

The most expensive Labradoodles will be the ones coming from a champion bloodline. That means that his parents probably took part in dog shows, and they have the papers to prove that they are clear of any possible health issues that the Labradoodle could have. However, if you find a puppy that is less than $1,000 we would absolutely suggest being careful. There is a high possibility that it’s either a scam, or you are buying a backyard breeder. Even though backyard breeders are much more affordable, no one can guarantee you that the puppy you are buying doesn’t have any type of genetic disorder. 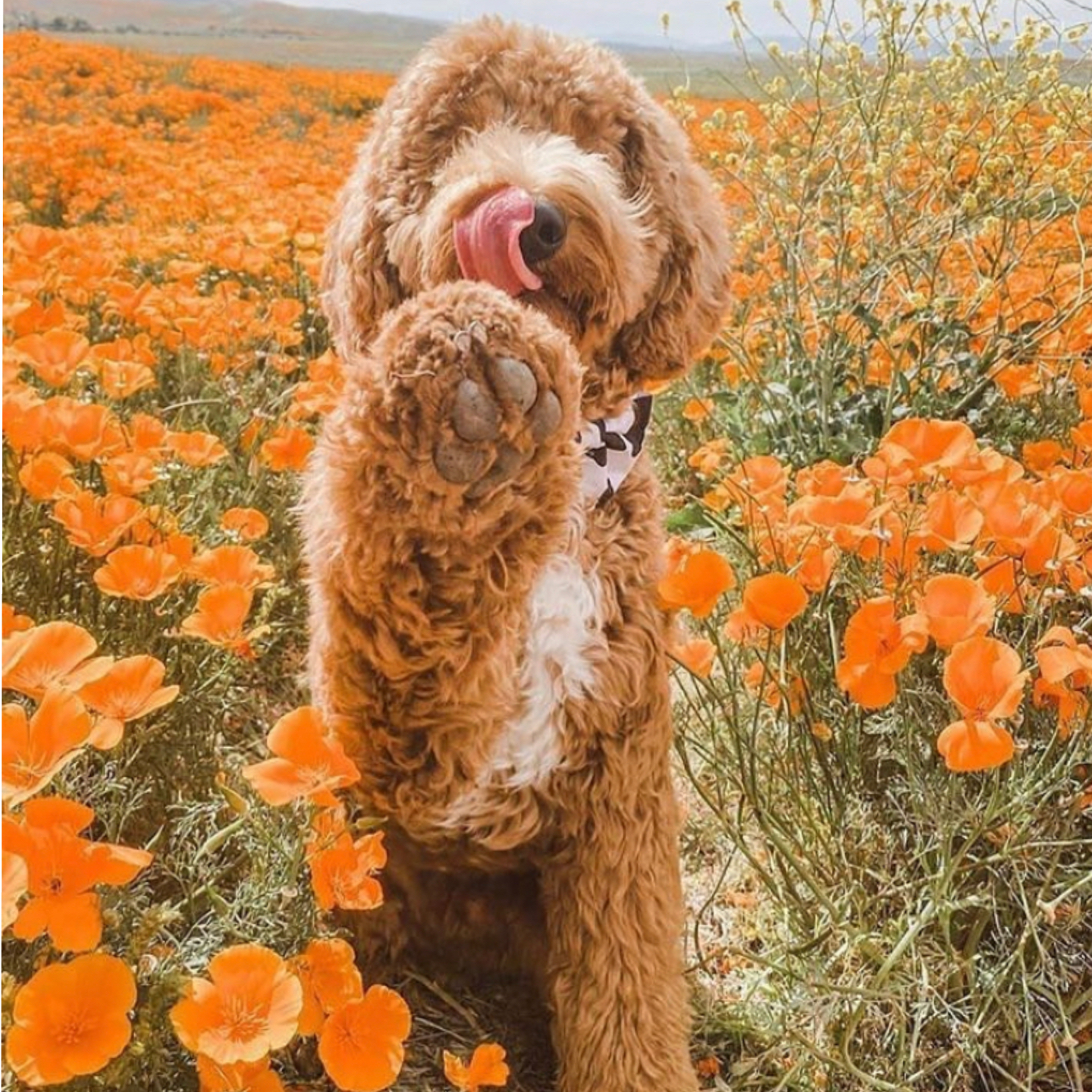 Although we all have some favorite colors when it comes to the Labradoodle, there are a few factors to consider. To begin with, color should not be your exclusive criterion for selection. Just because a puppy in the litter matches your best attire does not mean he is the perfect match for you and your family. As a result, it is critical to look beyond his coat color.

A professional breeder will match you with the puppy they believe is most suited to your lifestyle. For example, if your family isn’t the most active, they won’t pair you with their most lively pooch. Even if it is the only color you like in the litter.

Second, it is critical to understand that specific coat colors can have an effect on the dog’s health. A recent study, for example, found that chocolate-colored Labradors have a considerably shorter life than their black and golden counterparts. They also have a higher incidence of skin and ear disorders.

White and diluted hues in dogs are also associated with health issues. White dogs, for example, have a higher risk of hearing and blindness than non-white dogs. Diluted colors have also been connected to Color Dilution Alopecia, a disorder that affects standard-sized Poodles.

Although this should not dissuade you from getting a Labradoodle in these colors, it’s still something worth knowing. If bred by a professional breeder, the majority of Labradoodles with these colors should not be sick. However, if you do get a pup with these hues, be cautious of the symptoms connected with their potential pigment-related illnesses.

Why are there so many colors of Labradoodles?

The American Kennel Club (AKC) recognizes three standard Labrador Retriever colors: black, yellow, and chocolate. The AKC, on the other hand, recognizes 10 unique types of standard Poodle colors: apricot, blue, silver, gray, brown, cream, cafe-au-lait, and so on. Doing the math, it is not too hard to see why there are so many different colors available. Genes can be dominant and recessive, and each of these colors has different genetic makeup. That’s why it’s so hard to determine which color a puppy could be by simply looking at the parents.

Not particularly. As you probably already know, both Poodles and Labradors can be black dogs. So the number of black Labradoodles in a litter can be high. However, that doesn’t mean that these puppies are any less special. A black solid color coat looks beautiful on any breed, but especially on Labradoodles. Their other black features, like their black noses and black or dark brown eyes also add to their charm. In addition to that, black Labradoodles could be less expensive than other, more popular Labradoodle colors. So if you want to adopt a Labradoodle, and you don’t really care too much about color, then black could be a great choice.

There is no 100% hypoallergenic dog breed, however, Poodle mixes are pretty close to it. The Poodle is known for his curly coat that sheds only very little, and Labradoodles get their loose curls from their Poodle parent. So there is no reason why a Labradoodle with a black coat shouldn’t share the same qualities. They do shed significantly less than other dog breeds, however, dog hair isn’t the only allergen that could come from a dog. Some people will also develop allergies to dog saliva or dog dandruff. If you really want to get a dog, but you are afraid of developing allergies, make sure you spend some time with other Doodles and see if you will develop any symptoms.

Yes, they actually are. Not as rare as the red Labradoodle, however, they are still considered rare. While Poodles can often be found in white color, it is nearly impossible to see a fully white Labrador Retriever. That explains why it is so rare for Labradoodles to be white as well. That’s why Labradoodles can only inherit this gene from their Poodle parent. That lowers the number of white puppies in a Labradoodle litter, which makes them rarer than other color variations, like cream or brown, for example.