It’s no secret that we are both huge fans of Cane Corsos and Dogo Argentinos. These dogs are powerful, intelligent, and protective. In a way, they are also very similar. And not just when it comes to their appearance, but to their behavior and temperament as well. Both of them are part of the Mastiff dog family, and they show some of their best characteristics. These include incredible strength, cleverness, muscular bodies, and powerful jaws, but also the tendency to be stubborn. But as similar, as these two dog breeds are, there are still some key differences between the Cane Corso VS Dogo Argentino.

Cane Corsos have a long history, as these canines actually used to be Roman war dogs. They descended from the now-extinct Greek Molossus dogs and were later bred with different fighting dogs in England. This breed almost went extinct in WW II but became popular again all over Europe in the 70s. In the 1980s, the Cane Corso finally came to the United States.

Today, they are number 21 on the list of the most popular dog breeds in America. They are renowned for their intelligence, power, and affectionate nature. The American Kennel Club recognized this breed in 2010, and they describe them as “intelligent, loyal, eager to please, versatile, and intensely loyal to their humans”. 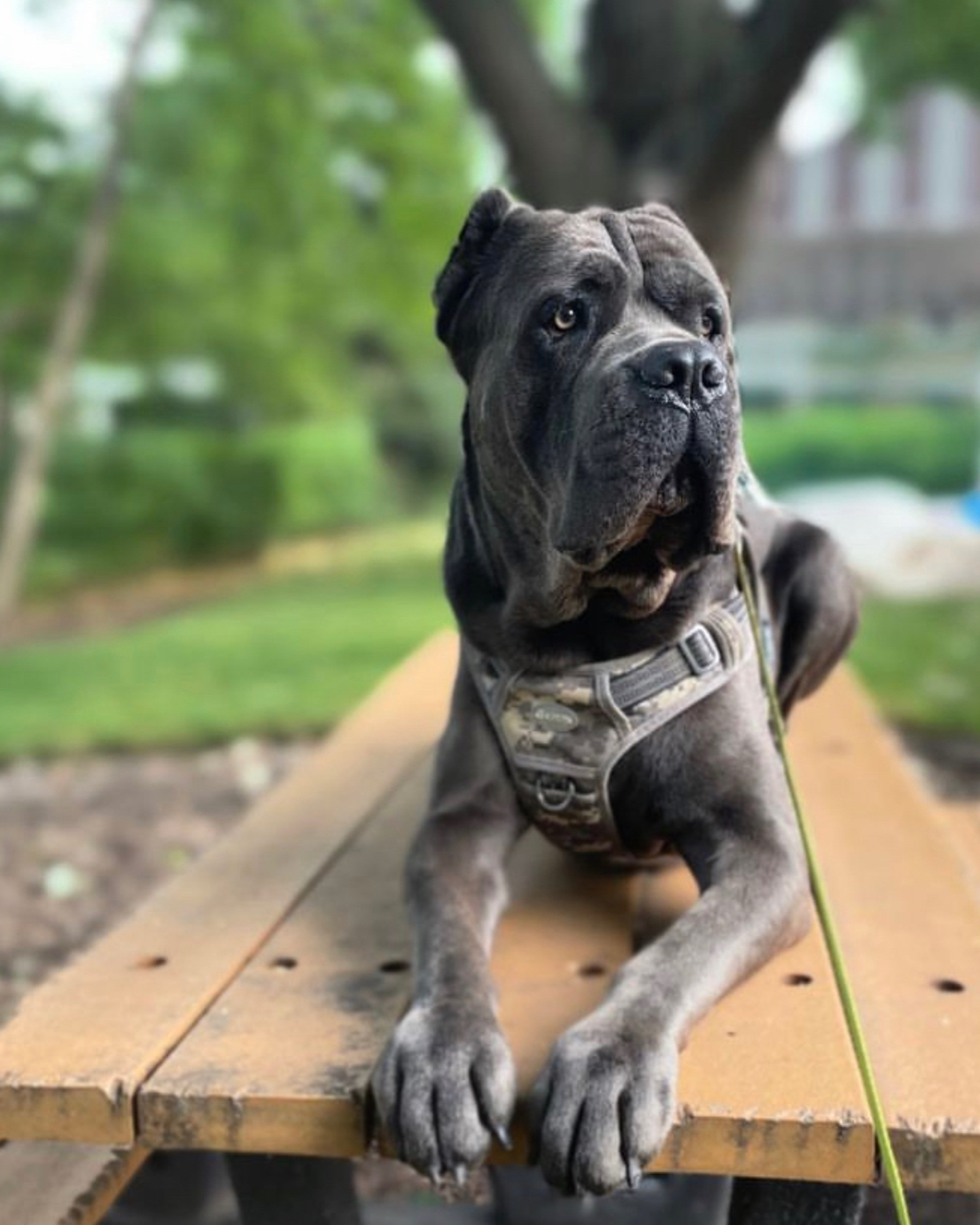 The Dogo Argentino dog breed was created by doctor Antonio Martinez in 1928 in Argentina. Martinez crossed the now-extinct Cordoba dog with mastiffs, bulldogs, boxers, and bull terriers. The goal was to create a loyal companion who is still fast and strong enough to hunt large game in the forests of Argentina such as wild boars. Later, they were used for fighting dog stock, which gave them the bad reputation that they still have to deal with today.

Even though Dogo Argentinos were used in dog fights, the Dogo Argentino dogs of today make amazing pets and loyal companions. Their official breed club, the Dogo Argentino Club of America was created in 1985. The American Kennel Club recognized them just recently, in 2020. And they are the 89th on their list of most popular dog breeds in the United States.

It’s no secret that these two powerful dog breeds are pretty similar. Looking at them side by side, it’s absolutely clear that both of them are part of the same dog family. However, there are still some key differences that could be a huge deal for anyone who is still considering which of these two canines to adopt. We will go over the main things that make them different, from their appearance, personality, and health, to maintenance. You can see for yourself which one of these would be a better fit for you and your family, or if both of these dogs would be too much to handle.

Appearance-wise, the Cane Corso and Dogo Argentino are very similar. Both are large and muscular dog breeds, with a stern look. The most significant difference would be their different colored coat. Dogo Argentinos have white coats, with a few possible black spots. On the other hand, the Cane Corso comes in many colors and patterns. Like grey, fawn, red, blue, brindle, or black. Both of them have glossy and short coats, but if you want more color variety, then definitely go for a Cane Corso.

The average Cane Corso is about 25 to 28 inches tall and weighs up to 110 pounds. On the other hand, Dogo Argentinos are 24 to 27 inches tall, and up to 100 pounds heavy. As you can tell, Dogo Argentinos may be slightly shorter and lighter, however, the difference is very small, and it call also vary from dog to dog. Both breeds are powerful weapons, with some of the strongest bites on earth. The Dogo Argentino has a bite force of 500 PSI, white the Cane Corso has a bite force of 650 PSI.

Looking at these two dogs, one will notice that while both breeds are muscular, there is still a difference in their body types. Cane Corsos are bulkier, while Dogo Argentinos look a lot more elegant. Dogo Argentinos have tall and slim legs and resemble more a Pitbull than a Mastiff dog. The head of a Cane Corso is significantly larger as well, which explains why their bite force is stronger. 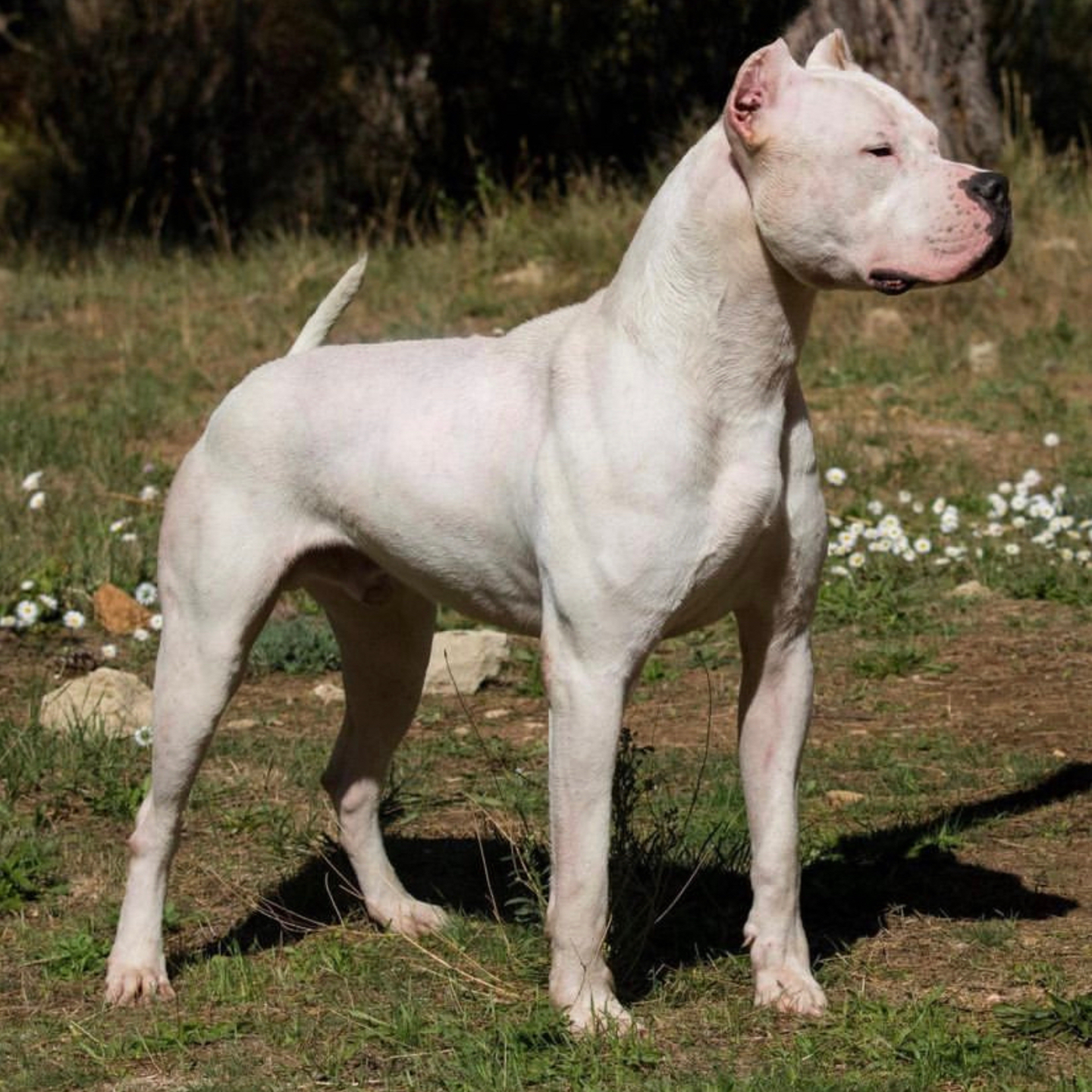 When it comes to their personality and temperament, both the Cane Corso and Dogo Argentino are true working dogs. Because of their strong bodies and stubbornness, they aren’t a good choice for first-time dog owners. However, when they are in the right hands and get the training and socialization that they need, these adorable dogs can make wonderful family pets. They are loyal, protective, and devoted dogs that love to be in the company of their humans.

The Cane Corso is a bit more submissive than the Dogo Argentino, which means that they could react more positively to training. However, that doesn’t have to be the case with every Cane Corso dog that you may come across. Both breeds absolutely adore kids and will do whatever is in their power to protect them. Dogo Argentinos can even be a bit too protective and territorial, which could become a problem if he doesn’t get the training he needs.

It’s no secret that Dogo Argentinos do have a worse reputation, as they did serve as fighting dogs for decades, and they are even banned in some countries like New Zealand, Turkey, and Denmark. However, don’t let that scare you too much. When handled by an experienced dog owner, these dogs are absolute sweethearts, that are very aware of their strength and size. Just make sure you don’t get such a powerful breed without realizing what you are getting yourself into.

The grooming wants of these two breeds are pretty low-maintenance. You only have to bathe them every couple of months, and in addition to that brush their teeth, trim their nails, and clean their ears from time to time. They do eat quite a lot, as they are active dogs. In order for them to get enough energy, make sure that their diet is protein-based, and that they eat at least two to three cups of dog food a day. 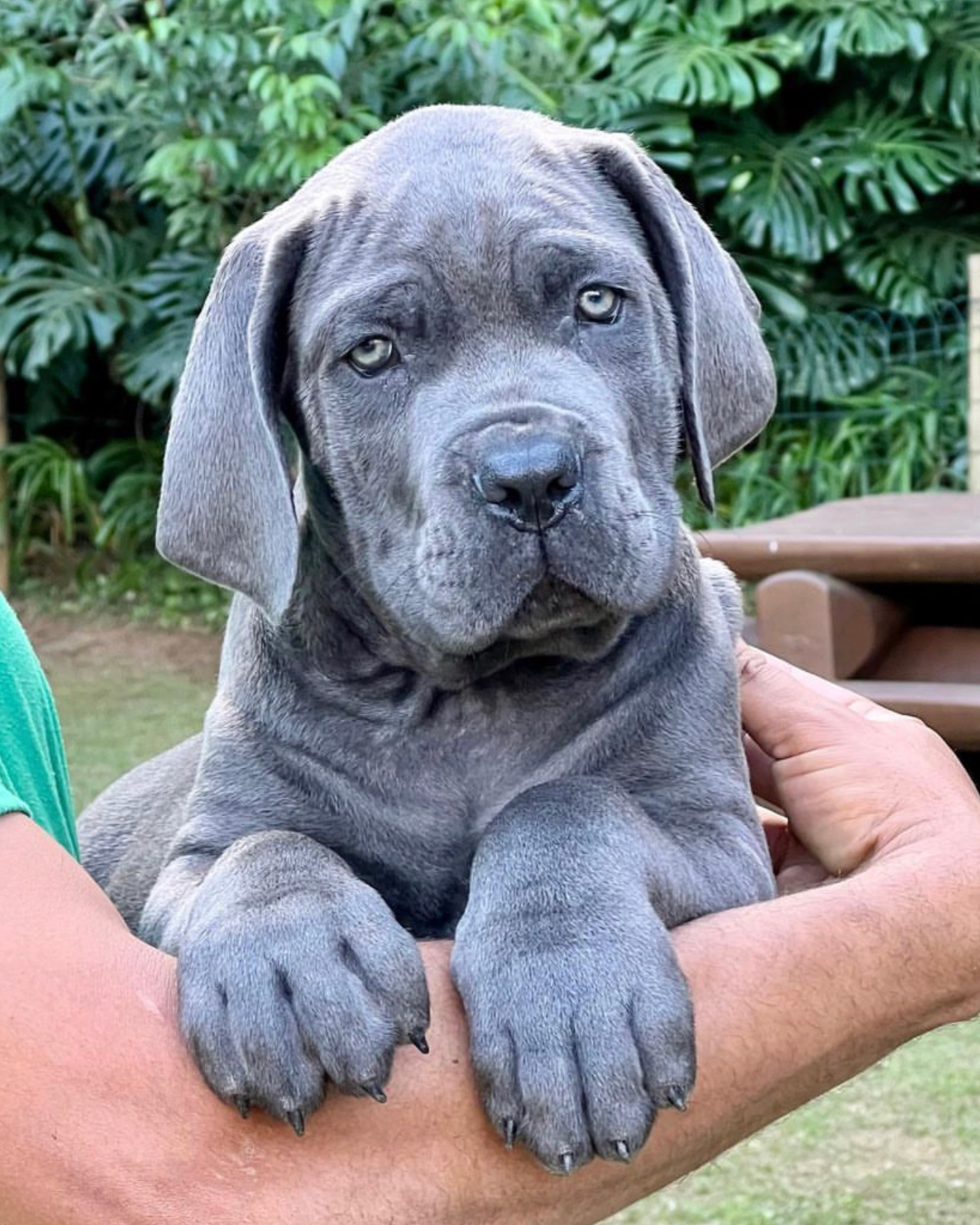 When it comes to their trainability, these dogs are smart but stubborn. Training them could be difficult because they really have a mind of their own. So if you never owned such a large dog breed before their trainability could be a problem for you. Make sure that you always use positive reinforcement and that you keep the training sessions short and sweet. That means that you always reward positive behaviors, and ignore negative ones.

Due to their history as working dogs, these canines can learn a number of different tricks and commands. However, for people without any experience in dog training, it could be nearly impossible to handle such powerful canines. So if you feel like you need some help, don’t be afraid to reach out and seek the help of a professional dog trainer. They could help your dog further enhance some of the best traits that these breeds have.

Cane Corsos and Dogo Argentinos have similar health issues and lifespans. Both breeds have an average life expectancy of 11 to 12 years. Given their size, it’s no surprise that both of these breeds are prone to hip dysplasia. This is a hereditary condition that could significantly lower the quality of your dog’s life, causing pain and loss of mobility. To avoid it, the best thing you can do is buy from a reputable breeder who screens his puppies and makes sure all of them are as healthy as possible.

Dogo Argentinos are also prone to hearing loss. Hearing loss is most likely connected to their white coat. Other conditions that are rarer, but can occasionally be found in both breeds include bloat, epilepsy, skin disorders, and thyroiditis. While these dogs are robust and generally speaking healthy, you have to be ready for possible health problems that can occur in any given situation. Take your dog to annual vet visits, and consider investing in a health insurance plan for your canine. 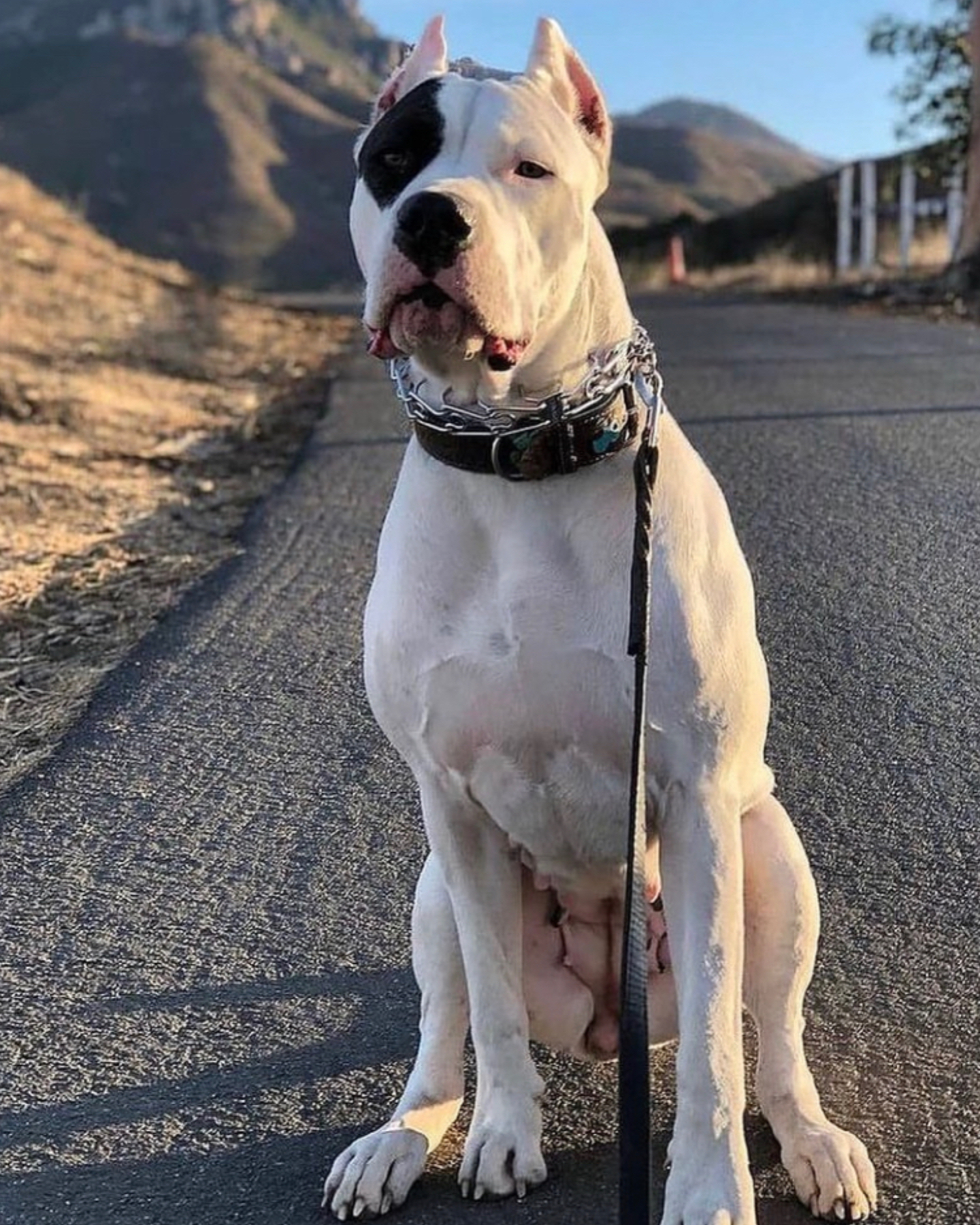 After learning the key differences between these two large dog breeds, it’s up to you to pick which of them you would make your canine companion. As you can tell by everything that we have said above, the characteristics of these dogs are pretty similar. They are large animals with a muscular stature, large heads, smooth coats, and triangular eyes shape. Both are working breeds that need high levels of obedience training, mental stimulation, physical needs, and socialization with different people and animals.

But when in the right hands, these big boys could be a great addition to your household. While these intelligent dogs are very protective of their owners’ children, because of their high prey drive, you should never leave them alone with babies or toddlers. So if you have small children at home, this trait should be a deciding factor. The risk is just too high, and accidents could easily happen.

These energetic dogs also don’t do too well in small spaces, so if you live in a city apartment, the Italian Mastiff and Argentine Dogo definitely aren’t the right dogs for you. So if you clicked on this article hoping to learn which is better, a Cane Corso puppy or Dogo Argentino puppy, it’s clear that we can’t give you a straightforward answer. While there are some key differences, there are still a lot of similarities. They would fit in the same types of families and living situations.