The Carolina Dog is a rare, but surprisingly old dog breed that is native to the United States. They are independent, medium-sized, nimble dogs who are renowned for being exceptionally clean. Other names for the Carolina Dog include the Yellow Dog, American Dingo, Dixie Dingo, and Yaller.

Because these purebred dogs aren’t that well known, they are often mistaken for mutts in animal shelters. The classic Carolina dog has pointed ears, a snout resembling a fox, and a tail that, when raised, twists like a fishhook. Although they resemble Australian dingoes, they are canis familiaris. They make great working dogs, village dogs, but workout buddies as well.

These dogs are pack animals at heart, and they would flourish in homes with both people and other dogs. You must keep a close eye on them near other tiny animals since they have a strong prey drive. They adore large households and those with yards for them to play in. Carolina Dogs are highly devoted to their owners and are kind and fun around children. They would make amazing family dogs for active people living in rural areas.

As great as these dogs are, there is probably a lot about them that you don’t even know by now. That’s why we will do a deep dive and see what it is that makes the Carolina dog so special. Be prepared that by the end of this article you will be more than ready to adopt one of these babies and call them your own.

The Carolina dog is a pretty recent breed, whereas several breeds have been improved and standardized for decades (or even centuries) by natural selection to form this robust and sturdy canine. According to the Saving Carolina Dogs rescue, the dogs were discovered roaming lose in the Southeastern United States in the 1970s.

So, from where did these dogs originate? According to North Carolina Public Radio, it is believed that Carolina dogs and the Asian pariah dog are descended from dogs that crossed the Bering land bridge with their human ancestors some 12,000 years ago. These puppies were probably long-term Native American companions, according to archaeological findings and DNA research.

I. Lehr Brisbin, a biologist and former researcher at the University of Georgia’s Savannah River Ecology Lab, is credited with discovering and naming the breed. He observed wild dogs on his excursions into the farms and swamps of the Savannah River Site. The live traps he used to observe other species occasionally caught the dogs.

They have been sighted in some areas of Georgia and South Carolina over the past several hundred years, where they have been living in the wild. Eventually, the Carolina Dog was rediscovered and domesticated. They go by the names Dixie Dingo, American Dingo, Yaller, and Yellow Dog as well. 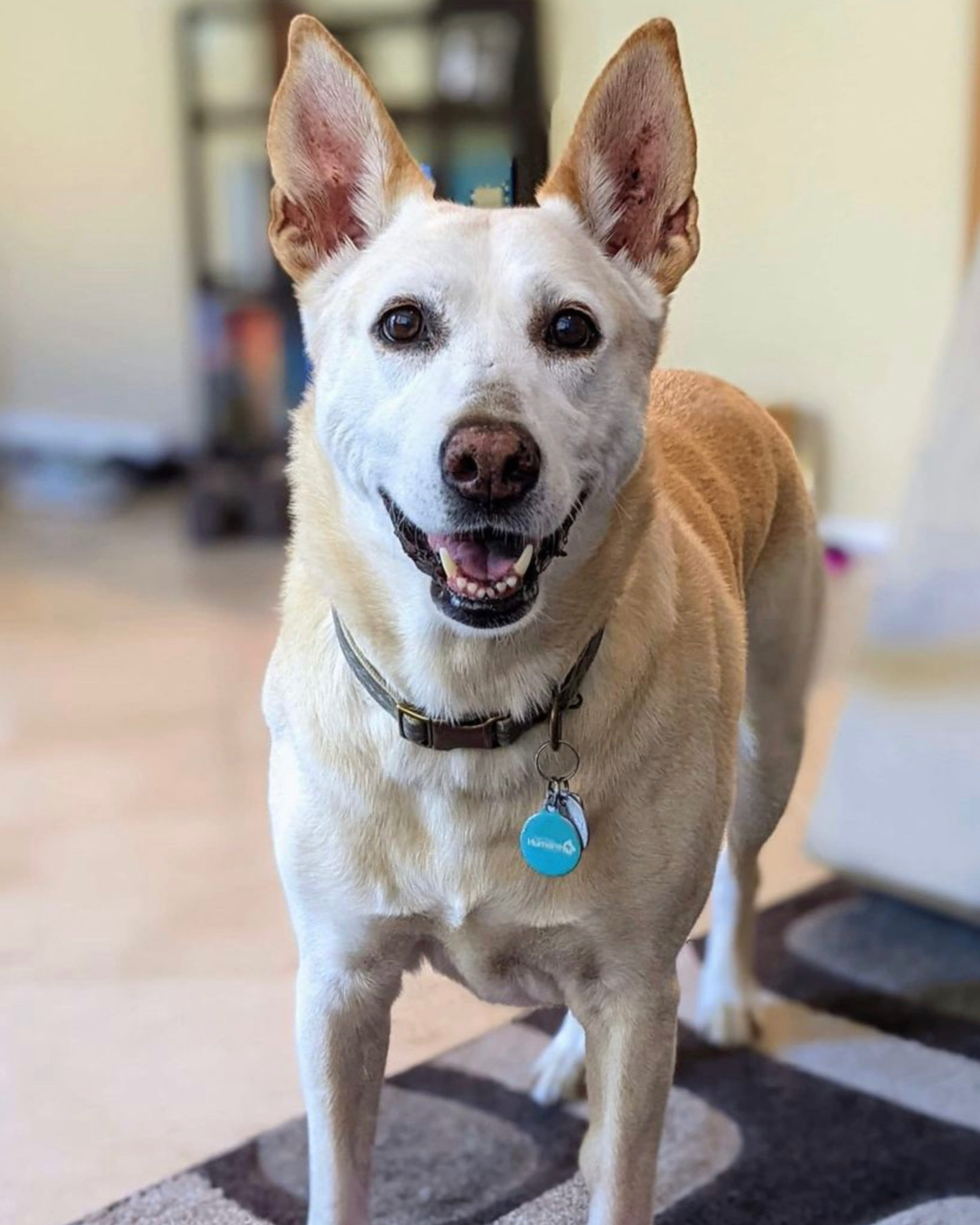 The Carolina dog is perhaps the ideal example of a man’s best friend: devoted, entertaining, watchful, and constantly eager for exploration. Carolina dogs are a relatively recent domesticated species that are renowned for being incredibly dedicated friends to humans they form strong bonds. These active, athletic pets must be close to their family since they have a strong pack mentality.

The Carolina Dog is extremely devoted to its owners and will develop close relationships with them, although they are not too effusive with licks and cuddles. They are good watchdogs since they are apprehensive of strangers and may display their suspicion.

Despite their high level of intelligence, Carolina Dogs are also stubborn by nature. Although they could be difficult to train, they do have a desire to please. Use positive reinforcement and exercise patience.  The Carolina Dog is additionally characterized as being strong, hushed, kind, courageous, cunning, and resourceful. They have been independent for hundreds of years, making them natural hunters with a wide range of climatic and lifestyle adaptations.

Being a pack dog, the Carolina Dog shouldn’t be left alone. This puppy would not do well in isolation. This dog enjoys playing with children, especially those they view as members of their family. As a pack dog, the Carolina Dog will thrive in a home where there are other dogs as well. Despite its affinity for other dogs, this breed has a high prey drive, so exercise caution around other small animals. But if you socialize your dog on time, he should be fine even around small kids and animals.

Caring for a Carolina dog

When it comes to caring for a Carolina dog, the last thing that you have to worry about is grooming. These puppies have a tendency to groom themselves like cats, so regular brushing and, if they come into contact with anything exceptionally filthy or unpleasant while exploring, an occasional wash, will keep them clean. You can also keep their mild shedding under control with brushing and baths.

Carolina dogs, like all breeds, learn best through positive reinforcement training and need their owner to be consistent and patient. Never be afraid to ask for assistance or enroll your dog in dog training classes. An important aspect of canine care is making sure Carolina canines get adequate playtime, exercise, and mental stimulation through athletic endeavors. In order to pass the time, a bored Carolina dog will bark, climb, dig, chew, and jump.

As with any dog, you should continue to take your Carolina Dog to the vet on a regular basis in order to catch any health issues early. Your veterinarian can assist you in creating a care routine. To keep fit, the Carolina Dog has to exercise for at least 60 minutes each day. Always have fresh water on hand for your dog to drink.

As the seasons’ change, so will the coat of your pup. Typically, it is denser in the winter and sparser in the summer. They frequently develop a rather thick undercoat during the winter. The Carolina Dog can very quickly adapt to practically any climate because of their adaptable coat. Despite having lived in the wild, they still require a home and the company of their human pack.

The coat of the Carolina Dog typically comes in a range of hues, including cream, tan, black, brown, and red. They frequently feature two or more of these colors in combination. They have short, dense coats, are immaculate, and groom themselves, much like cats. So there is little need to groom them additionally.

These canines are renowned for their cleanliness; they practically clean themselves. However, they’ll require assistance with their nails. Once or twice per month is usually enough to trim them before they get too long. This can be a tricky task for many dog owners, so if you aren’t sure how to do it yourself, ask your dog groomer.

Maintaining the dental health of any animal is one of the most difficult tasks involved in pet care. Your dog’s teeth need to be brushed at least three times every week. You can also use dog chews in between brushing to prevent dog dental problems. In addition to that, make sure your dog’s ears are clean as well. Use cotton balls and a cleaning solution every couple of weeks to clean their ears.

The Carolina canine is a generally healthy dog breed. Because they have lived in the wild for a long time, the standardized breed is robust and in better health than other over-bred dogs. However, that doesn’t mean that they can’t get sick at all. Like many other larger canines, the Carolina pup is prone to hip dysplasia and elbow dysplasia.

Hip dysplasia and elbow dysplasia are both developmental disorders that cause joints to form in an abnormal way. This defect causes the bones to wear down in an unexpected way over time, which can lead to osteoarthritis (OA), also called arthrosis, and degenerative joint disease.

There are two main causes: genetics and diet. No one knows for sure which genes are affected, but it is thought that more than one gene is involved. Nutritional research has shown that diet has a big impact on development as well. To lower this risk, larger puppies should be fed a special diet for large breed growth during their first year of life.

Luckily, most of them will live a long and healthy life with an average lifespan of 12 to 15 years, which is pretty good considering that they are a medium to large dog breed. It’s up to you as a dog owner to make sure your dog lives a healthy life with a balanced diet and enough exercise.

Before you get a Carolina dog

The Carolina dog is a fantastic friend, but not everyone should own one. Make certain you can provide them the exercise, time, and focus they require. Always keep in mind that these dogs need to be with their family, and they don’t do too good on their own. To truly understand what it’s like to live with a Carolina dog, be sure to speak with breeders or people who own one.

You never know what the future holds, and the first step before getting a dog is deciding if you can really afford one. Also, these pups need a pack leader as an owner. So if it’s your first time owning a dog, maybe go for a less demanding breed. Carolina dogs need lots of exercise, love to use back roads, and won’t leave you alone until they get their fill of morning adventure.

The good news is that you might live in a region where this breed is more common than you think. Be careful to regularly visit your local adoption and rescue organizations if you’re looking for a Carolina dog. Since many Carolina dogs are mistaken for mutts or unidentified mixes, some people might not even be aware that they have them. Check out the clubs, breeders, animal shelters and rescues.

Now that you have learned so much about this dog breed it’s up to you to decide if it is the right choice for you. As we already explained, they definitely don’t make a good fit for first-time dog owners. These canines require someone who will lead them and present themselves as an alpha. Once this dog feels like you are the pack leader, they will gladly follow all of your orders.

In addition to that, this also isn’t a good choice for busy, city-life working people. These dogs have lived in the wild for hundreds of years. So they enjoy being in nature more than anything else. Also, even though they seem strong and independent, they can still develop separation anxiety. They adore to be in the company of other people, but mostly their family members. That’s why they would make a great pick for people living on farms.

But all of that aside, the Carolina dog is an amazing breed that doesn’t get the hype that it deserves. They love to work and help you out. So if you are looking for a watchdog or guard dog that also loves to cuddle and play, then look no further. These dogs share the same great qualities as some other, more popular dog breeds, but they are yet commonly found in animal shelters.

Are you the lucky owner of one of these beautiful canines? If the answer is yes, make sure you leave us a comment. Tell us all about your gorgeous dog. We would love to hear about your experience with this breed. And we are sure that our other readers would also appreciate your input.