Australian Shepherds are not only beautiful dogs, but they are unbelievably brave, strong, and intelligent! It should be no surprise that the American Kennel Club has placed them in the top 15 of the world’s most popular dog breeds.

But, besides these coat colors, there are also coat patterns that are allowed by multiple kennel clubs including the American Kennel Club. One of those patterns is the piebald or merle coat pattern. There are even different merle pattern colors! In the case of the Australian Shepherd, it is Red Merle and Blue Merle.

In this article, we will look at the differences between a Red Merle and a Blue Merle. We will also answer frequently asked questions about the Merle pattern.

What makes an Aussie a Merle?

A change in a certain gene is what makes this type of coat.

Let‘s cover some Merle genetics 101. Basically, every dog has two copies of every gene. One copy they inherit from their mother, while they inherit the other one from their father. Now, depending on which gene is dominant, it determines your dog‘s coat color.

In the case of the merle gene, it is a dominant, recessive gene, meaning that only one parent needs to carry the gene, for the puppies to turn out merle.

Merle dogs can be any color, but their pattern is usually a marbled mix of darker colors on a lighter background. In the case of Australian Shepherds, we have the Blue Merle and Red Merle.

This type of coat is passed down from parent dog to puppy through genes. And what is interesting is that the gene that causes it can also change the color of a dog’s eyes and even some parts of its skin! Usually, it’s the dog‘s nose or paw pads.

But, despite producing a beautiful coat color, this gene can cause trouble for the dog and owner too. It has been shown that some merles, especially those with two merle parents, or also called double merle, are more likely to have serious health problems. Even their life expectancy is much shorter.

Red Merle Australian Shepherds don‘t have a bright red coat color. In fact, the red color spectrum is wide. That means that the coat of a Red Merle Aussie can be anything from light champagne to a strawberry blonde, Their coat can even be spotted with flecks of different colors. Besides that, it can be rust color, copper, sienna, or even brown-red. When it comes to eye color a Red Merle can have either blue eyes or solid brown eyes.

How can I tell if my Australian Shepherd puppy is Red factored?

Is Red Merle and Chocolate Merle the same?

No, Red Merle and Chocolate Merle are not the same. The Merle gene is simply a dilution gene. This means that it lightens whatever the coat color of the puppy would have been. But, the reason why the dog is not one solid color is that the lightning is not spread evenly over the coat. There are patches of undiluted color left on your dog’s body. That is why it is possible to have Chocolate Merle dogs as well.

The Merle gene is also not exclusive to the Australian Shepherd, it is possible to find it in other breeds such as Australian Koolie, Border Collie, Dachshund, French Bulldog, Miniature American Shepherd, Pyrenean Shepherd, Shetland Sheepdog, Great Dane, and so on.

A Blue Merle coat is a bit different from a Red Merle coat. The Blue Merle can have different patterns of colors. They might have a spotted or solid black coat. Especially on the legs and face. Besides that, these dogs often have white spots or spots of copper or tan all over their bodies.

The eyes of a Blue Merle may be one of the things that make it stand out the most. They can have brown, blue, or amber eyes that are solid, marbled, or flecked with color. 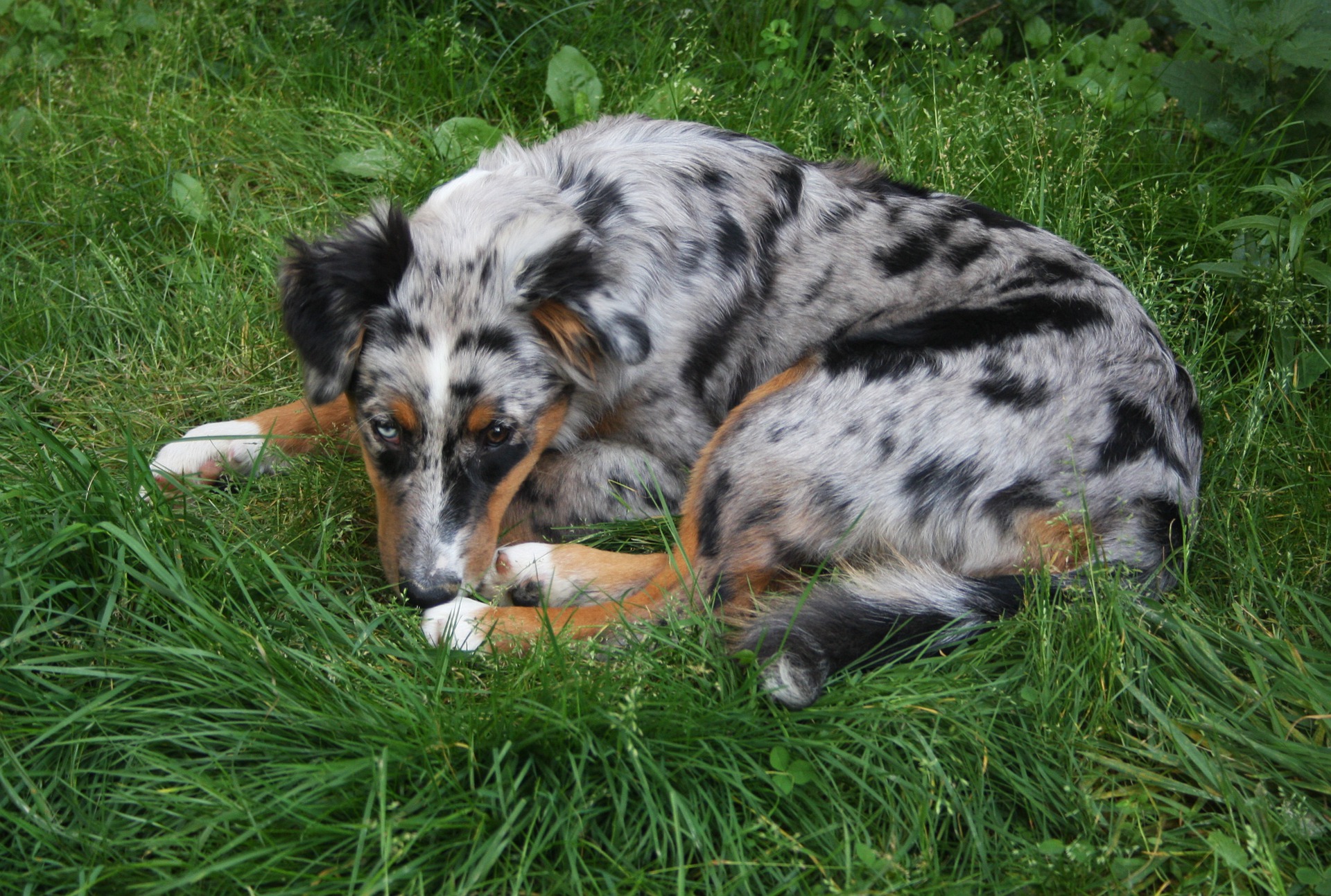 Can I breed a Blue Merle with a Red Merle? Is double merle breeding allowed?

No, breeding a double merle is not a good idea. As mentioned above the Merle gene is actually a gene mutation that can cause serious health problems for dogs. Now, when two merle-coated dogs get together, the chance that these health problems occur goes up. When you breed two Merle dogs, in this case, a Red Merle and a Blue Merle, there is a good chance that some of the puppies will turn out to be “double merles” also known as “lethal whites.” It sounds scary, we know.

But, basically, what happens there is that the puppies are born with coats that have very little to no color to them, they are born with completely white coats, which attracts a wide range of illnesses like skin cancer, deafness, and blindness.

With that being said, there are breeders that don‘t care about the health of the puppies and simply want to have a merle litter, so they will turn to double merle breeding.

What is the difference between Red Tri and Red Merle Australian Shepherd?

We have already covered what the Red Merle Aussielooks look like. Now, for the Red Tri variant, those dogs have white patterns on their face, chest, legs, and belly. In addition, they have copper accents that are often only visible on the face and the legs. Basically, the Red Tricolor consists of three solid colors: red (or “liver”), white, and copper or golden.

Can you breed a Merle with a Black Tri?

What is a Harlequin Aussie?

How do I know if my dog has the Merle gene?

According to Paw Print Genetics “The M Locus (Merle) coat color test reliably determines if a dog carries the M (merle insertion variant) Allele of the PMEL gene. If present, this test will also determine the approximate size (+/- 1 base pair) of the M allele(s).”

What is a Ghost Merle?

Cryptic merle, Ghost merle, or Phantom merle are all terms to describe merle dogs that don‘t display the merle pattern. Here‘s what the Veterinary Genetics Laboratory says about Ghost merles:

“Dogs with cryptic merle (also called phantom or ghost merle) typically display little to no merle pattern and some may be misclassified as non-merles.”

It is also essential to add that Ghost merles are very rare!

How do you know if your puppy is Merle?

Simply looking at your dog will give you the answer to this question. According to Wikipedia, the Merle gene causes uneven spots of color in a solid or piebald coat, as well as blue or odd-colored eyes and skin pigmentation. A Merle coat will have two primary sorts of colored patches: liver (Red Merle) and black (Blue Merle).

What does Merle mean in dogs?

We have already answered this question, but let‘s summarise it now more time. Merle, sometimes known as Dapple in certain breeds such as Dachshunds, is a characteristic color pattern, not coat color, used to characterize the coat of some dogs. Merle dogs may be any color, but the pattern is often a burst of deeper tones marbled against a lighter background.

Sadly, dogs with a Merle coat pattern tend to be much sicker and have more health problems than other dogs of the same breed.

The Merle coat pattern, particularly if it is a double-merle, has been linked to various health problems and concerns. Concerns with the eyes and vision problems include:

Deafness is a further complication that might result from having a merle or double-merle coat pattern. This could occur if the majority of the hair on the head of your Merle puppy is white.

In addition to this, merle dogs can have bright blue eyes and pale skin, and white coats, which make them more susceptible to the effects of sunshine. Because of this, they are at an increased risk of developing cancer, sunburn, or harm to their eyes or skin.

In addition to this, many different dog breeds that have the potential to contain the Merle gene are predisposed to a wide range of other health problems. Conditions such as hip dysplasia, elbow dysplasia, drug sensitivity, cataracts, and many more.

Studies on deafness in Merles

One study by G.M. Strain, L.A. Clark, J.M. Wahl, A.E. Turner, and K.E. Murphy shows that dogs homozygous for the merle allele were significantly more likely to be deaf than heterozygotes.

As you can see they have proven that dogs that carry the piebald or merle gene tend to have more hearing problems or even experience deafness. This is a piece of important information to keep in mind before getting any breed with a Merle coat pattern.

It’s possible that Merle dogs cost more than solid-colored canines. Everything depends on how uncommon the Merlepattern is, the reputation of the breeder you are buying from, and the region in which you live. However, the price of a Merle dog will almost always be more than that of a solid-colored dog.

The explanation for this is straightforward: there is a significant amount of buyer interest in Merle dogs. The stronger the demand for a certain coat color or pattern, the higher the price of the pups with that exact coat will be.