The Fila Brasileiro (Brazilian Mastiff, Brazilian Bloodhound, Cao de Brasil, Cao de Fila) is an incredibly rare and large purebred dog breed whose roots go back to Brazil. He is distinguished by its unusual look with thick, loose skin, powerful jaws, and an odd topline shape along its back. These dogs were bred as security dogs, cattle herders, and to track, chase, catch, and hold large game on Brazilian ranches and rural areas.

The Fila Brasileiro is brave, determined, and self-assured, but gentle and dedicated to their human family, including kids. A Fila wants to be just where you are, and if it loses sight of you, it will go looking for you. Indeed, the breed gave rise to the Brazilian proverb “Faithful as a Fila.”

Male Fila Brasileiros often weigh between 110 and 180 pounds and stand 25 to 30 inches tall. A little smaller than their male counterparts, female Brazilian Mastiffs stand between 23 and 27 inches in height at the shoulder and weigh between 90 and 110 pounds.

The Fila Brasileiro requires strict, seasoned training and lots of space to run around, so it’s probably not the greatest choice for inexperienced pet parents or individuals who live in apartments. Numerous nations that view these canines as aggressive have banned the breed. The Fila Brasileiro, however, may make a wonderful companion and watchdog for an experienced large dog owner who is prepared to invest significant time in training and socializing. 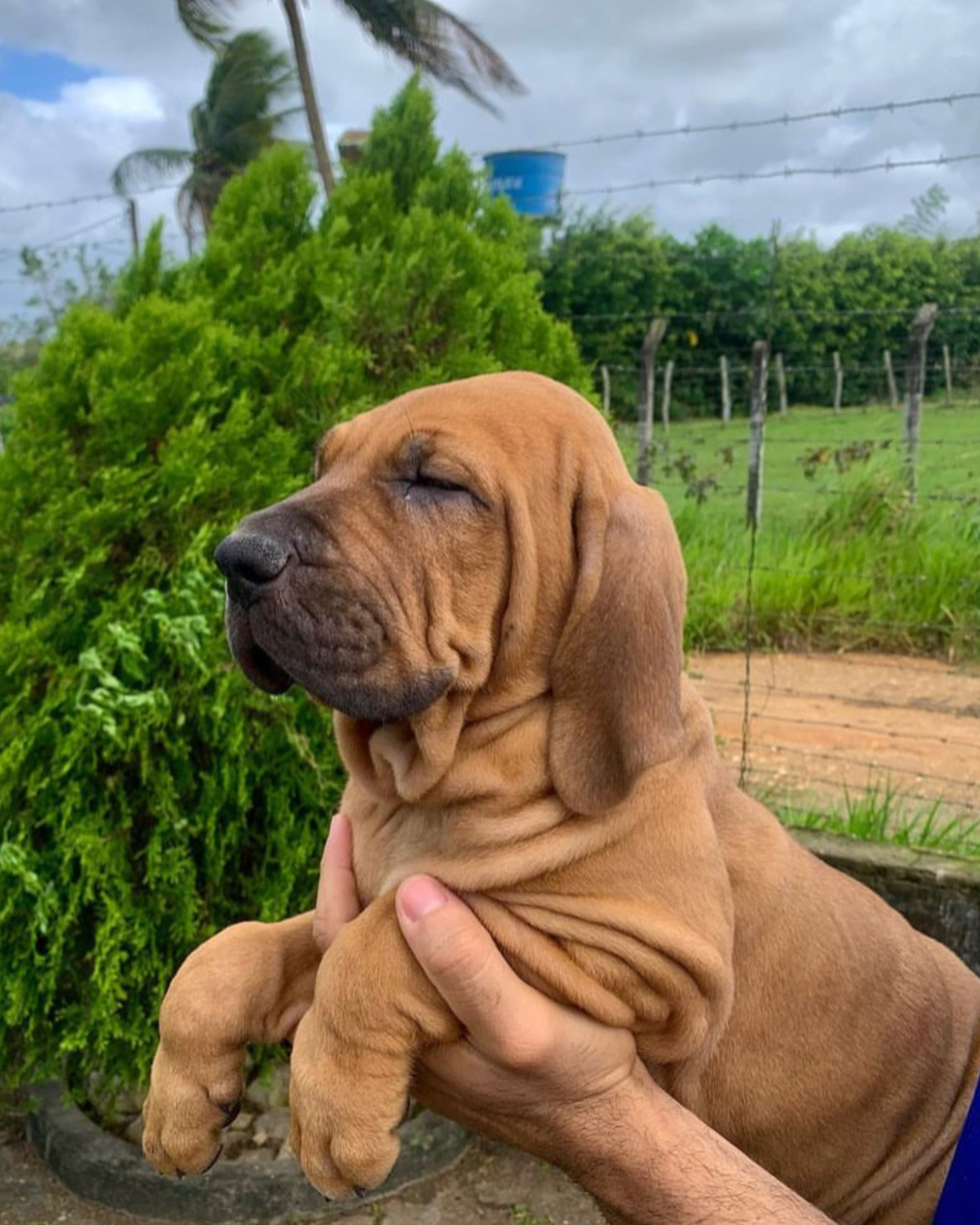 History of the Fila Brasileiro

The Fila Brasileiro’s exact history, including when the breed first appeared, is not fully known. The Brazilian Mastiff is thought to have originated from a crossbreeding of English Mastiffs, Bulldogs, and Bloodhounds in the 1600s based on appearance.

We do know that the Fila Brasileiro originated in Brazil many years ago. The breed was coveted as a guardian of property because of its discriminating protectiveness. It was able to herd, pursue, and take down enormous prey like jaguars thanks to its power and bravery. Filar means “to seize” in Portuguese, and that is exactly what these dogs would do: grasp the animal by the neck and keep it motionless until the hunter could catch up.

These guard dogs are agile despite their enormous size. The Fila Brasileiro could pursue humans who owned plantations at speeds of up to 35 mph and then switch to a subdued, gentle mode when spending time with the family.

The first Fila Brasileiro breed standards were published in 1946, a century after they were created. Sao Paulo residents were given responsibility for maintaining breeding data. The breed was recognized by the Brasil Kennel Club (BKC) in 1954, and the Fédération Cynologique Internationale followed suit in 1960. (FCI). However, the American Kennel Club (AKC) didn’t recognize this breed to this day.

These dogs aren’t for beginners. As big as their bodies are, their personalities are even bigger. They need an owner who knows what he is doing and knows how to introduce himself as a pack leader.

Only a select few people are actually capable of handling the Fila Brasileiro, one of the biggest and most independent purebred dogs around. In order to raise a Fila Brasileiro who won’t become aggressive around guests or strangers, it is essential to consistently socialize puppies from an early age. This is because the Brazilian Mastiff was bred to be devoted only to its owners.

However, this giant dog breed is nothing but dedicated when it has a strong, reliable human pack leader. The Fila Brasileiro frequently rests close to their folks in silence and composure while they aren’t moving around or working. However, the Fila is fast to react and can switch from relaxing to lunging in a matter of seconds if something captures their attention or aggravates them. Again, this is the reason it is crucial that this breed has a seasoned and reliable trainer.

The Fila Brasileiro has a surprising amount of activity for such a huge dog. The enormous dog needs roomy areas, such as fenced-in yards, to gallop around and let off some steam. Even the most active and dog-savvy city dwellers find the Fila Brasileiro uncomfortable in cramped quarters like apartments or condos.

Are they good family pets?

Despite the Fila Brasileiro’s potential for aggression, the large breed may be a superb family pet with constant training. To avoid any unintended damage, it’s crucial to establish boundaries and instruct your children how to properly interact with your Fila Brasileiro.

However, if you have smaller kids, this definitely isn’t the breed for you. These are strong dogs that could easily knock over toddlers.

This dog is naturally reserved among strangers but is fiercely devoted to its owners and their possessions. Because of their tremendous prey drive, Filas shouldn’t be trusted around cats or small dogs. If raised together, they may be able to live in harmony with other family dogs, but adding a new dog after Fila has been a member of the household is not recommended.

The Fila requires a handler who can govern with authority and constancy because it is a strong-willed and powerful creature. Although incredibly clever and adept at picking up difficult skills, Fila Brasileiros may also be obstinate and challenging to train. The first basic obedience training sessions should start when the puppies are around eight weeks old.

The right training techniques must be applied. A Fila cannot be forced to perform any action. Positive, incentive-based training can be effective, but to keep your Fila’s interest, keep sessions brief and avoid using excessive repetition.

Given the breed’s obvious aversion to strangers, early and thorough socialization is essential to prevent breeding a dog that is hostile to strangers. Even with consistent socializing from a young age, the Fila is rarely content to just sit back and watch people come and go. This breed requires a leader that can be a stern but fair boss and has previous experience with guardian breeds. But in the right hands, the Fila is an incredibly loyal and courageous guardian.

The Fila Brasileiro’s coat may be brindle, fawn, or black in accordance with FCI guidelines. A Fila can also have a black mask. Although white marks don’t meet breed standards, they won’t lessen your Fila’s tenacity or loyalty.

The short, smooth, and low-maintenance coat of the Fila Brasileiro won’t frustrate you too much when it comes to grooming. Their silky coat sheds all year long. So if you are allergic, rather go for a Doodle. Your Fila Brasleiro’s coat should remain in good condition with a thorough weekly brushing and regular bathing.

Like owners of other breeds, those of this breed should be reminded to frequently brush their dog’s teeth, trim their nails, and check their ears for any buildup of gunk. Given that many dogs are prone to dental problems, you should brush their teeth every day.

Although Filas may survive in warmer climates, it is not advisable to leave this large dog outside in extremely hot or cold conditions.

Feeding & Nutrition of the Fila Brasileiro

The dietary requirements of the Fila Brasileiro will change from puppyhood to adulthood and will continue to evolve into their senior years, just like those of all dogs. There is far too much variation among individual dogs, including weight, energy level, and health, to make a specific recommendation regarding your Fila Brasileiro’s diet.

Since they can weigh more than 100 pounds, Filas consume a lot of food. Your Fila will require more food the more active it is. But you should never overfeed them as they are prone to gaining weight. Being overweight strains the body and joints, which increases the risk of conditions like hip and elbow dysplasia as well as other diseases like diabetes.

Feed measured meals to prevent gaining weight. Given that this breed is prone to bloat, it’s crucial to feed your dog in smaller portions multiple times during the day (at least twice) to keep him from devouring too much food too soon. Your best bet would be to ask your vet about the specific diet you should feed your dog.

The Fila Brasileiro is a large dog with high exercise requirements. Giving these powerful, athletic dogs at least an hour of exercise each day is optimal for their health. Due to their high energy levels, Filas require both mental and physical activity to be happy. They make great farm and working dogs and like having a task to do.

It’s ideal to take this breed for lengthy runs and walks in rural locations. Dog parks aren’t the best choice for them, as they don’t do too well around strangers. Additionally, Filas enjoy chasing toys, solving puzzles with prizes, and engaging in mind-bending activities with their owners.

Make sure your dog receives at least two to three healthy walks lasting between 30 minutes and an hour each day, along with some enjoyable, active playtime and shorter walks. You simply cannot own a dog of this type without a yard. When the weather allows, you should schedule some vigorous outdoor play sessions with your Fila. 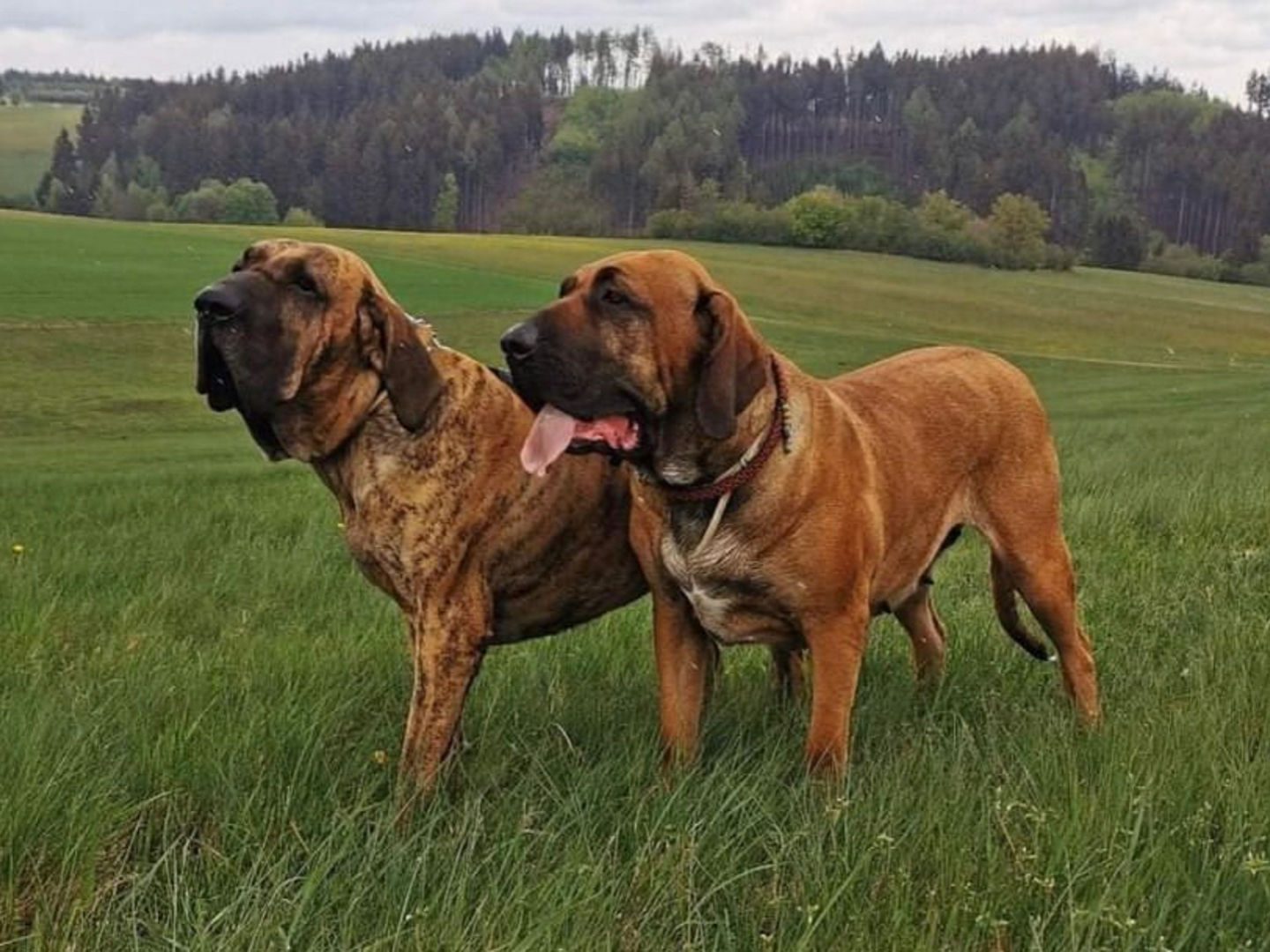 The Fila Brasileiro is susceptible to some genetically inherited health problems, like the majority of purebred dogs. To avoid passing issues down to puppies, reputable breeders screen their adult dogs before breeding. That’s why you should only buy from reliable breeds, and not from puppy mills or backyard breeders.

The most common health problems these dogs face are:

1. Elbow and hip dysplasia. As your dog ages, its joints might develop a deformity that results in dysplasia. This issue, which is common in large breeds, may necessitate surgery in extreme circumstances to improve your dog’s quality of life.
2. Entropion. This is an eye condition that is characterized by inward-rolling eyelids that rub against the eye.
3. Bloating or gastric dilatation-volvulus (GDV). The Fila is prone to bloat, just like other big, deep-chested dogs. A buildup of gases in the stomach causes it to twist, which is a dangerous condition that can be fatal.

Like all dogs, your Fila Brasileiro should receive regular veterinary exams in order to catch any health issues early. Only in that way can your dog live a long and healthy life.

Conclusion: Is the Fila Brasileiro the right dog for me?

Even though the Fila Brasileiro is a stunning dog, the won’t make it to the show ring in most parts of the world. In fact, the breeding of this canine is banned in the United States and United Kingdom. So if you want to call one of these dogs your own, it won’t be easy.

An adult Fila requires a lot of space, much exercise, and an owner who has great success in dog training. If you are a first-time dog owner, getting this powerful dog definitely isn’t a good idea. This giant breed with its strong intensity is only the appropriate choice for people who know how to take care of large, mastiff breed dogs.

But if you are someone who could take care of the special needs of a Fila, then these canines could make amazing family guard dogs. They are smart, loyal, and devoted to their owners. However, don’t underestimate how much training, patience, and skill this dog breed will require.