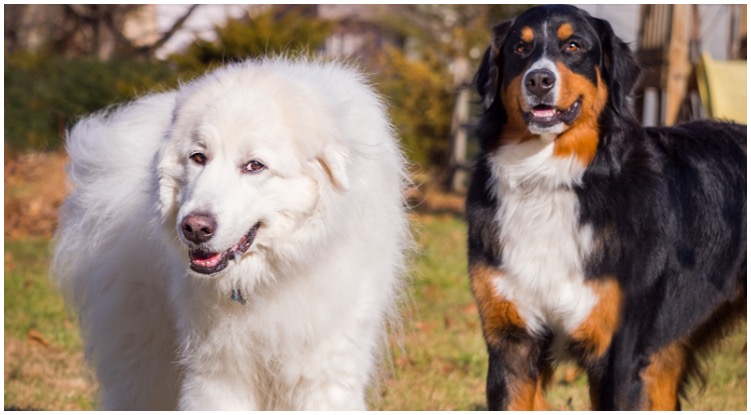 Gentle giants! That’s how we would describe both, the Bernese Mountain dog and the Great Pyrenees. Both were originally guarding sheep in the Alpine mountains but evolved into being incredibly loving family dogs. But what about their crossbreed? Will it be equally as amazing? To learn more about the Great Pyrenees Bernese Mountain Dog mix, we have to take a closer look at the parent breeds.

Berners’ origins are from the mountainous regions of Switzerland. These dogs herd cattle and protect them from predators, but they have also worked hard. Berners are known worldwide due to their ability to pull many time their weight.

Berners played a crucial role in the two most important Switzerland’s products: cheese and chocolate.

The Great Pyrenees was brought to the US by General Lafayette in 1824. But, the breed was not recognized by the AKC until over 100 years later in 1933.

We can’t really say when the first cross of these two breeds was produced. As these two dogs were primarily used as guard dogs in the Alpine mountains, it is possible that their hybrid dog reaches far back into history. However, most of that is still nothing more than speculations.

Personality of the Bernese Mountain dog

Berners are gentle giants of the dogs’ world. They are affectionate, tolerant, calm, and intelligent. Typical Bernese Mountain Dog is protective, but not aggressive. Berners can be shy and reserved around strangers, other dogs, and animals. Therefore, it’s important to work on early socialization and introduce your puppy to new people, dogs, and animals.

Personality of the Great Pyrenees

This breed is very calm and gentle, despite being big in size. You could call them too gentle giants! This dog will amaze you by how loyal and devoted they are to their humans. Trust us when we say, you will have a best friend in this dog.

Besides this, they are highly intelligent and they are independent thinkers who love figuring things out by themselves. Although, they are as stubborn as they are smart. Which could potentially be a problem for some people.

Just like the parent breeds, this hybrid dog will be a gentle giant as well. They are loving, affectionate, devoted, but still protective over their family. Similarly to both breeds, this is going to be a smart dog that’s easy to train. However, you will have to start the training and socialization process early on.

And don’t forget that he needs a lot of exercise and mental stimulation as well. When these dogs feel bored, they will fall into their destructive behaviors and become anxious.

Appearance of the Bernese Mountain dog

Bernese Mountain Dog has a thick double coat. The outer coat is long and dense, while the undercoat is wooly. The coat typically comes in tricolor (jet-black, white, and rust).

Appearance of the Great Pyrenees

The Great Pyrenees is a very large breed, you could even say they are real giants! The male dogs are between 27 and 32 inches tall, while the females are from 25 to 29 inches tall. When it comes to their weight, the males can weigh between 100 and 160 pounds, and females between 85 and 115 pounds.

They have a thick, fluffy, double coat. It’s mostly straight and medium long. Their coat is mostly white, but it can also have patches of grey or brown, especially around the ears.

When it comes to their coat, it’s going to a medium long, straight to wavy double coat. Their crossbreed can inherit any color combination from either one of his parent breed. Or it can also be a mix from both sides.

Health of the Bernese Mountain Dog

Bernese Mountain Dog is a strong and healthy dog. However, due to irresponsible breeding, Berners have a higher risk of developing these health issues:

Health of the Great Pyrenees

The Great Pyrenees is a healthy and sturdy dog. These dogs generally don’t have many health issues during their life. However, we do need to state that, just with any other dog, there are a few illnesses that might come up. But this doesn’t mean that your dog will get any of these. It’s just important that you’re aware of them.

Like you can already tell, their health concerns are pretty similar. Larger dog breeds are often prone to health conditions concerning the bones and joints of their body, and this crossbreed is no exception. Luckily, in most cases mixed breeds are healthier than their purebred parents.

But there are still come diseases that the Great Bernese is prone to. The most common ones are: 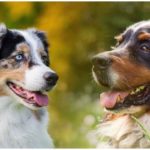 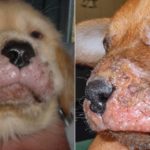