If you are looking for a new family dog that is going to fill your life with love, laughter, and amazing memories, then you can’t go wrong with a Maltipoo. This mixed breed is so popular for a reason. They are intelligent, happy-go-lucky pups, and their compact size makes them a great choice for people living in smaller places. However, if you aren’t that familiar with this crossbreed, you might be wondering how big will Maltipoos get?

Many future owners worry about how big do Maltipoo puppies get. This is an important factor for many living in city apartments, so it’s not weird if you want to inform yourself about their growth patterns. But it’s not always that black and white with dogs, especially not for mixed breeds. There often aren’t breed standards available to give you a general idea, and all you have to go off is the size of the parent breeds. While they are most commonly a small breed, some variations are still possible. To get a better understanding, let’s take a closer look at what affects the size of the dog you are interested in buying.

Are Maltipoos small or medium?

Typically, Maltipoos are categorized as small dogs. Due to the Maltese dog and Mini or Toy Poodle parents, larger Maltipoos are classified as medium-sized breeds but still fall on the smaller end of the range.  So theoretically speaking, Maltipoos could also be medium-sized dogs. But either way, most Maltipoo dogs have a compact size that makes them a great option for people living in apartments.

How big your Maltipoo puppy will grow depends on different factors. We will talk more about that later, however, for the most part, you should end up with a dog that isn’t bigger than 20 pounds. That means that even a medium Maltipoo still fits wherever you need him to.

How can I tell how big my Maltipoo will get?

The best indicator of the future size of your Maltipoo puppy is his genetic makeup. If your Maltipoo is an F1 generation puppy, meaning that one of his parents is a Poodle, and the other one a Maltese, you should pay the most attention to the size of his Poodle parent. The Poodle dog breed comes in three sizes: Toy Poodle, Miniature Poodle, and Standard Poodle. Most Maltese dogs are similar in size, so the adult weight and size of your Doodle mix depend mostly on his Poodle parent.

The Maltipoo is most commonly a cross between a Miniature Poodle and a Maltese dog, which means that he will end up being a smaller canine himself. If the size of the parent Poodle is bigger, the Maltipoo could end up a bit bigger as well. But there are also Teacup Maltipoos available that was produced by combining the Poodle Toy breed with smaller Maltese dogs.

At what age do Maltipoos reach full size?

When do maltipoo stop growing? There are different factors that play a role in when your dog will stop growing. First of all, what type of Maltipoo he is. We already explained that there are also medium-sized Maltipoos, so they will need a bit longer to reach their full size. When they are 9 to 11 months old, Toy or Teacup Maltipoos reach their adult weight and size. Around 11 to 13 months of age, the growth of Miniature and Medium Maltipoos is complete. The reason behind that is pretty simple, the medium Maltipoo needs a bit extra time to grow those few extra inches.

The second thing that is equally important is what Maltipoo generation your puppy is. You can expect him to be fully developed at 8 to 10 months and to measure between 8 and 14 inches tall if your dog is a first-generation Maltipoo, meaning the parents were a miniature or toy Poodle and a Maltese. A Maltipoo who is of the second generation, meaning that both his mother and father are Maltipoos, may continue to grow until he is at least 15 months old.

At what age do Maltipoos reach maturity?

Now a dog doesn’t reach his complete maturity the moment he stops growing. If you are a fan of the ‘puppy phase’, then you are in for a treat. A Maltipoo may develop emotionally and behaviorally quickly, but for the majority of his life, he will keep his adorable puppy-like characteristics. One of the things that makes these dogs so unique is that they will keep acting like puppies (in a good way) for most of their lives. But if you are wondering at what age your dog will reach his sexual maturity, and when he would be ready to produce offspring, then the answer is at about 11 to 12 months.

The Maltipoo grows rather quickly, much like the majority of small and toy breeds. After six years, the aging process significantly slows down. However, this is not unique to Maltipoos as adult aging slows down in many tiny breeds, which is why they live such long lives. Especially in contrast to dogs of a larger breed. Remember that this specific dog doesn’t necessarily mature as it ages; these tiny fellas continue to be playful and act much like puppies until they are quite old. You’re in for a wild journey because in Maltis “old age” is roughly 10 to 15 years.

These adorable Doodles have a weight range of 5 to 25 pounds and a height range of 6 to 14 inches from the withers, which is a dog’s tallest point between the shoulder blades. Since Maltipoos are a small breed of dog, they typically mature before becoming one year old. A typical rule of thumb is that a dog will mature faster if it is smaller.

Any puppy’s typical growth pattern indicates that throughout the first half of their puppyhood, they will grow quickly. Growth will begin to slow down once they are half their size and will eventually plateau in the final few months before they are fully grown. Puppies normally reach their full height at that point, but they still grow some bulk. 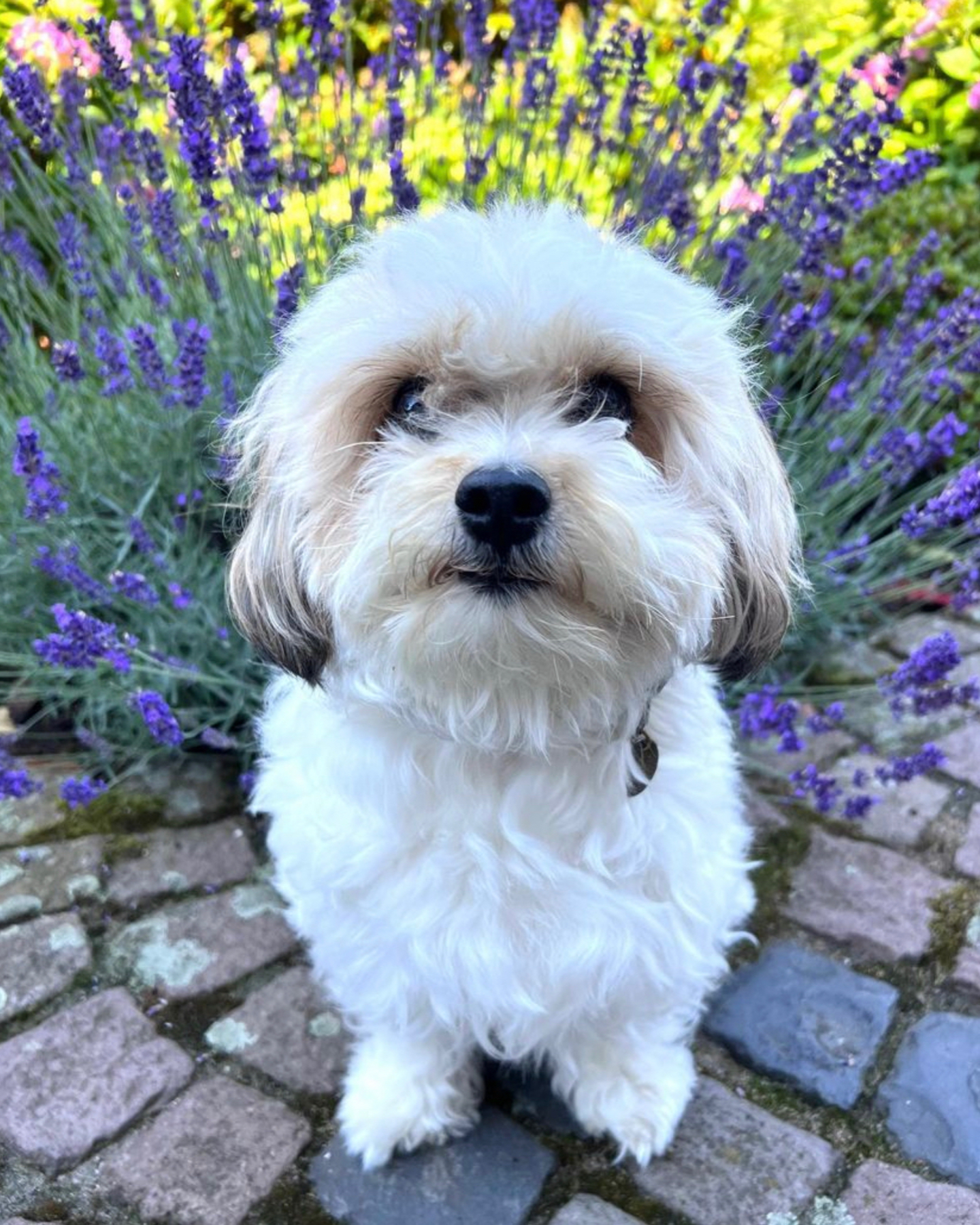 Typically, toy Maltipoos weigh 5 to 10 pounds and measure 6 to 11 inches from the withers. By 3.5 months, Toy Maltipoos typically reach half of their full size, and at 7.5–11 months, they reach their full adult size. To determine a Toy Maltipoo’s expected adult size, you can also multiply their weight at 15 weeks of age by two.

What affects the growth of a Maltipoo?

Besides the parent dog breeds, there are also other things that play a large role in how big your charming Maltipoo puppy will get. And those are nutrition, physical activity, and his overall health. We already explained how important his genetic makeup is, so now we will focus on the other factors.

Nutrition is pretty much a no-brainer, right? Although the quality of your pup’s growth will undoubtedly be influenced by what it eats, its growth won’t necessarily improve or worsen dependent on it. For instance, if your dog eats poorly and gains weight, this can immediately affect its joints and cause other health issues down the road.

Maltipoos may be small, but they still require exercise and plenty of play. Just watch that it doesn’t lose so much energy that it can’t replenish, especially if your pup is still growing. A good general rule of thumb is that your puppy should never shed more calories than it consumes. The size of your Maltipoo dog will also depend on how healthy he or she is as a puppy. In addition to food and exercise, make sure you regularly visit the vet and give your dog the necessary vaccinations and dewormings.

Conclusion: How big will Maltipoos get?

As you can tell by everything that we have said above, how big do Maltipoos get depends on a number of different factors. But the single most important one is the size of his parents. So if you have nothing else to give you a rough idea, just ask your breeder to see the mom and dad of your future puppy. Any reputable breeder should be completely fine with it. And if they aren’t, know that it could be a major red flag.

But as a owner you also play a role in the size of your pup. It’s pretty similar to kids. While most of it depends on genetics, physical activity, and puppy food will be important too. Not as important as the size of parents, but they still play a role. Your growing Maltipoo needs enough protein and exercise to give him the nutrients and activity that his body needs to grow. It would be a good idea to ask your vet about his recommendations for your new puppy. Coming up with the best diet for small dogs could be confusing, especially if you are a firt-time dog owner. So you shouldn’t hesitate to ask a professional.