While most of us are used to seeing curly Goldendoodle, a crossbreed of Golden Retriever and Poodle, with curly hair wrapped around the body, the confusion led by the flat coated Goldendoodle leaves sheer questions to us about their appearance, fur size, and certain characteristics over the most popular curly ones. With the growing popularity of petting Goldendoodle, the matter that comes into the spotlight is which one is better to tame. Curly coat or flat coat Goldendoodle?

To have a better understanding of which one to pick, we will dive deeper to give a quick spot check on both variants, such as why they have the improper coat, how they vary from the curly coated ones, which one is more expensive, and how allergic they are likely to be for humans, etc.

Is it Possible for Goldendoodles to Have Straight Hair?

Any Goldendoodle having straight hair with no furnishing is generally called the flat coat Goldendoodle. They are bred from the Golden Retriever and Poodle, like curly ones, but none of them have their original parent pedigree. Flat-coated hybrids tend to have straight hair just like the short-haired Golden Retriever, but their furs are more onto smaller sizes. Appearance-wise, both curly and flat Goldendoodles vary, and their price is commensurate with that too.

This unusual flat coat, sometimes called improper coat, doesn’t imply that the flat ones have a shortcoming or a flaw in their appearance; it is all about how they shed, how often they shed, how they are allergic to owners, and how furnished they are.

They used to be, but they are no longer curly as suggested earlier; when they were first bred, they used to be curly but nowadays, they vary from curly to wavy and flat. The curly ones look similar to teddy bears with scruffy faces, while the straight ones look more smooth and short-hair type Golden Retrievers with no furnishing.

For those who don’t know what furnishing is – furnishing means when the Goldendoodle has long hair growing over the eyebrows, nose, and mustache. This furnishing hair gives these breeds a teddy look, whereas the flat coated Goldendoodles don’t have the furnishing resulting in their small hair growing into a predetermined length. Their looks are confined to more of the Golden Retriever, so the price drops compared to the curly furnishing ones.

To find out if they always turn out curly or have the possibility to come out as flat, you will need to understand their genetic recombination. 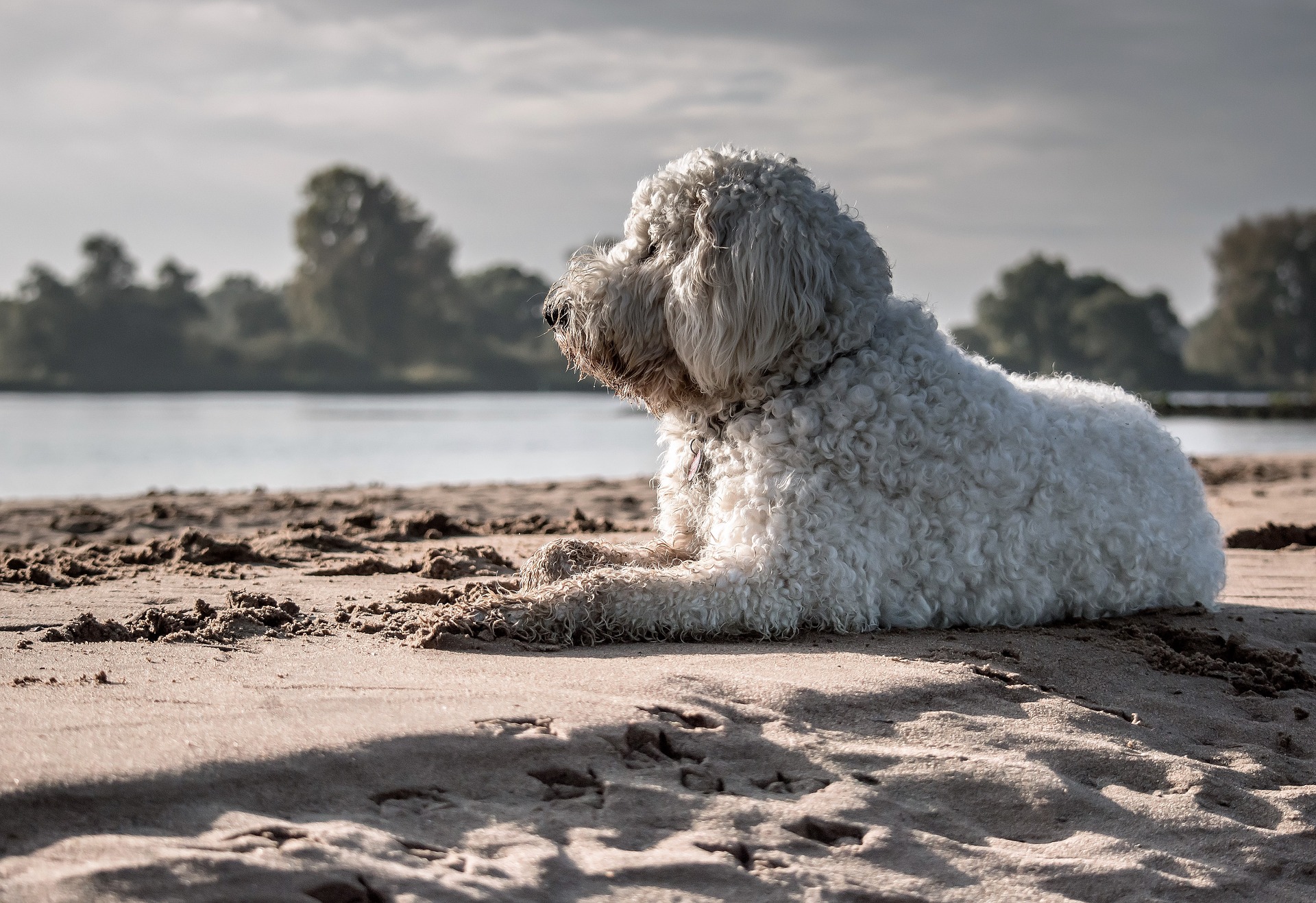 Image by Daniel Brachlow from Pixabay

How Is the Improper Coat Formed in Goldendoodle?

Each parent, while breeding, carries their allele or genes that are unique to its kind. These alleles are passed down to the offspring or litters, making them the breed we see. This genetic makeup will decide whether the dog has yet to have a flat or curly coat while also determining whether or not they contain the furnishing.

The gene responsible for curly is called the KRT71 gene. When the genetic combination is +/+, it refers to the curly pups, whereas the +/- and -/- represent the wavy and straight coated Goldendoodles, respectively. Now the furnishing factor is determined by the gene too. The Poodles comprise two furnishing genes known as (F/F), and the Golden Retrievers carry two improper genes (IC/IC). Remember, the F genes dominate over the recessive genes, IC. Therefore, upon crossing, the offspring will always have the furnishing coats, which denotes that it takes only one F gene for Goldendoodle to turn out flat coated.

When comparing Curly coat vs. Flat coat Goldendoodles, the very thing that comes to mind is whether or not they shed. The answer is – they both shed, but their shedding amount differs. The Flat-coated ones are moderate shedders meaning they shed more than the regular Golden Retriever, whereas the curly ones shed less than the flat-coated breed. However, for the shedding, their characteristic falls more into the Poodle, which happens to shed more on a year-around.

However, the Goldendoodle with straight hair also sees a spike in shedding in springtime, owing to their similarity with Poodle. If you have more queries about flat coat Goldendoodles, You will find a lot more about them in this article to consolidate your understanding.

Apparently, humans are allergic to both of them since they shed their furs, and inhaling any amount of them may trigger an allergic response in humans, especially those prone to rhinitis or histamine. However, straight hair causes more allergies since they are moderate shedders and shed way more than curly ones. In fact, the saliva can be detrimental to your allergic condition if it comes in contact with the human body. If you are a person too serious about your allergic condition, you must move on with the curly Goldendoodles that resemble the Poodles’ coating.

How Do You Groom a Flat Coated Goldendoodle?

Perfect grooming can prevent the shedding of the Goldendoodles if applied aptly; proper grooming comes with healthy diets, brushing techniques, and bathing. With that in mind, the flat coat Goldendoodle requires less grooming as they already shed a lot, and not much is left for grooming, unlike the curly ones that require grooming more often. Therefore, the curly breed asks for hefty splurging of money for grooming. Still, grooming has more advantages than not having it – it eliminates any extra shedding of furs on the floor, which might otherwise be strewn with dander and hairs.

Various types of slicker brushes are available, which are cheaper and easy to use for grooming the dog. You have an assortment of brushes like Big G Slicker or Furminator de-shedding tools to pull out the furs before falling over the floor. In fact, shampoos like Burt’s Bees Shed Control Shampoo will eliminate any excess hair before messing up your precious tiles of the floor. The good thing about Flat coat Goldendoodle is that they need grooming at least once or twice a week, saving enormously on the grooming.

Pet owners have different preferences; their choices are not limited to only furs but also many factors, such as their characteristics, their looks, spending cost, maintenance, resale value, etc. By considering the above discussion, the flat coat has the following cons –

From the points mentioned above, it is safe to say that you may be interested in picking the curly Goldendoodle. However, the breeding campaign led by the breed campaigners may increase the likelihood of more generations of such flat coat Goldendoodles that might no longer be rare, and dog-owned communities will get more used to taming the flat-coated Goldendoodle just like they are with the curly ones.

There is no shame or harm in having improper or flat-coated Goldendoodles. They both are gentle and calm and look cute and adorable. Their furs don’t change their playful and joyous character, which is why people buy them. You can pick any selective fur-typed puppies if the price matches your budget. In fact, you will find a variety of Goldendoodles, which are rare, difficult to breed, and expensive to buy. Check out the blog on the red Goldendoodle, which is a dream dog for many dog lovers.

Don’t forget to let us know your experience with any of the two types of Goldendoodle you have bought recently. Don’t ruin your sleep by comparing the curly coat vs. flat coat Goldendoodles. And don’t forget to snap a beautiful photo with them!!!