The Maltipoo is a result of breeding two purebred dogs, Maltese dogs, and Poodles. This extremely popular crossbreed has a demeanor that’s calm, and kind, and exudes a great deal of charisma! There is no way around the fact that this dog will effortlessly win the affection of everyone he encounters. One look at pictures of full-grown Maltipoos, and it becomes clear why they have been the favorite crossbreed of many Hollywood celebrities like Ellen Degeneres for years.

But, the temperament and personality of a Maltipoo are not the only factors that contribute to the breed’s popularity. In addition to their great demeanor, they have hypoallergenic coats, and they come in a variety of coat colors! Everything is possible when it comes to the Maltipoo’s coat color, whether it be red, apricot, black, or even a multicolored coat.

Because there are so many various colors of coats to pick from, distinguishing between them may be difficult at times. For example, the apricot, red, and brown coat colors look very similar. Even though the color of a Maltipoo’s coat does not have any effect on the dog’s demeanor, it is still beneficial to be aware of the distinctions between all the set colors.

The best way to explain all the differences is by showing you pictures of full-grown Maltipoos and their different coat colors.

The Maltipoo is a designer dog breed, meaning that American Kennel Club does not recognize them as a breed. Because of this, there are no acceptable or non-acceptable coat colors (like it is for its parent breeds). Accordingly, breeders can breed almost any color of coat they choose, there are no limits. 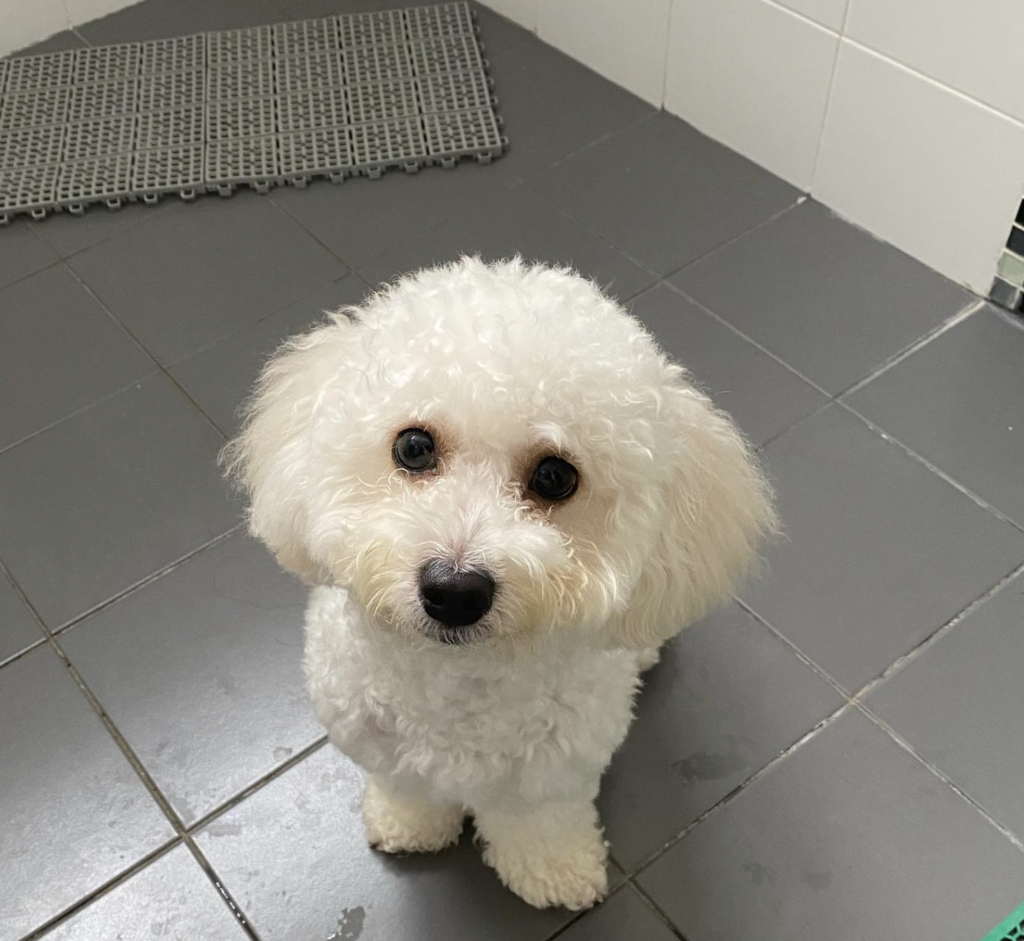 Let’s begin with the most popular coat color for this small adorable doggy, which is white. It should not come as a surprise that white coats are the most common color for the coat of these fluffy dogs. This is because the Maltese and the Poodle, the Maltipoo’s parent breeds, both have white as their standard coat color! The white Maltipoo has black eyes and a black nose, and pinkish skin underneath its coat.

Because the white coat is so light, it also gets dirty easily and can get a yellowish hue to it. It is important to take good care of the white coat and keep grooming and hygiene at a high level. 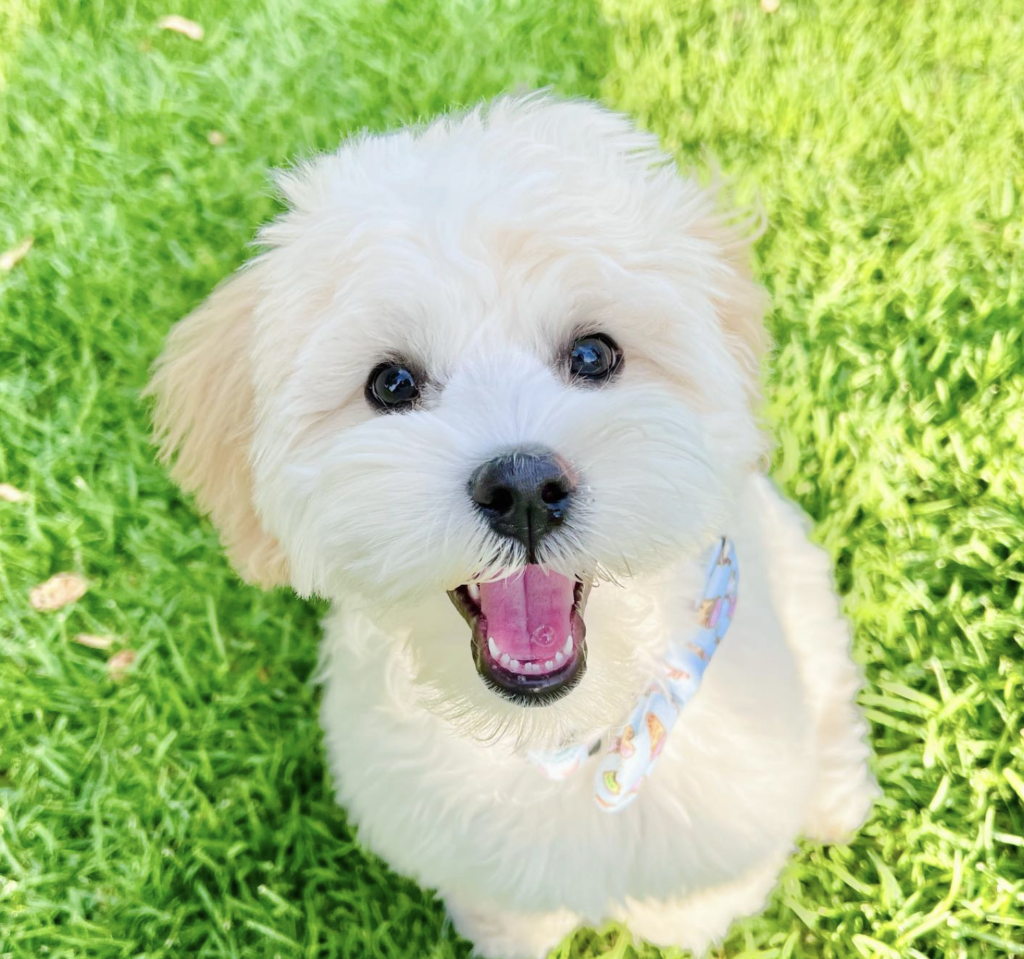 If white is the most common color for the Maltipoo’s coat, then we can confidently state that cream is one of the most popular hues! But what exactly does cream appear to be? The cream-colored Maltipoo has a coat that is a very pale shade of tan. The majority of the time, they have the appearance of being white; nonetheless, it is obvious that they are not really white.

The cream Maltipoo can be distinguished from other Maltipoos by more than just the color of its coat. In fact, this color possesses the widest range of a variety of different physical qualities. For example,  they have brown noses, eyes that are notably lighter, as well as toenails that are lighter in hue. Aside from that, the cream-colored Maltipoo has a pink skin tone underneath their coats. 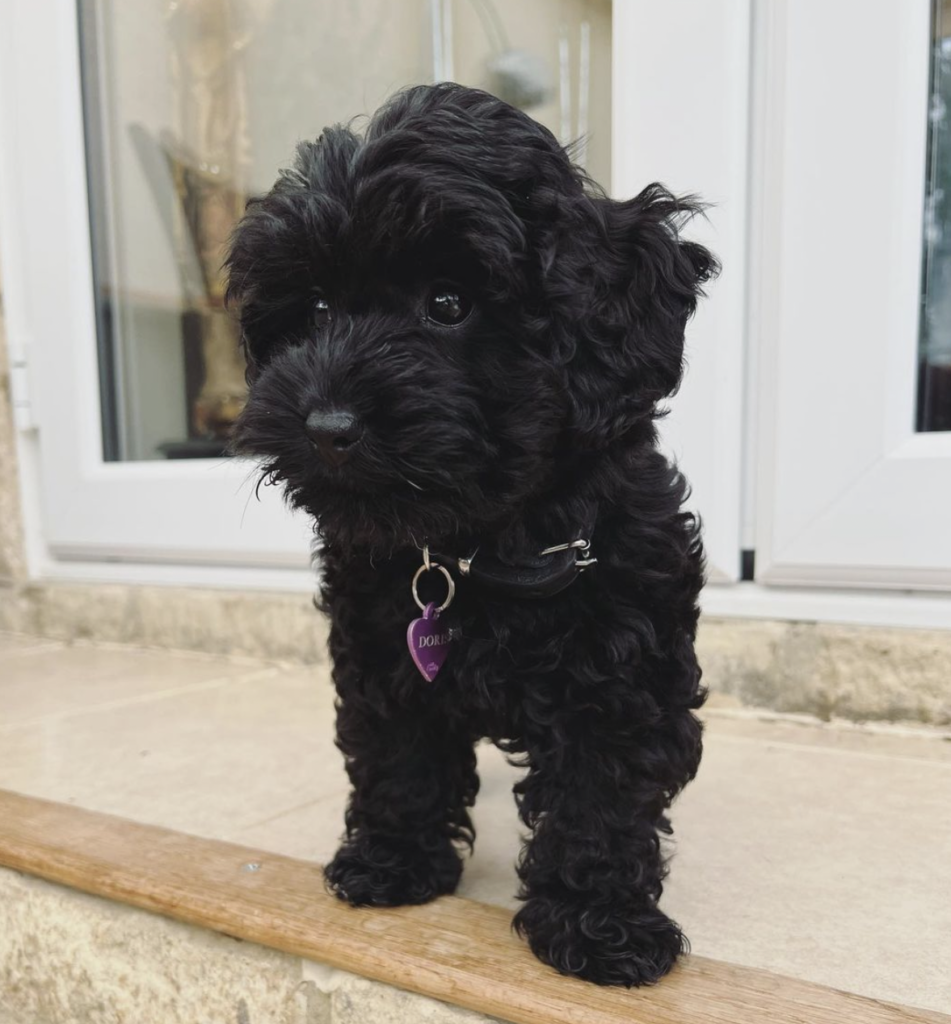 It is extremely uncommon for Maltipoos to have a black coat color. The reason for this is that the gene responsible for the black coat color is a recessive gene, which means that it does not always manifest. The fact that a recessive trait needs to be dominant in order for it to manifest on coat color makes it such that a pure black Maltipoo usually is an extremely rare genetic variation.

Because the black gene is recessive, both parents must have it for their offspring to have it. Maltese and Poodle coats, on the other hand, are most often white, as was already said. So, breeders usually have to combine a black Toy Poodle with a darker-colored Maltese to make a black Maltipoo. 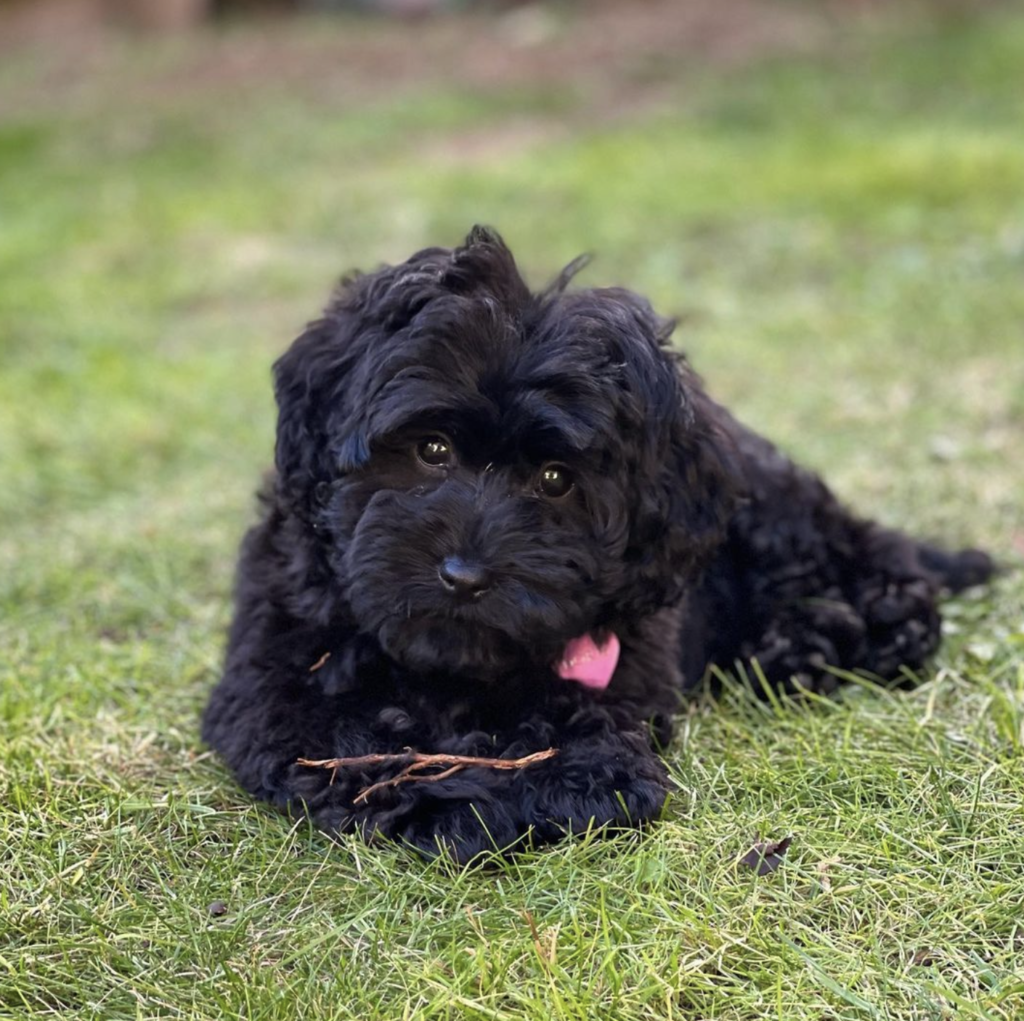 If you’re wondering what a black Maltipoo looks like, they’re almost always all black, from head to toe. Physical characteristics of other Maltipoo colors typically vary, but this is not the case with the black Maltipoo. Their noses, paws, eyes, and ears are all black!

Lastly, it is important to mention that dark coat colors, such as black, fade the fastest. As a result, many black Maltipoosfade into grey and more silver tones as they age.

Due to the fact that they have the appearance of cute little teddy bears, apricot Maltipoos are also among the most popular hues of Maltipoos. Luckily, this is a prevalent coat color in this crossbreed.

If you look closely, you’ll see that apricot Maltipoos almost always have black features scattered throughout their bodies, including the color of their nose, eyes, toenails, and eye rims. Likewise, the apricot Maltipoo is considered to be a multicolored Maltipoo because of the fact that there is virtually always some white color on its coat. It is quite unusual to come across an entirely apricot-colored Maltipoo.

What is also interesting is that the apricot hue of the Maltipoo coat has a tendency to fade or lighten a little bit over time! 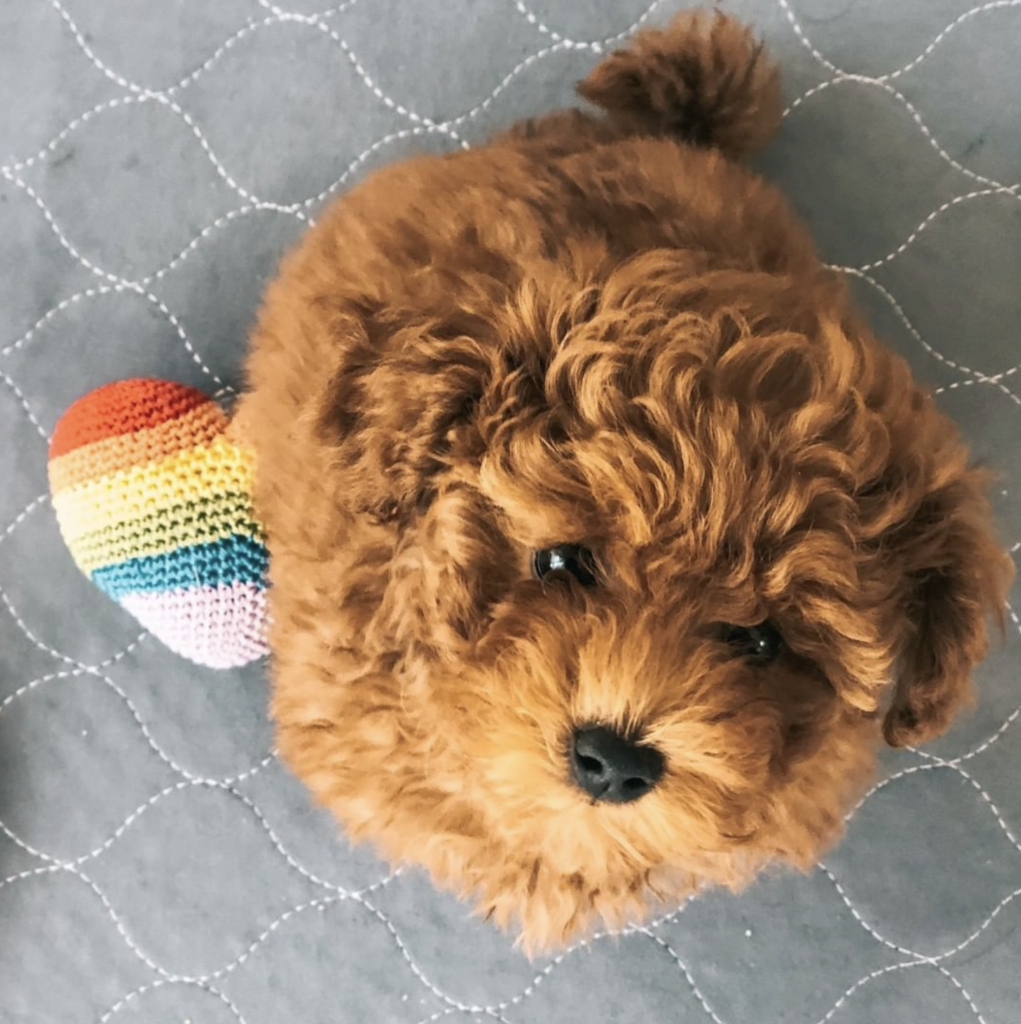 As red Maltipoos become older, the vibrant color of their coats is quite likely to fade a lot. When they are young, they often have a rich, lovely red color, but as they mature, the color shifts to a lighter shade of red. Basically, their red coat might fade into an apricot-colored coat.

Brown Maltipoos are very uncommon, and the coloration of this breed is most likely to appear solely in Parti Maltipoos. The color brown is sometimes referred to as a “dark walnut” hue. This is a shade that neither the Poodle parent nor the Maltese parent often displays. That is the main reason why this coat color is so rare.

Brown Maltipoos that are authentically brown also has a brown nose as opposed to a black one. These dogs also come in a variety of coat patterns, including parti-color and tri-color coats.

One of the rarest coat colors in these companion dogs is grey or silver. Grey Maltipoos are often born black, and their coat lightens with age. Their coat should have cleared completely by the age of two, resulting in a grey Maltipoo coat. Yet, the grey will never be a pure grey tone and will always contain deeper colored areas. Because the grey Maltipoo used to be black, its nose, paws eyes and eye rims remain black as well. 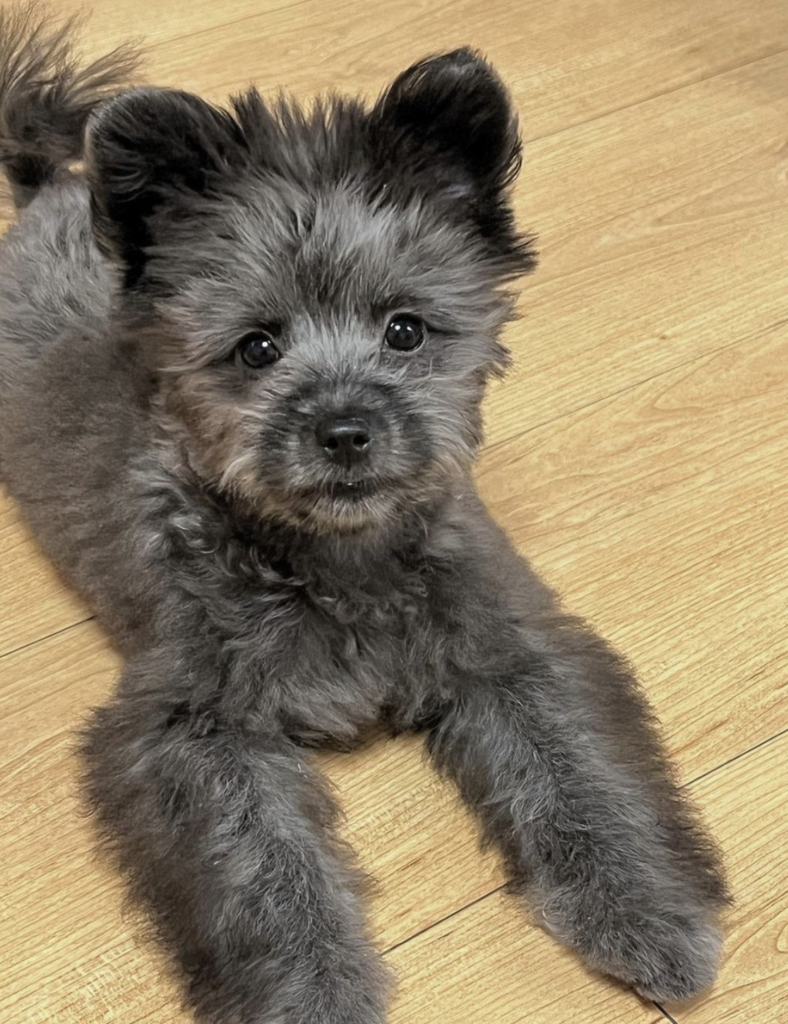 If you own a black Maltipoo and want to know if it will become grey, you’ll have to wait around 6 weeks. It might take up to two months to determine if the black Maltipoo’s coat will clear up and become grey. 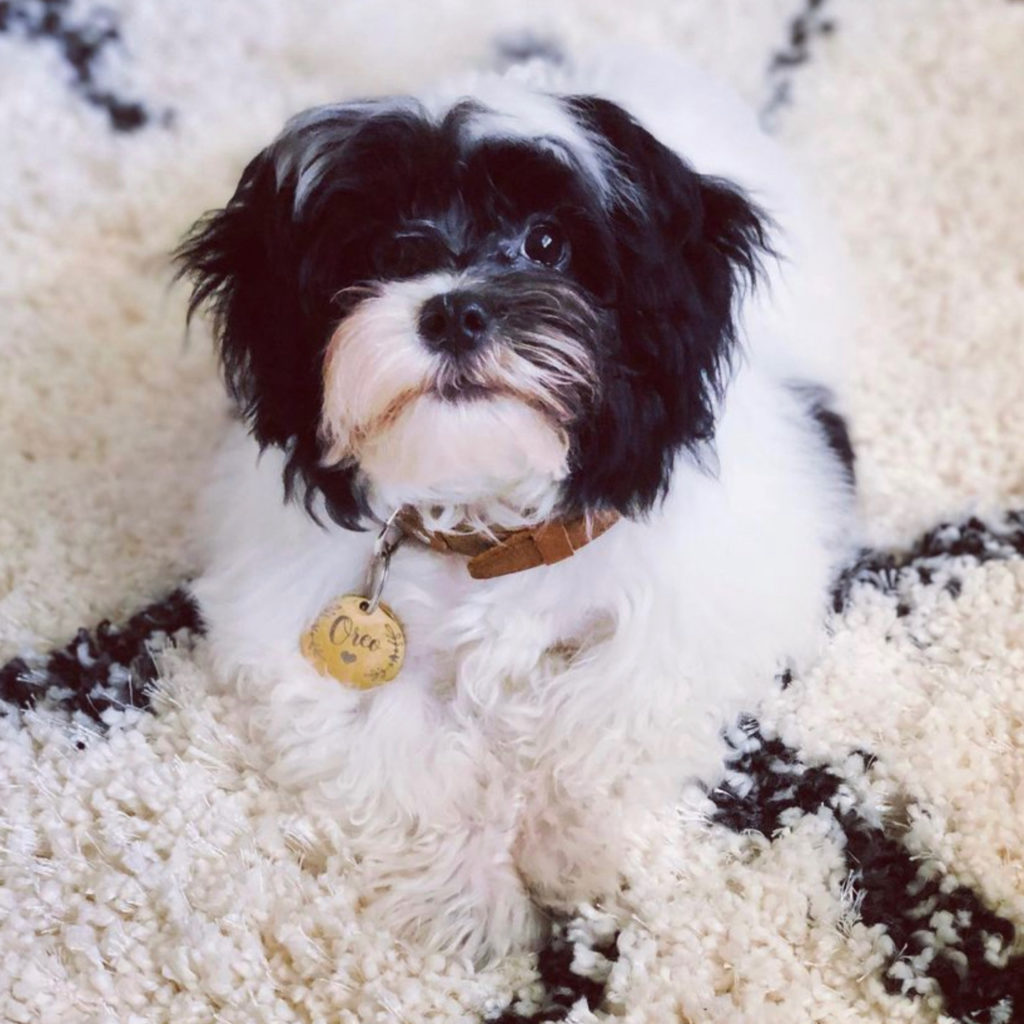 The black and white Maltipoo is distinguished by a number of marked differences, the most common of which are a white chest, a white nose, and a white mark on the crown of its head. 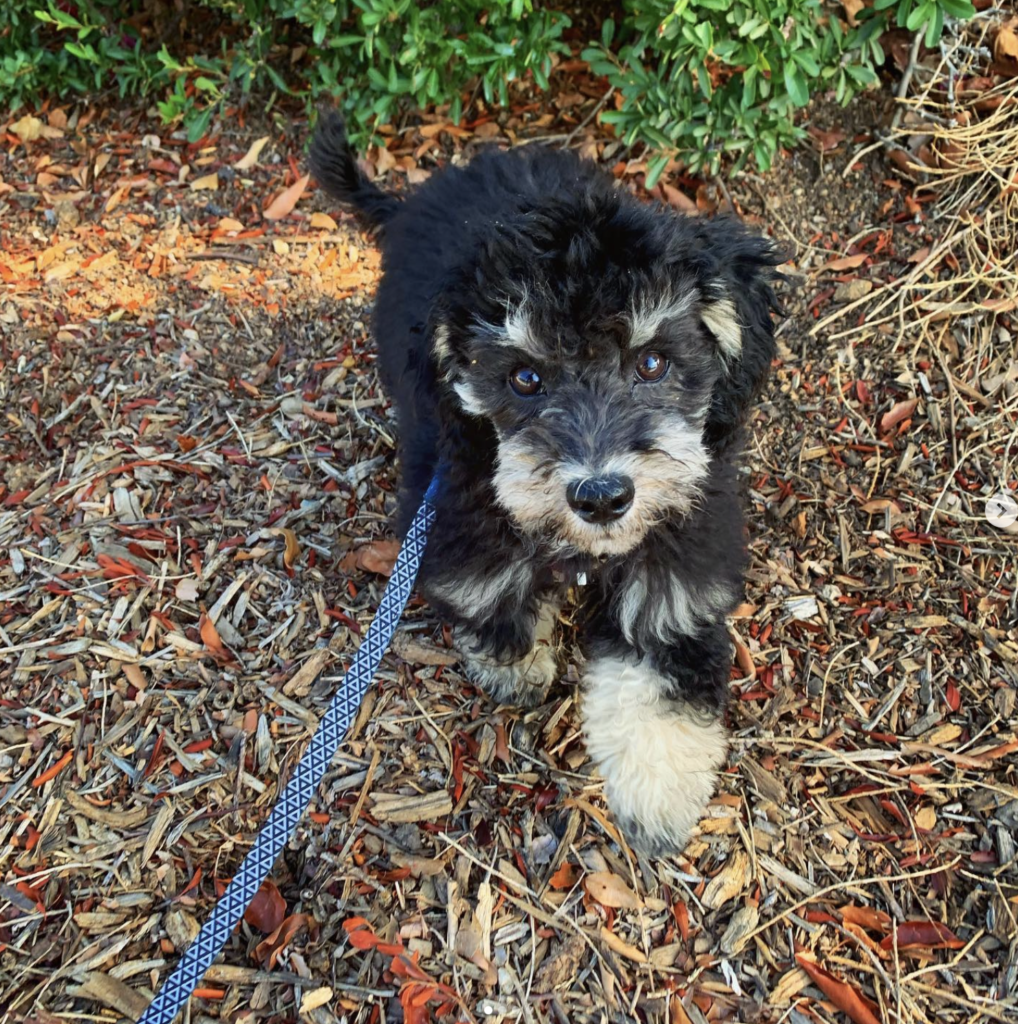 The phantom Maltipoo is probably the rarest coat color to come across in this designer dog. The reason why they are so rare is that the Phantom Maltipoo, as opposed to the Parti Maltipoo, needs to have two colors in its coat in extremely particular positions.

Phantom Maltipoos are required to have one main hue, coat color, that predominates over the bulk of their body. The second color should be seen on the bottom sections of the legs, on the snout of the nose, and around the eyes of the dog.

Keep in mind that the coat color does not affect your dog‘s temperament and demeanor. It is simply a preference and not an indication of what your dog will be like.

After you had a chance to look at Maltipoo pictures full-grown dogs, we would like to add a little reminder. Before settling on a color for your cute Maltipoo. You should bear in mind that your Maltipoo‘s coat will lighten at least a little bit throughout the course of its lifespan.