We can’t hide the fact that we are absolutely crazy about Maltipoo dogs! This crossbreed dog brings us the best of both worlds, the Poodle, and the Maltese. There is a reason why this dog breed is such a popular family dog, and in addition to being smart, affectionate, loyal, and loving, these dogs also amaze us appearance-wise. They come in many different colors, thanks to their Poodle parent, and there is also a variety of sizes available. We have covered a lot of topics regarding the Maltipoo. How big they will get, if they are high maintenance, and what the downsides of owning a Maltipoo are, and what health issues they might face. But in this article, we will talk more about one very special color variation, the black and white Maltipoo.

What is the black and white Maltipoo?

As we have already explained, the Maltipoo breed comes in a lot of different colors. And that is thanks to their Poodle parent. Maltese dogs are known for their silky white coat, however, Poodles come in a variety of different colors. We even have a whole article dedicated to their different hues, “The Colorful World Of Poodles: Which Is The Rarest?”, in case you want to find out more. But long story short, there are two variations of the Poodle coat, solid colors, and particolored Poodles. And no, particolored Poodles aren’t called the way they are because they love to party. Instead, it’s used to describe the pattern of their multiple colored coats. 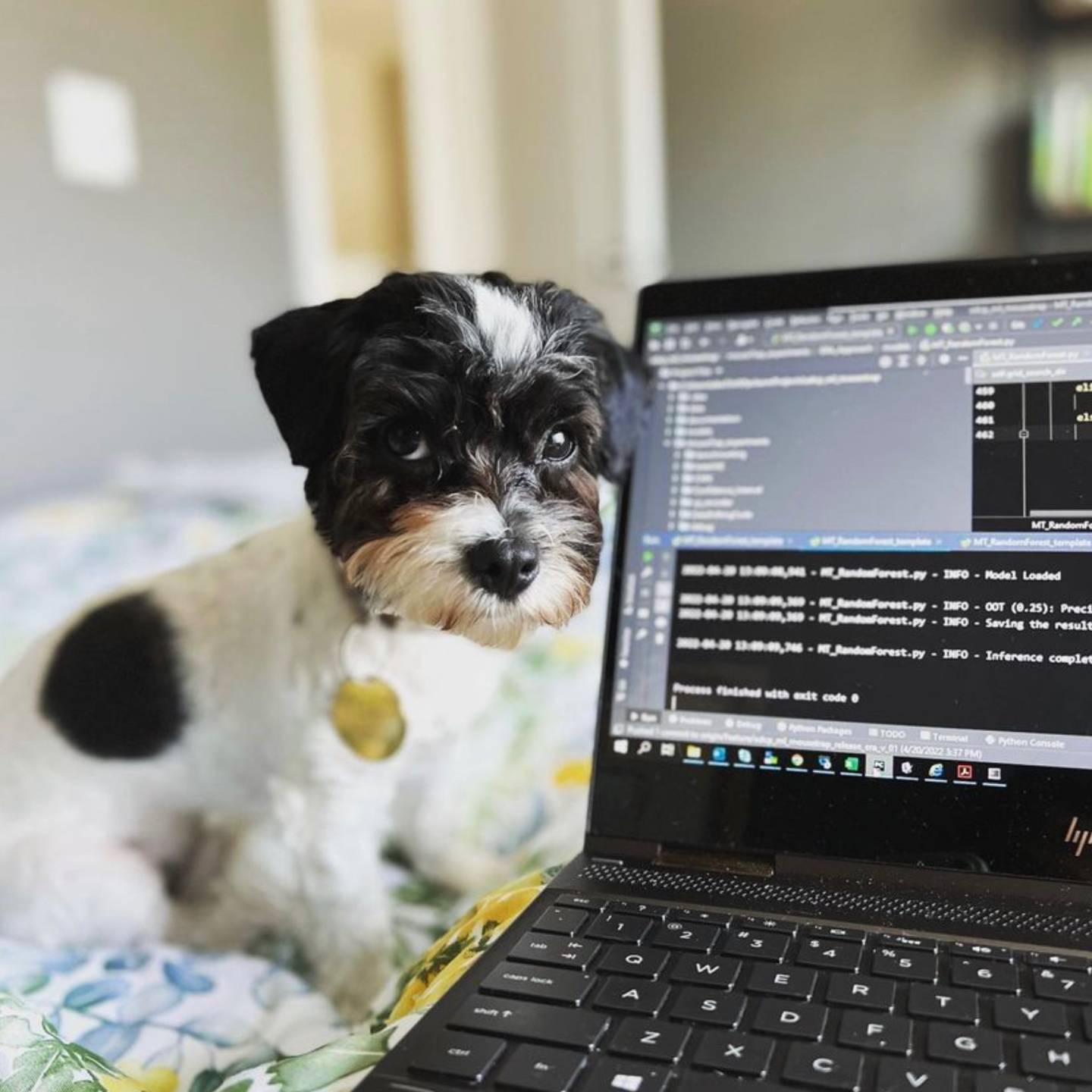 As we have already explained, the parti Maltipoo is a crossbreed. That means that this dog is the product of combining the genes of a Poodle and a Maltese. There are different ways to breed a Maltipoo. Either by crossing a Poodle with a Maltese, by breeding two Maltipoos, or by breeding a Maltipoo with a Poodle or a Maltese. All these ways will produce different generations of Maltipoos, and explaining that could easily get complicated. However, what you have to understand is that most Doodle dogs are bred with the intention to inherit the hypoallergenic coat of their Poodle parent.

While the Maltipoo has a long and silky coat, Poodles have a very curly coat that rarely ever sheds. That’s why these dogs are considered to be hypoallergenic. Basically, they would be the best choice for someone who is sensitive to dog hair. No dog is completely hypoallergenic, because saliva and dandruff can also trigger allergic, but that is a topic for another day. The Maltipoo won’t have the EXACT same coat as their Poodle parent, but it will most likely be a less curly variation of it. But the shedding should still be pretty much nonexistent.

The black and white coat pattern will depend on the Poodle heritage of your parti Maltipoo. Some of the Maltipoo full grown black and white dogs will only have a few black patches on their white coat, while others will be mostly black with a few white spots.

You probably already know that the purebred Poodle comes in three sizes: Standard, miniature, and toy. The Maltese breed only comes in one size, and they usually don’t grow any taller than 12 inches. But how big will the full grown black and white Maltipoo be? Well, again, that will mostly depend on their Poodle parent. The Poodles just come in so many different varieties, which makes them an amazing choice for creating crossbreeds. In most cases, the Maltese is crossed with a miniature or toy Poodle, to create the ideal small and adorable family pet. That makes this breed a great choice even for people living in apartments.

But, as I have already explained, there are three options available. Standard Poodles are taller than 15 inches, miniature Poodles are up to 15 inches tall, while toy Poodles are up to 10 inches tall. That means that Maltipoo dogs can be somewhere around 10 to 14 inches tall, and weigh 5 to 20 pounds. But because most of them are the offspring of miniature or toy Poodles, you will most commonly see Maltipoos that aren’t taller than 12 inches, and don’t weigh more than 15 lbs. To get a better idea about the possible size of your dog, ask your breeder to meet the parents of your puppy. That will at least give you a general idea. 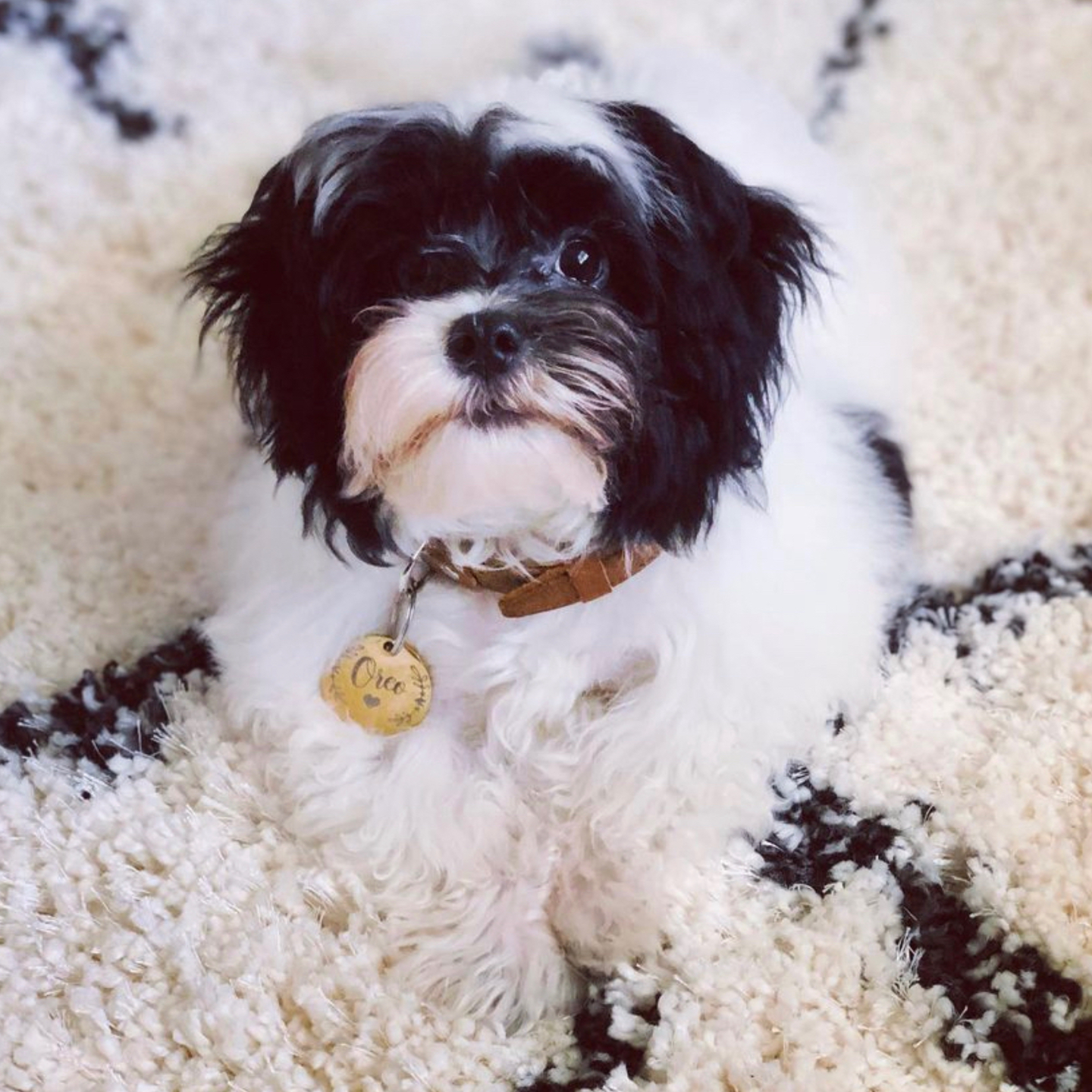 When it comes to personality, color doesn’t really play a role. Many people believed that black dogs are more aggressive than different-colored canines. However, it was soon proven to be fake, and we now know that coat colors don‘t affect the personality of dogs. Therefore, your Maltipoo will have the same bubbly and loving personality as any other representative of this breed. But don’t let their adorable faces trick you into thinking that these teddy bear dogs aren’t highly intelligent as well. Remember, they have the DNA of a Poodle inside of them. They have the ability to learn a lot of tricks, and they love to keep their minds busy at all times.

Because parti Maltipoos are so clever, and aware of it, when not trained properly, these dogs can also become stubborn. To avoid this, start training them right away. Positive reinforcement training is the way to go, and make sure you keep the training sessions short and sweet. When given the attention they need, these dogs will be the smartest, sweetest, most loving, and most attentive dogs one could ever wish for. And in addition to that, if you get yourself a black and white Maltipoo, you will also have a rare variety of this hybrid dog. Can’t get much better than that, right?

Are black and white Maltipoos rare?

Yes, they can be considered rare. Sure, they aren’t as rare as a completely black Maltipoo, however, they aren’t nearly as common as a completely white or cream Maltipoo. In addition to that, these dogs are also pretty darn adorable. Because there is so much variety when it comes to their black and white patches, you can’t really ever find two identical parti Maltipoos. All of them are unique little snowflakes, and stunning in their own ways.

Because parti Maltipoo dogs are a bit harder to find, there is a possibility that you will have to look for a bit longer to find one of these puppies. But your efforts will be so worth it in the end. In addition to the fact that they are harder to come across, there is also a possibility that you will have to pay a bit more to call one of these dogs your own. That will mostly depend on the demand for b&w Maltipoos in that given moment.

What is the most common Maltipoo color?

The most common color of a Maltipoo is by far white. That’s pretty predictable, as both of the parent breeds are most likely found in these colors as well. Another common one is the cream Maltipoo. So if you don’t really care about color, and you just want a Maltipoo puppy, you can go for a white or cream Maltipoo. A true white Maltipoo puppy shouldn’t have any patches of a different color anywhere on its body. However, their coat can have a slight beige tint to them. Their coats are usually thick and soft, but it lacks the luxurious shine that the darker color variations have. But that doesn’t make white or cream Maltipoos any less pretty! 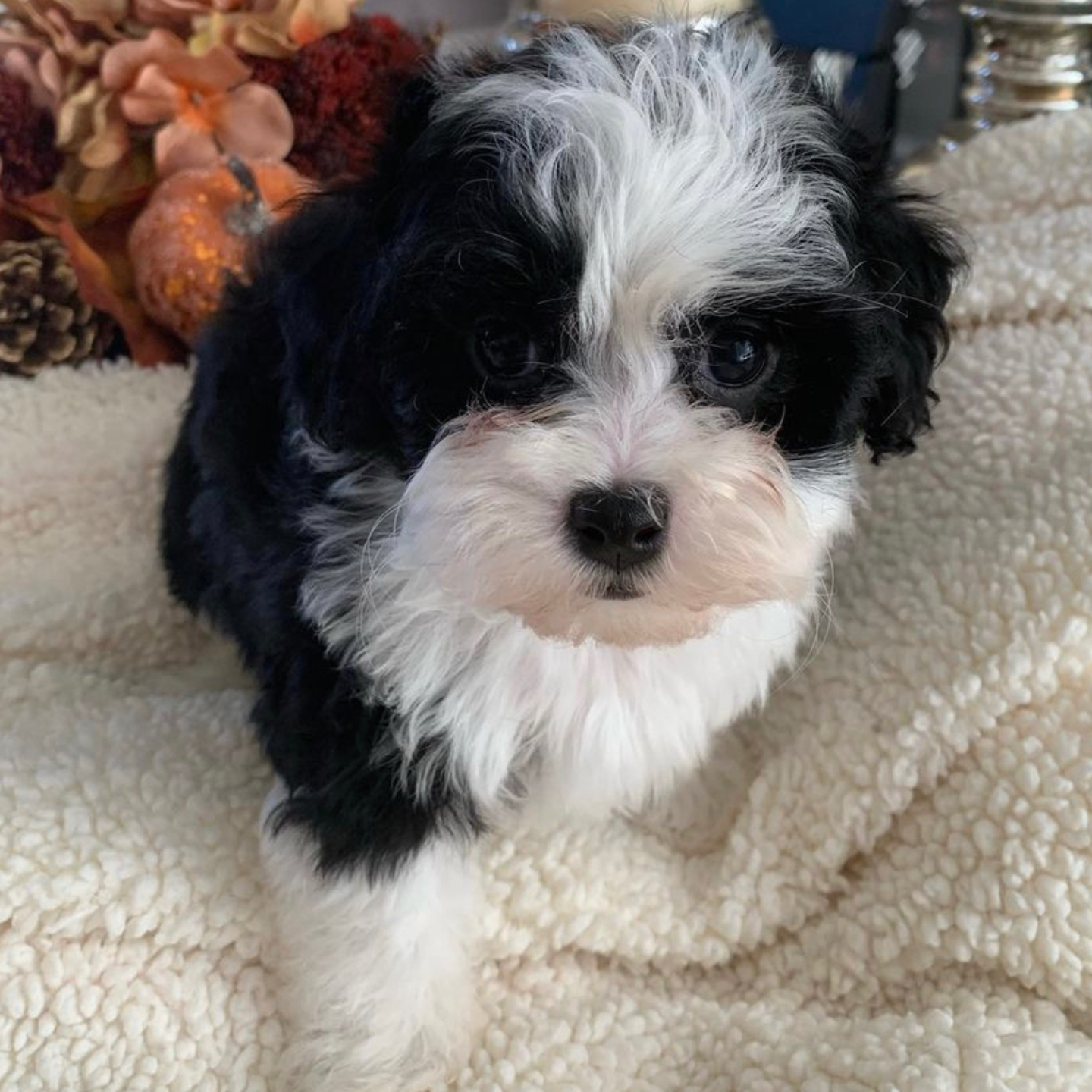 What is the rarest Maltipoo color?

Now that you know what the most common Maltipoo color is, you might be wondering about the rarest. Well, it isn’t the black and white Maltipoo. Even though they are rare, they aren’t the rarest ones out there. If you want a Maltipoo color that you can be certain not a lot of other people will have, then opt for a darker solid color, like a full black Maltipoo. It’s incredibly rare to find a completely black Maltipoo that doesn’t have at least one patch of white on his back or chest.

But that isn’t the only rare Maltipoo color. If you are familiar with rare Poodle colors, you might be aware that there are rare patterns available as well, such as the Phantom Poodle or sable Poodle. There is even a rare merle color variation. Finding Maltipoos with these hues will be incredibly difficult, but if you do come across one of these, you can be certain that you won’t come across a dog similar to yours in the dog park. However, be prepared to pay a little extra when buying a Maltipoo puppy.

How much is a black and white Maltipoo?

The price of a Maltipoo can range massively! You could pay anywhere from $500 to $2,500. It depends on many factors, like the current demand, your location, the age of your puppy, the color you are going for, and who you are buying from. The rarer the color that you are going for, the higher the price could be. But there is another, much more important thing.

When buying a puppy, you basically have four options — reputable breeders, backyard breeders, puppy mills, and Maltipoo rescues. Because Maltipoos are so popular and loved, the chances of coming across one in an animal shelter are pretty slim. When it comes to puppy mills and backyard breeders, they will offer lower prices, but no one can guarantee that you will end up with a healthy puppy. Reputable breeders can and should charge more because they do the necessary health tests to make sure your puppy is as healthy as it gets.

But now, let’s see how much you would have to pay for a black and white Maltipoo. Now, while this is indeed a rare color combination, it isn’t the rarest one, as we have already clarified. Therefore, for one of these puppies, when bought from a reputable breeder, it would be common to pay somewhere around $1,500. But that can of course vary. 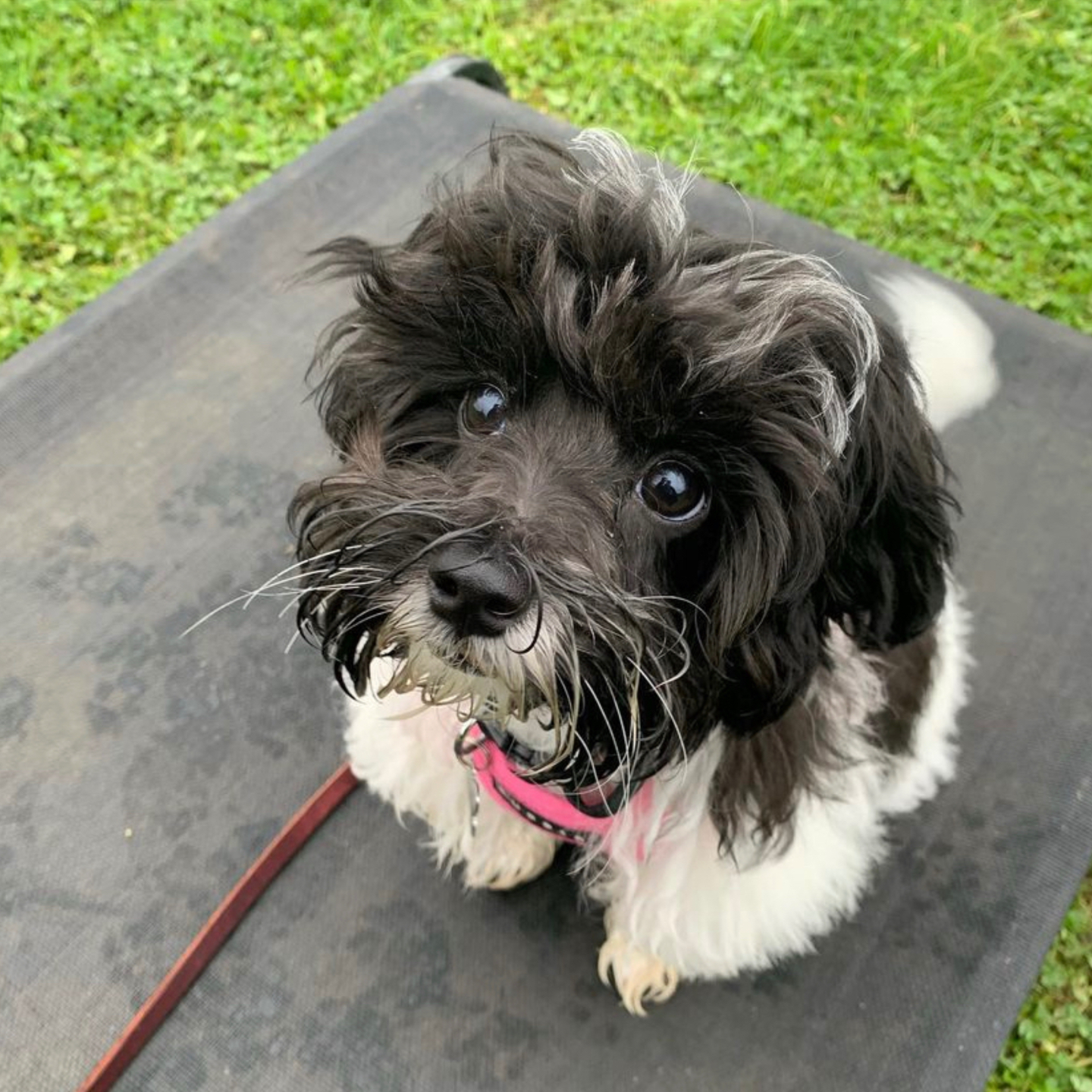 Should I get a black and white Maltipoo?

That is a question only you can answer, but in our opinion, for most people, the answer could be yes! These happy dogs make amazing family pets, and they even do well in small spaces, which makes them great apartment dogs. It’s no wonder that this is one of the most popular designer dogs in the United States. But we have to note that it wouldn’t be a good idea for everyone to adopt one of these dogs. First of all, because of their small size, these are very gentle dogs, so you should only get them if you have older children. They don’t tolerate rough play, and they could easily be hurt.

Additionally, you have to make sure you are buying from a reputable Maltipoo breeder. They should do all the genetic testings to ensure your dog doesn’t have any health problems like Legg-Calve-Perthes disease. Maltipoo owners also need to be aware of other responsibilities that come with having one of these dogs, like grooming, training, vet visits, and more. While they don’t need a lot of exercise, they still need daily activity. But a few daily walks will also help you and your dog form a good relationship. Also, because this is a designer breed, you have to remember that the parti Maltipoo can’t be registered with the American Kennel Club in the United States. But that shouldn’t stop most potential dog owners.