The Cane Corso Dogo Argentino Mix is a rare hybrid breed. Not much is known about them, but what we know will impress you.

This breed is a mix between the Cane Corso and Dogo Argentino. And to understand them better we have to take a look at both parent breeds.

Both breeds have similar traits. So, we can get a good idea of how they will be and what they will look like.

But, of course, because it’s a mixed breed there is no standard in how they look and act. We can give you only a vague answer. The mix can be more like one parent breed or the other. Or they can be a mix of both.

The Cane Corso and Dogo Argentino are strong and powerful dogs. So you can expect the same from their mix. Obviously, because they are designer dogs they aren’t recognized by the AKC.

The price of the Cane Corso Dogo Argentino mix tells you how rare and special these dogs are. A grown and trained dog can cost from 2000 dollars and up to 5000 dollars. If you buy them from a reputable breeder of course. Puppies will usually cost a little less.

But let’s first answer how these dogs look, then we’ll see how they are.

The Cane Corso Dogo Argentino mix is a large dog. Both the parent breeds are big dogs, so you can expect the same from the mix. These dogs have big bodies. But because of all the muscles they have, they look even bigger.

Because they are such big dogs, they are pretty heavy too. The average Cane Corso weighs between 90 to 120 pounds.

The Dogo Argentino is a large breed too. They are very similar to the Cane Corso in size.

So, what about the Cane Corso Dogo Argentino mix? Just like its parent breeds, the males are between 24 and 27 inches tall. They weigh between 80 and 100 pounds. Usually, the females are a bit smaller than the males. But it’s just one or two inches.

Their coat is usually short and can be a mix of white and another color. The possible colors include black, white, fawn, grey. But given that the most common color in a Cane Corso is black, and a Dogo Argentino is always white, you can expect their mix to be black and white.

As you can see, they really are big dogs. And if add their muscular build and strong body to that, you get a scary dog.

The Cane Corso Dogo Argentino is a great dog. But they are not for everyone. And definitely not for first-time dog owners. They are strong dogs that tend to be a bit spunky. So they need someone who will stay firm with them and let them know who the pack leader is. Their owners have to let them know who the dominant one is.

But these dogs can also be loving and gentle. And they love attention. It all depends on how you raise them. How you train and socialize them.

These dogs are usually used for hunting because they are so strong they could take down a pig. They are also full of energy and very active. So they also need a lot of exercises.

The Cane Corso Dogo Argentino is loving with its family. But with strangers, that’s not the case. They will be careful and even show a bit of aggression. The one word to describe them is intimidating.

I don’t want to lie, these dogs are aggressive. That’s a fact. They are guard dogs by nature. So they will do anything to protect you if needed. But they won’t act out on their aggressiveness without a reason if you socialize them.

Socialization is a must with every dog, but for this mixed breed, it’s even more important. Let them see as many people and animals as possible. Take them to as many places as possible. They need to get used to being surrounded by the unknown and stay calm. If you don’t do this you will end up with a very dangerous dog.

The Cane Corso Dogo Argentino is a generally healthy dog. Also, large dogs usually live longer than small breeds. So, the life expectancy of this mixed breed is between 12 and 15 years.

When it comes to their health, we have to look at the parent breeds. Both have many health issues they are susceptible to. So the Cane Corso Dogo Argentino mix can have a number of genetic health issues.

But you can avoid that by choosing a reputable breeder. A good breeder should have a health guarantee on his puppies. This is because they can do a gene test and make sure the puppies are all healthy.

Secondly, for your dog to be healthy you have to take them to the vet regularly. Feed them a healthy and balanced diet. And make sure they get enough exercise. For a dog this size and build 90 minutes to two hours of exercise a day is a must. This means long walks or even runs. And long play sessions. Also, don’t forget that they are very smart too. So, they don’t need only physical exercise, but mental stimulation too.

Lastly, some of the possible health issues your Cane Corso Dogo Argentino mix might have are:

These are the most common health issues in both parent breeds, so you can expect them in their mix too.

As said above, these dogs have short fur, but they still shed. So you will have to brush them twice or three times a week for their fur to stay shiny and healthy.

You don’t have to bathe them too often. Once in three months is enough. Or when they get dirty.

Training a Cane Corso Dogo Argentino won’t be easy. In fact, it’s going to be a real challenge even for experienced dog owners.

They will want to be the dominant one, so they need a firm, strong hand. Someone who will let them know that they are not the leader and that they have to behave.

The best way to train a Cane Corso Dogo Argentino is to do it in daily but short training sessions. This way you’ll keep their attention span high.

Generally speaking, all dogs learn great with positive reinforcement, when they are praised. So, that’s the approach you have to do with this mixed breed too. Praise them when they did something good and reward them.

These dogs are smart and will learn fast. You just need to know how to train them. Which is another reason why this dog is not for first-time owners. 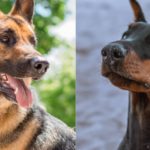 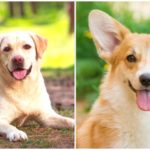