In the last couple of years, ear cropping in dogs has become a heated debate topic. More and more people are speaking up against this cruel procedure, but there are also many people that believe it’s necessary. For example, you’ll rarely see a Doberman without cropped ears. There are also breeds that don’t have their ears cropped, like Rottweilers. The Rottweiler cropped ears train has never left the station.

In this article we’ll talk more about the different procedures dogs have to go through and what experts really say about them.

* (only under full anesthesia)

Why do Rottweilers have their ears cropped?

Now you might be wondering why Rottweilers’ ears get cropped in the first place. Well, the truth is that the ear-cropping process is done mostly for cosmetic reasons. Some purebred dogs, like the Cane Corso or Great Dane, are better known for the cropped ear look. Owners even believe that they will have a better chance of winning at dog shows if the dog ears of their canines are cropped.

However, that’s often not the case at all. While cropped ears are in a lot of dog breed standards that are approved by the American Kennel Club, there is nothing in the AKC rules or standards that would prohibit your dog with uncropped ears to take part in dog shows. Which leaves the ear-cropping process to be done only for superficial aesthetic reasons. 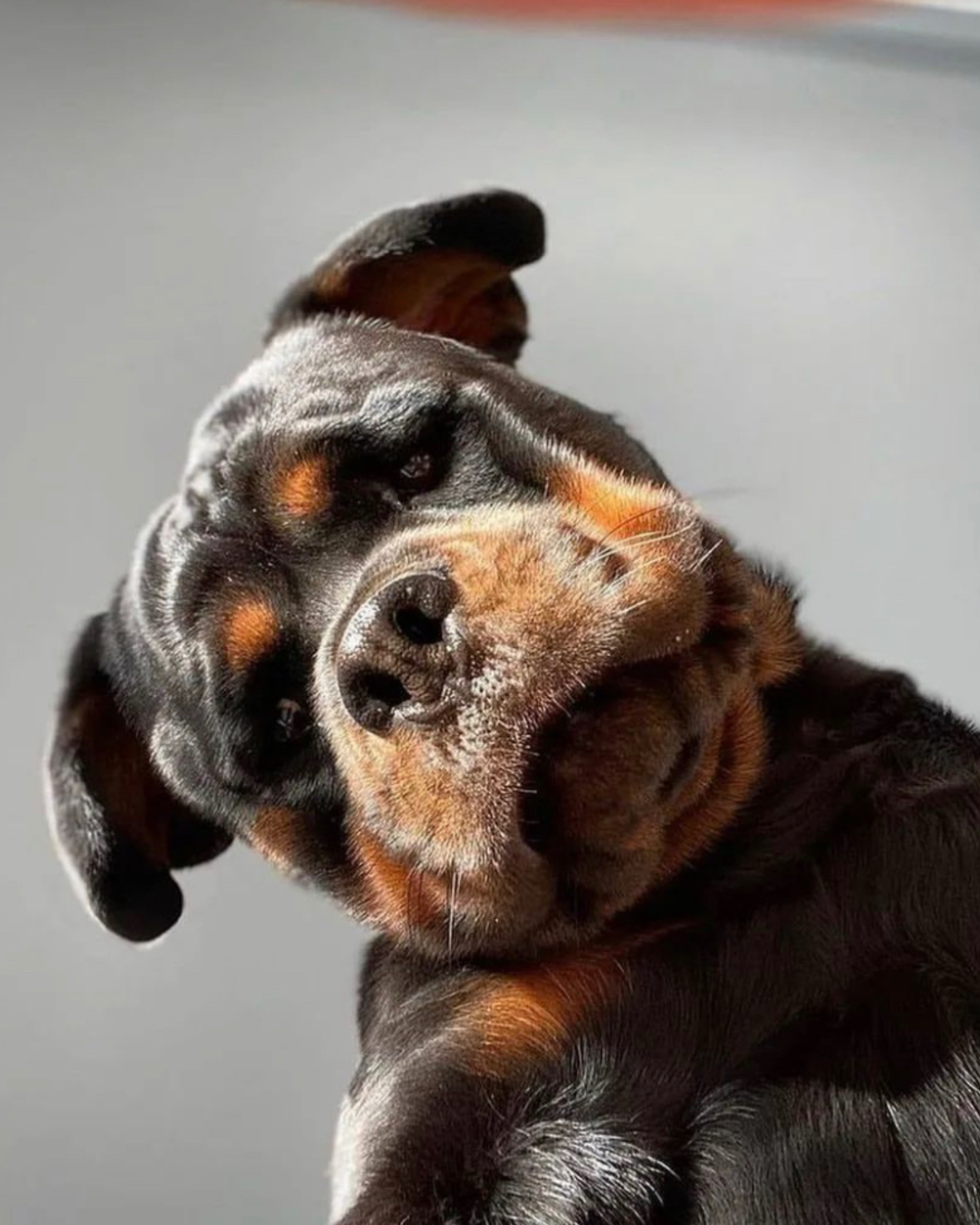 Do Rottweilers get ears cropped?

Yes, often they do. But it’s not nearly as common as with other breeds. Chances are that you are more used to seeing Rottweilers with uncropped ears, than with cropped ears. This surgical procedure is much more common in other guard dog breeds, such as Dobermans and Great Danes. Rottweilers are more commonly known for their floppy, triangular ears. But there are still people out there that prefer them with smaller, erect ears. However, as for the Rottweiler, their AKC breed standard does not include cropped ears.

Let’s first explain what ear cropping is and why people do it. Basically, it’s a cosmetic procedure for dogs. With this procedure, vets cut and shape the floppy part of a dog’s ears or the pinna. After this, the dog’s ears will stand up, instead of facing down. Take a look at this Doberman with his ears cropped and uncropped.

Would you recognize the Doberman without cropped ears? Probably not. That’s also the main reason why people have their dog’s ears cropped. It simply created that standard look of some breeds.

Now, the Doberman is not the only breed that has its ears cropped. There are many other breeds of dogs that have cropped ears: Boxers, Doberman Pinschers, Bully breeds, Mastiff breeds, Cane Corsos, Beauceron, Manchester terriers, Schnauzers, and others.

But how do vets crop a dog’s ears? The vet will put your dog under general anesthesia and cut off the floppy part of their ear. It’s needless to say that the only person who can crop a dog’s ears is a licensed vet, so someone who has a lot of experience doing it!

Another reason why someone would have their dog’s ears cropped is because of health. Some people believe it reduces the risk of infections. But that doesn’t make much sense and it isn’t true at all. There are also many dog breeds that don’t have their ears cropped, Rottweilers, German Shepherds, English Bulldogs, and so on. And none of them have severe ear problems if their owners take care of them.

Why do Rottweilers have their ears cropped?

As we have already explained, ear cropping is a cosmetic procedure. Dogs have their ears reduced with a blade or scissors to modify their shape, and to allow the naturally floppy ears to stand upright. Erect ears give dogs a more alert and watchful appearance, which could be a benefit for guard dog breeds such as the Rottweiler.

Ear cropping is usually performed when dogs are between 6 and 12 weeks old, depending on their breed and body. Larger breeds have their ears taped in position, with the help of tape, bandages, or other devices. The healing process could take up to a few months, and there is a high risk that the wound could get infected.

The main reason why some owners decide to get a puppy with cropped ears or crop the floppy ears of their pups is to follow a certain breed standard. We are just so used to seeing certain breeds with erect ears, that we almost don’t recognize them with their regular, bigger floppy ears.

But due to the fact that ear cropping is more and more frowned upon, floppy ears are finally getting the recognition that they deserve. Even in breeds such as the Doberman. At this moment, ear cropping is still legal in the United States, but Connecticut, Maryland, New Hampshire, New York, and Pennsylvania all prohibit ear cropping except by a vet while the dog is under full anesthesia.

Another cosmetic procedure that we do to dogs is tail docking or cutting their tail. Docking is when a vet removes a part of a dog’s tail. Vets will crop a dog’s ears when the puppy is 6 to 12 months old. But, the tail is cut when the puppy is just a few days old. This is because then the tail is still soft, and easy to cut off. Also, they do it without anesthesia.

You may also like:
If you are a veterinarian or pet store owner, refining and promoting your business is something you will often consider. Promotional products related to pets, such as Custom Enamel Pins for dogs, are a great way to do this.

You can give personalized pins with dog photos and store logos to your customers. This may be a more appealing way to promote your business than traditional advertising, and it can also bring a better service experience to your old customers.

If that isn’t cruel enough for you, wait till you hear the reason why no anesthesia is used. Basically, vets agree that the procedure must be super painful for the puppy. But, according to them the pup isn’t fully alert yet and won’t remember the pain…

A couple of years ago this procedure was only done on working and cattle dogs. But that’s not the case anymore.

Nowadays fifty to seventy breeds have their tails docked and some of them are:

Why did people dock the Rottweiler’s tail, and why is it rare to see a Rottweiler with tail? There are different reasons for that. But, to be honest, none is really legitimate and doesn’t make a lot of sense.

Some of the reasons for docking a dog’s tail are:

Now, we know that Rottweillers don’t get their ears cropped, but their tails get docked. But why is that? Why not crop a Rottweiler’s ears?

It’s simple, it’s not the standard for this breed. A Doberman’s ears get cropped because that’s the standard of how these dogs look like. But, a Rottweiler’s ears are not a key part of their look.

But, basically, there is no reason why you can’t crop a Rottweiler’s ears. If you want to do it, you can. But it’s not common to see a Rottweiler cropped ears.

Why is ear cropping good for dogs?

After learning all of the vile ways in which ear cropping affects dogs, you might be wondering if there are any benefits to it. While we have made it absolutely clear that we are against the act of ear cropping, we will try to be as subjective as possible when it comes to this topic. So let’s see if ear cropping can be good for dogs.

Yes, there are indeed a few ways in which a dog could allegedly benefit from ear cropping. It has been suggested that dogs whose ears were cropped could be less likely to suffer from infections of the ear canal. There are plenty of ear infections that are proven to be linked to dog breeds with long, hanging, and floppy ears. However, there is no scientific research behind this claim, and it’s just a  matter of speculation. In addition to that, it’s also believed that dogs with cropped ears are less likely to suffer from ear injuries, and that ear cropping improves hearing. However, there is no evidence to back these claims up as well.

There are also some benefits that the owners of these dogs could experience. For example, cropped ears give dogs an alert expression, which is the desired look for guard dogs. That is the reason why dog breeds such as the Rottweiler and Doberman get their ears cropped so often. Cropped ears are also described in certain breed standards that are approved by the American Kennel Club.

Yes, there is no doubt in my mind that it is. First of all, all of the potential “benefits” aren’t backed up by science at all. There is no evidence that your dog will be healthier or that he will hear better once you crop his ears. This is simply a cosmetic procedure that has the potential to negatively affect your canine.

Many veterinary organizations, including the AVMA and AAHA, oppose ear cropping. While ear cropping is still allowed in the united states, it has been deemed unacceptable in the United Kingdom and most European countries. Ear cropping is especially cruel if it’s done without full anesthesia because your dog WILL experience pain. However, even when it’s done under full anesthesia, the anesthesia itself is associated with certain risks.

The healing process is painful too, as most dogs experience discomfort due to re-taping, bandaging, and other post-surgery manipulations. Some dogs will need to have their ears taped upright for weeks or even months after the surgery! And all of that discomfort and pain only for a cosmetic procedure.

Some dog breeds have their tails docked or their ears cut right after they are born. This is especially done in breeds like Boxer, Doberman, and Rottweiler. Docking is illegal in many European countries, but it’s still done in the USA.

Even though more and more people are speaking up against these cruel acts we can’t deny that in the past it was a common practice to trim the tail and ears of certain dog breeds.

The biggest reason this was done was for aesthetics. Some dog owners find it nicer if their dog only has a “stump tail”. Other dog owners want their dog to look “dangerous” which they don’t with sweet, floppy ears.

If you ask us, this is a terrible tradition that should be banned in the USA too! It hurts the dogs and there isn’t a real medical reason behind it. And, lastly, isn’t it more humane to accept a Rottweiler with tail, or a Doberman with cute ears than to cause them pain?