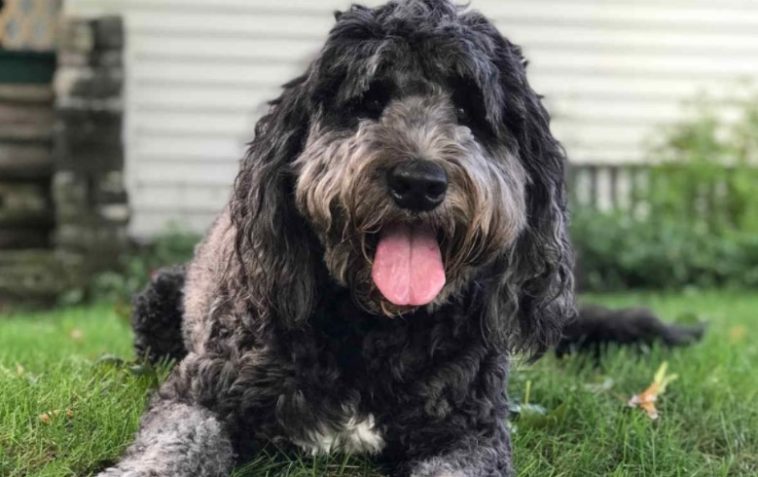 Saint Berdoodle are big dogs. They can be between 110 and 200 pounds heavy

The Saint Berdoodle is a mix between the Saint Bernard and Poodle dog breeds. You’re probably thinking that he’s just another designer dog. But you’re wrong.

Well, not completely. They are designer dogs. But they are also a dog like no other. I don’t think there is a nicer dog than the St Berdoodle out there. I am not kidding.

This dog is loving and kind and would do anything for its owners. Especially if it involves snuggling. They are real-life teddies.

I want to show you how great these dogs are. What they are like, how they look and maybe I’ll help you see that they are perfect for you!

Saint Berdoodle – What to know

Before I tell you more about the Saint Berdoodle a little reminder. This is a mixed breed. So we don’t know how exactly they’ll look or behave.

So, if you want this mixed breed, know that they maybe won’t be how you imagined. But, they are still great dogs.

Now, let’s see what the St Berdoodle looks like!

The first thing you’ll notice about the St Bernard Poodle mix is its size. They are large dogs! Of course, their size can vary depending on the size of the Poodle parent.

They can be between 20 and 30 inches tall. They can weigh anywhere between 70 and 180 pounds. Some can even weigh up to 200 pounds. Talk about giant!

ALSO READ Colorado Bulldog: What You Have To Know

Their coat can be either wiry and curly, like the Poodle’s coat. Or it can be long and smooth, like the Saint Bernard’s coat.

The color of St Berdoodles coat is usually a mix of two colors. The most common combinations are:

But, the color of the puppies depends on the parent’s coat colors.

So, are these dogs hard to take care of?

They’re not! They are a low-maintenance breed. If their coat is like the Poodle’s, you won’t have to brush them too often. But of course, they will need regular trims.

Also, you should bathe them once a month. Or when they get dirty.

Because they have a thick coat, don’t let them be outside for too long in hot weather. They can easily overheat.

There’s a good reason why I said these dogs are special. The Saint Berdoodle has the best traits of both parent breeds. There is no bad bone in their body.

The best words to describe this designer dog are “Gentle giant”. These dogs are huge, but they are also friendly and affectionate. They are also very loyal. They always want to do something with you and your family. No matter what it is. Even just a walk around the block. They love adventures and prefer going on runs, hikes, or walks over naps.

St Berdoodles are social dogs, so they hate being left alone. It would be best that someone is always home with them. Or at least, don’t leave them alone for long periods of time.

This mixed breed is a clever pup. So, training them won’t be hard.

But, are they good with kids?

Did you know that the Saint Bernard (one parent breed) is also called a “nanny dog”? This is because they are very protective of children. And because they love them so much!

But, no matter how good they are with kids, don’t let them play with your child unsupervised. St Berdoodles are large dogs and accidents can happen. For example that they sit on your child and hurt them.

Lastly, let’s take a look at the health of St Berdoodles. These dogs are very healthy and have a lifespan of eight to 12 years.

When you mix two breeds it minimizes genetic disorders. So, you’re getting a healthier dog. But, despite this, there are some health issues that can arise.

Some health issues this dog can have:

More serious health problems the Saint Berdoodle is susceptible to:

This is why regular vet visits and a healthy diet are important for the Saint Bernard Poodle Mix.

Also, never forget exercise. Which is another important factor in your dog’s health. They need at least one hour of exercise every day. But, with this breed, it’s better to have many short walks and play sessions. So, a couple of short walks, are better than one long.

Now, these dogs do have a lot of energy. But, also don’t worry if they just want to take a nap. That’s normal too. They need their rest.

The Saint Berdoodle is perfect for active families. They are also great with kids! With their loyalty and affection, these dogs will win over anyone. That is for sure!

But, also keep in mind that they are large dogs. They need their space. So, if you live in a small apartment, then skip this breed. They will feel best with a family who lives in a big house with a large yard. Somewhere they can play without being contained.

Also, they need a family who won’t leave them alone for too long. Otherwise, they will become destructive and end up chewing on your shoes or furniture.

Lastly, these dogs cost between 1000 and 2000 dollars. I know it’s a lot for a designer dog. But, if you really like the St Berdoodle, but don’t want to pay so much money there is still a way to get them.

You can check out your local shelter or a Poodle or Saint Bernard rescue! Adopting a pet is always better than buying one. Of course, you might not find a puppy, but you will find a great companion. 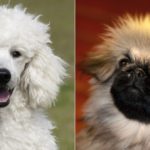 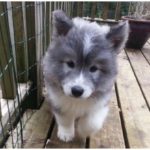