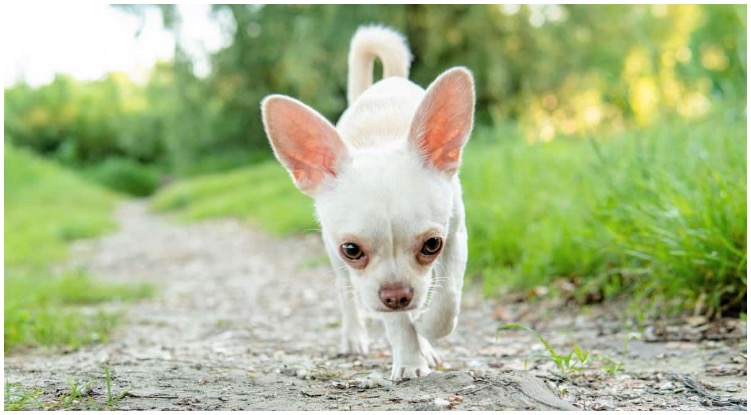 The white Chihuahua is nothing other than a Chihuahua with white coat. Their color is very rare. It also comes in two varieties, long or short. You’ll notice that these pups have radiant eyes, erect ears, and a light-colored nose. Usually, they weigh around 6 pounds and are the ideal lap dog for every urban dog owner.

Like we already said, the white Chihuahua comes in two varieties: the white long-haired Chihuahua and the white apple-head Chihuahua. Both varieties are equally lovely and will charm dog lovers with their unique appearance. Want to learn more? Let’s go!

First of all, we will talk about the white long-haired Chihuahua. It has no other markings and discolorations and their only distinctive trait is their long coat. To distinguish white from albino Chihuahuas are the dark features around the eyes and on the nose.

How to spot the white apple-head Chihuahua? The muzzle and forehead create a harsh angle of 90 degrees. When we compare to the long-haired Chihuahua, this Chi has a shorter coat. Also, the legs are short. The eyes are expressive. The overall look – unique! Want to learn more things? Keep reading!

Albino Chihuahua Vs. Pure White Chihuahua: Are They The Same Dog?

The fact is if you’re fond of all-white dogs, you must be able to determine the differences between a white puppy and an albino one. First off, albinism is a genetic condition, not only a coat color. The eyes, skin, and coat of albino dogs are completely without pigmentation.

However, logically white-coated dogs produce the color white, while albino dogs are white because of pigmentation absence. As simple as that!

Will A White Chihuahua Puppy Change Colors As It Grows?

The answer is yes! However, all Chihuahuas can have a coat color and skin color change. This is a process that happens gradually, and it appears to be perfectly normal. This is not happening just like that. There are many factors that contribute to the change, such as age, health issues, or environmental elements.

One fact is that many white Chihuahuas turn cream. However, this can be quite frustrating for a dog owner who was expecting to have a white Chihuahua in puppyhood and adulthood.

Also, another color change is the appearance of dark spots on the white coat. But, when this only happens is when the white color has been produced due to the spotting gene known as the S locus gene. Luckily for you and everyone, it’s quite uncommon for solid white Chihuahuas.

If you want to be 100% sure on owning a pure white adult Chihuahua, the best way to ensure this is to see the puppy’s parents first. It’s almost 100% correct that white Chis will produce all-white puppies.

Before we start, there are several factors that determine whether a dog can be recognized by an official kennel club or not. As we know, white Chihuahuas are rare, and breeding them is quite difficult. Thus, many people believe their acceptance to kennel clubs is questionable.

It’s true that the American Kennel Club (AKC) does recognize Chihuahuas. However, while Chihuahuas as a breed are recognized, some of their colors aren’t accepted by the club’s standards.

You don’t have to worry! White is, luckily, a part of the AKC color list; therefore white Chihuahuas are official and recognized.

Let’s see a list of factors that can disqualify a dog from being officially accepted:

1) if it has broken or cropped ears
2) if the Chihuahua weighs over 6 pounds
3) if a longhaired Chihuahua has a thin or almost bare coat.
4) if it has a bobtail or cropped tail

As we mentioned before,  the white Chihuahua is rare and one of the hardest Chis to breed. You should know that it takes many generations to make a perfect white Chi. However, this Chihuahua should have claws and a nose in a lighter color. Black pigment on the skin should be non-existent.

How Do White Chihuahuas Get Their White Coat?

It’s quite complicated to understand the concept of genetics, and you must know that there are recessive and dominant genes. The full white coat of a Chihuahua has been at the mercy of its gene pool.

As with everything, genes play an important role in determining a dog’s appearance. It controls the pigments produced (eumelanin and pheomelanin) and where they are produced. You should know that the two types of pigment make a wide range of dog coat colors, including white.

White Chihuahuas developed a white coat primarily because their parents don’t have black pigments in their genes – which does make sense. Since black is dominant and is absent from the parents’ genetic makeup, the offspring come out white as well. Already thinking of getting one? Why not – hurry up! 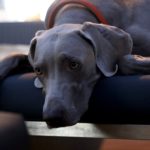 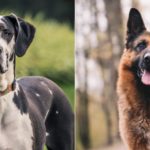